The left-handed opener was on 18 then and Dushmantha Chameera, the unfortunate bowler, had already started celebrating till he saw Kusal making a hash of that chance 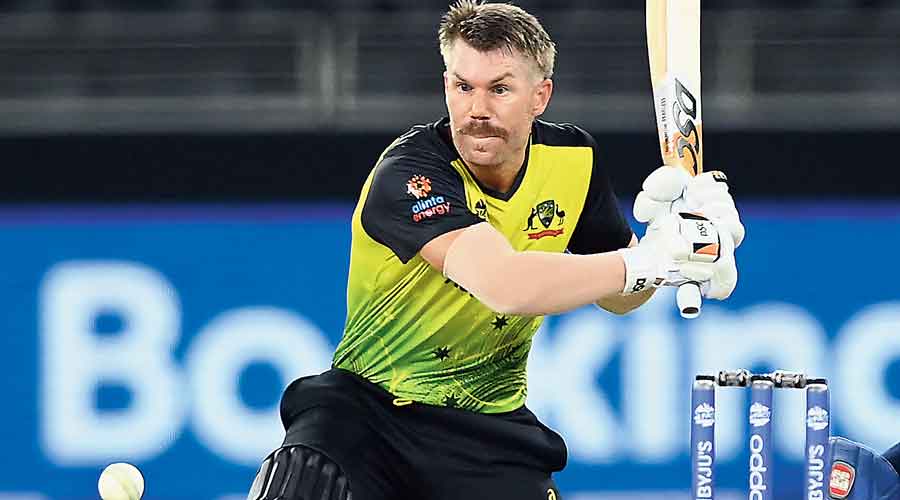 Practising on a polished concrete surface in Dubai seems to have brought back the polish in David Warner’s batting. And with better conditions at the Dubai International Stadium, Warner returned to runs and produced a commanding knock of 65 off just 42 balls that helped Australia canter to a seven-wicket win over Sri Lanka in Thursday’s Super 12 Group I game.

Courtesy their second straight win, Australia, with four points, are on a par with current group-toppers England but are placed second because of an inferior net run rate.

Like Warner, skipper Aaron Finch too was short of runs going into this game. Again, just like Warner, Finch too had practised on concrete pitches to get himself ready. The move helped him too as he did the bulk of the scoring early on in Australia’s pursuit of a 155-run target.

Of course, Warner’s lean patch would have been extended had Kusal Perera not dropped a dolly behind the stumps. The left-handed opener was on 18 then and Dushmantha Chameera, the unfortunate bowler, had already started celebrating till he saw Kusal making a hash of that chance.

If not for the wicketkeeper’s bungle, it certainly would have been a timely breakthrough for Sri Lanka as just prior to that, Finch was severe on Lahiru Kumara. The pacer bowled at close to 150kph, but gave too much of width for Finch to latch on to.

Finch departed much against the run of play off Wanindu Hasaranga, but had already done the damage as Australia had romped to 70 within seven overs of their run-chase. Warner too was very well set by then.

Man of the Match Adam Zampa in Dubai on Thursday.
AP/PTI

Before the Warner and Finch show, the job was first done by leg-spinner Adam Zampa, who struck twice and bowled 12 dot balls as well. Precisely, Zampa was the main reason behind Sri Lanka not progressing beyond 154/6 after being put in to bat.

Charith Asalanka and Kusal had the Sri Lankans well placed at 79/1 in the 10th over. But Zampa forced Asalanka and Avishka Fernando into making mistakes, while a superb yorker from Mitchell Starc sent Kusal back as Sri Lanka slumped to 94/5 in the 13th over.

Sri Lanka head coach Mickey Arthur was vocal about “mystery spinner” Maheesh Theekshana’s abilities. But the 21-year-old, with an Ajantha Mendis-like action, dished out mainly straight deliveries that hardly posed problems for the likes of Warner and Finch.

What actually is Theekshana’s mystery ball remains a mystery.