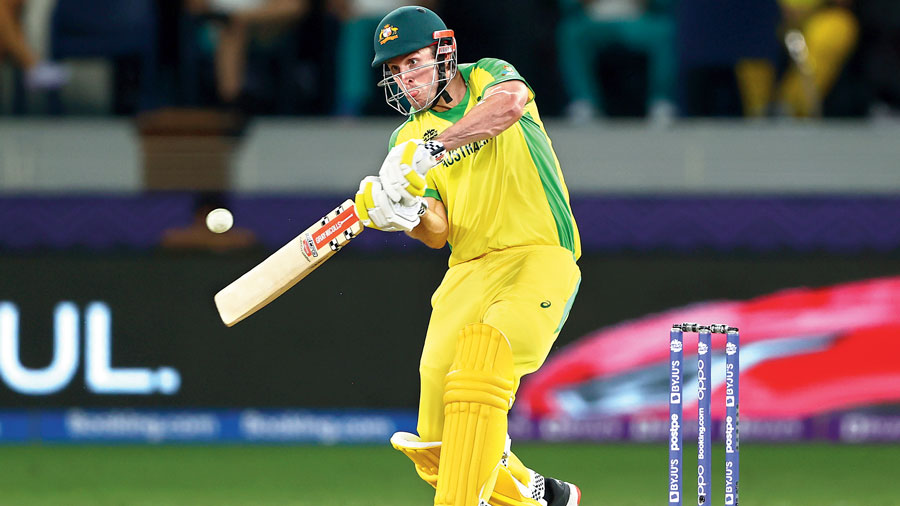 Mitchell Marsh of Australia on way to his unbeaten 77 against New Zealand during the T20 World Cup final in Dubai on Sunday.
Getty Images
Sayak Banerjee   |   Published 15.11.21, 01:47 AM

Australia, whenever they are in the final of a World Cup, are the toughest team to beat. New Zealand, despite all the hard work, lack the killer punch in big games. Both these facts were proved once again at the Dubai International Stadium on Sunday as the Aussies were crowned champions of the T20 World Cup while the Black Caps retained their tag of being the nice guys of world cricket who don’t win white-ball trophies.

Despite losing the toss, New Zealand were set up nicely by captain Kane Williamson (85), who regained form in the game that mattered the most. But that was not enough to outplay Australia.

The Aussies now have achieved almost everything on the cricket field.

Warner must surely be more than relieved, having played a crucial role in Australia’s first major success since that humiliating 2018 ball-tampering scandal in South Africa, of which he and Steve Smith were chief protagonists. The left-hander also shut those critics up who questioned his abilities as a batsman when he wasn’t getting it right for Sunrisers Hyderabad in the IPL. The way Warner batted in Sunday’s final, as well as in some of the preceding games, proves how unwise it was to underestimate him.

Thanks to Warner, Marsh, and the bowlers, led by Josh Hazlewood (3/16), Aaron Finch too joins Allan Border, Steve Waugh, Ricky Ponting and Michael Clarke on the list of Australia’s World Cup-winning captains. Something he would definitely be proud of.

New Zealand were indeed charged up after Williamson’s quality knock brought the team back in the contest from a precarious position. Williamson began the defence with Trent Boult so that danger-man Warner could be dismissed early. Boult did strike, picking up Finch.

But little did the Black Caps know that Marsh would go on to make it a black day for them. Off the very first ball he faced, Australia’s No. 3 batsman thrashed a rank poor delivery from Adam Milne over long leg. He made his intentions clear.

Racing to 14 off his first three balls, Marsh just continued with his awesome display of power-hitting. And with Warner solid at the other end, the game gradually slipped from New Zealand’s grasp.

What made matters tougher for New Zealand was the spinners, Mitchell Santner and Ish Sodhi, getting negated. Bowling second in Dubai hasn’t been easy in the first place, while Sodhi, particularly, served too many loose balls on a platter to Warner and Marsh during their game-turning 92-run partnership. Barring Boult, all the other bowlers bowled too short to Warner and Marsh.

Much of the credit goes to Warner for being at the top of his game right through, as his confidence rubbed off on Marsh, who carried on even after Boult dismissed Warner much against the run of play.

Thanks to Marsh, Glenn Maxwell, who was struggling for runs till this final, could also settle down and get a few hits going to score the winning runs and finish as the other unbeaten batsman.

Accounting for New Zealand’s semi-final hero Daryl Mitchell early, who was the first of his three scalps, Hazlewood threw a spanner in the Black Caps’ works when he struck twice in the 18th over of their innings. With his defensive bowling skills complemented by his impeccable accuracy, Hazlewood mixed it up mainly with his knuckle ball to break the Williamson-Glenn Phillips stand for the third wicket, dismissing both of them and denying New Zealand at least 10 to 15 more runs at the death.

Barring the dropped catch that let Williamson off when the latter was on 17, Hazlewood had a fantastic game with the ball.

Even Adam Zampa continued with his good work, taking the important wicket of a set Martin Guptill, while Pat Cummins was again economical.

With a little bit of help from fortune, Williamson played a glorious knock to single-handedly bring New Zealand back in the final. He used the reprieve as a launch pad for his assault on the Aussie bowlers, particularly on Starc.

In the end, owing to Warner and Marsh, Williamson remained the tragic hero. While New Zealand have to be content with the inaugural World Test Championship title for the time being.