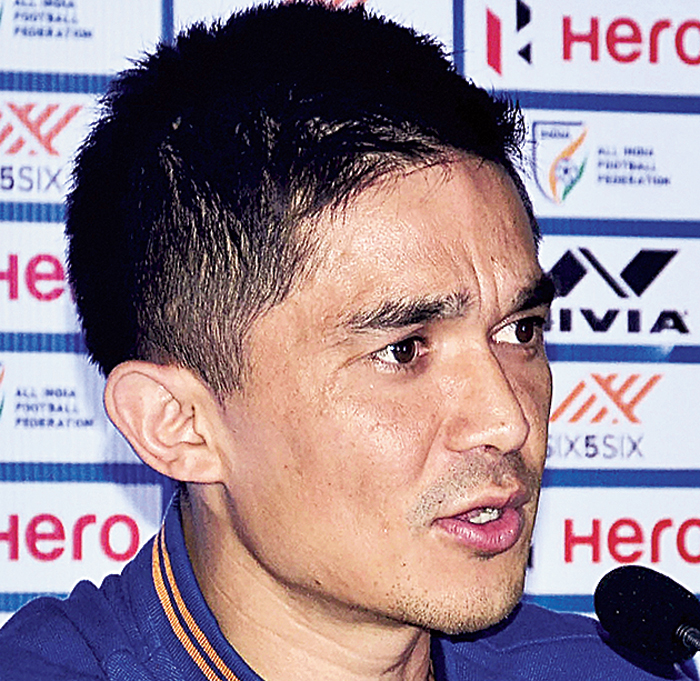 Chhetri did not attend a single practice session from the time the Indian team landed in Doha and was taken to a local hospital for a check-up on Monday
Telegraph file picture
TT Bureau   |   Calcutta   |   Published 09.09.19, 09:45 PM

Sunil Chhetri may miss India’s 2022 World Cup Round II qualifier against Qatar on Tuesday. Chhetri is down with fever and the scene is not looking bright at all for the India captain.

Chhetri did not attend a single practice session from the time the Indian team landed in Doha and was taken to a local hospital for a check-up on Monday.

With Chhetri set to miss the match, it will be a huge blow to Igor Stimac’s men. Chhetri had scored the goal against Oman in Guwahati, a match India lost after letting in two late goals. In Chhetri’s absence, the onus will be on the likes of Balwant Singh and Manvir Singh to make the most of this opportunity. Gurpreet Singh Sandhu may wear th captains armband.

Ranked 62nd in the world, Qatar will start the Group E match against their 103-ranked opponents as overwhelming favourites. They will look to claim their second consecutive win after crushing Afghanistan 6-0 in their opener.

India faced a lot of criticism after the 1-2 loss to Oman with questions being raised about the players’ fitness level. Stimac, though, refused to believe fitness was a reason behind the loss. “Many people mentioned fitness (was the problem). It’s easy to find that with numbers, runs and distances... we were very good. But the effectiveness of the runs is what matters.

“Effectiveness comes with experience. They (Oman) knew exactly when and how to run. In the last 30 minutes, we were putting too many sprints and wasting a lot of energy and it cost us,” the Croat said at the pre-match media conference.

Stimac said his team has had very little time to prepare for the big game against Qatar. He was candid enough to say India were more focused on their game against Oman in which they had a realistic chance of getting at least a point.

The last time the two sides played an official match was in September 2007 in the World Cup qualifiers where Qatar had thrashed India 6-0.