Advertisement
Home / Sports / Spark from Dhoni that got Ruturaj going

Spark from Dhoni that got Ruturaj going

Youngster doesn’t wish to get carried away after IPL success 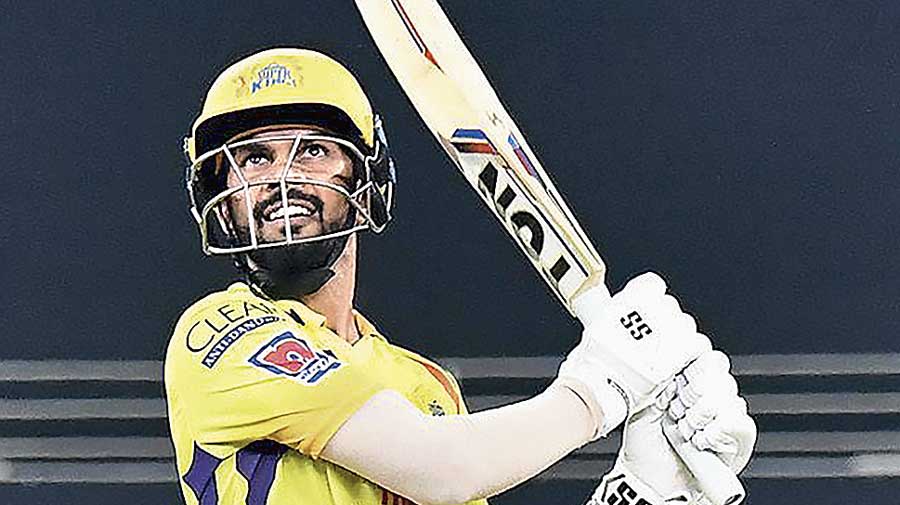 Ruturaj Gaikwad sparkled and showed the much-needed spark that Mahendra Singh Dhoni found wanting in some of the youngsters of Chennai Super Kings in this year’s IPL.

His performance at the top of the order couldn’t alter the script for Super Kings, who for the first time couldn’t make the knockouts of the IPL. But it did enable them to finish on a good note, while he became the first uncapped Indian to score three consecutive half-centuries in the competition.

Dhoni’s words, though, had no bearing on Ruturaj as he preferred to focus on how the Super Kings captain inspired him during training sessions. “I didn’t read much into what MS had said and I never felt he intended that way,” Ruturaj told The Telegraph from Pune.

“He must have thought of something and said, but people took it the other way. What he said didn’t matter to me or didn’t even get to my head. At nets, he would advise me regarding my batting and on top of that, he has always liked my batting.”

Looking back at that difficult phase when he tested positive for Covid-19 soon after reaching Dubai and then tallied only five runs from his first three innings, Ruturaj stressed the support he got from Dhoni, head coach Stephen Fleming and the rest of the support staff helped him stay in a positive mindset.

“I was expected to perform since I had done well in domestic cricket. But Covid, first of all, made things disappointing for me. Because of the 15-day isolation, I was a little bit low and homesick.

“However, the players and coaching staff supported me right through that phase. MS and Fleming remained constantly in touch with me and kept encouraging me. That helped me relax, stay calm and take care of my mental health too.

“Now, it’s difficult to come out of isolation and play a match straightaway... Didn’t hold a bat for so many days and suddenly got to play an IPL game. But I always believed I would do better with more practice… I also got the feedback that my team had faith in my abilities.

“At nets, MS used to tell me, ‘just make sure your process is right and don’t worry about the results.’ I just followed that,” Ruturaj said.

Being one of the few youngsters to have made an impact in this IPL, the 23-year-old top-order batsman from Maharashtra is careful at the same time of not getting carried away.

“Yeah, I’m a little more confident than how I was in the previous season. But I’ve always had faith in myself about making meaningful contributions for my team and succeeding at the IPL level because I knew I also had the capacity to bounce back from tough times.

“Having said that, I don’t want to get carried away as my focus is now on the next assignment.”

“It was lockdown in Pune, a hotspot region, while there was a lot of rain too then. But I could practise at Dilip Sir’s academy.

“I asked for his permission and he agreed, providing me with the opportunity and facilities. He has never said no to me. So I had a good 10-15 days of practice (in August),” Ruturaj emphasised.