This was country's first major title since they hosted and won the 1996 Men's Africa Cup of Nations, a few years after the end of apartheid 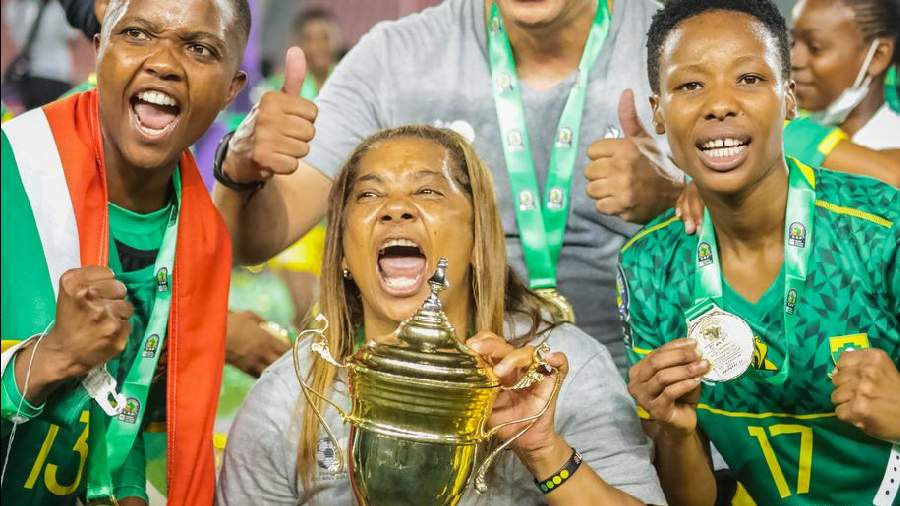 Calls for equal pay have increased after South Africa won their first Women's Africa Cup of Nations title in Morocco. The victory comes after years of planning and investing in the game.

While the winners of the WAFCON received a 150% increase in prize money from the last tournament in 2018, the $500,000 reward is a far cry from the $5 million that Senegal, the men's African champions, received earlier this year.

"You deserve equal pay for equal work that you do," President Ramaphosa said during a reception for the "Banyana Banyana" in Tshwane. "You get ten times less than the men when they play and that has to come to an end.

Joy for a hopeful country

On Saturday night, South Africa won the country's first ever WAFCON title in front of a record 60,000 fans in Rabat.

Hildah Magaia scored a brace as they defeated hosts Morocco 2-1. It had taken 22 years since they first appeared in the final on home soil to finally claim victory.

The grit and frustration faced by previous generations of players had finally coalesced into a fulfilling triumph inside the Prince Moulay Abdellah Stadium when captain Refiloe Jane and her teammates lifted the trophy.

South African Football Association President Danny Jordaan has said in the past that they planned to give equal prize money to the women's team. He also hopes that the victory can help push South Africa's bid to host the FIFA Women's World Cup in 2027.

"If a team does well, it is easier to convince people that you're a footballing nation and you can accommodate the world," Jordaan told the local Sowetan newspaper.

South Africa will play at their second World Cup next year. Going to New Zealand and Australia as African champions could give them the momentum they need to truly make an impact on the global stage.

Across South Africa, there was widespread celebration. It was the country's first major title since they hosted and won the 1996 Men's Africa Cup of Nations, a few years after the end of apartheid. It's a victory that brings back a lot of nostalgia.

Hundreds of fans thronged into Johannesburg's O.R Tambo Airport on Monday as the team returned from Morocco. The fans sang, beat drums and blew on vuvuzelas while waving national flags in delirious frenzy as their heroes came bearing the shiny new trophy.

Banyana Banyana's victory was a culmination of a lot of hard work and planning by the South African FA. Giving more opportunities to women to control and direct the future of the game has yielded its first major fruit.

It is particularly great reward for coach Desiree Ellis, who captained the side when they lost their first WAFCON final in 2000 against Nigeria. She has become the face of women's coaching in Africa and was one of only three women who took charge of teams at the championship.

"The hard work and the sacrifices that you put in that no one sees … this is the reward. It didn't come easy because we've had a lot of heartache along the way," Ellis said.

"We got knocked out of the Olympics, we lost the final in 2018, lost the [southern African] COSAFA Cup recently. But we knew where we were going, we knew this was the ultimate and from the word go, when we started our training, we could see that the players were really determined."

South Africa can now build on this success to show that women's football is a good place to invest, according to former star player Portia Modise.

"We're ready for a lot of investors to come and invest in women's football so it can grow in our country," she said.