For P V Sindhu and HS Prannoy, it was also a good day in office as they also progressed to second round 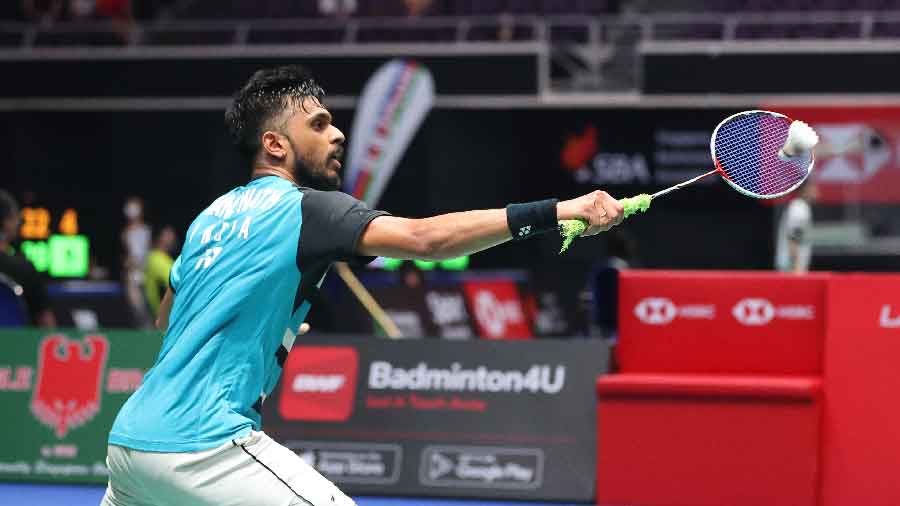 Indian shuttlers Mithun Manjunath and Ashmita Chaliha notched up stunning wins over their illustrious rivals to hog the limelight on the second day of the Singapore Open Super 500 tournament here on Wednesday.

The world No. 77 Mithun, a product of the Prakash Padukone Badminton Academy, will next take on Ireland's Nhat Nguyen, while Ashmita faces China's Han Yue.

For two-time Olympic medallist P V Sindhu and man-in-form HS Prannoy, it was also a good day in office as the two also progressed to the second round with facile wins.

Sindhu looked in complete control as she prevailed 21-15 21-11 over Belgium world No. 36 Lianne Tan to set up a clash with Vietnam's Thuy Linh Nguyen.

Prannoy, who had reached the semifinals at Malaysia Masters last week, saw off Thailand's Sitthikom Thammasin 21-13 21-16 and will next meet third seeded Chou Tien Chen, whom he had beaten at Malaysia Open recently.

London Olympics bronze medallist Saina Nehwal also avenged her India Open loss to compatriot Malvika Bansod with a 21-18 21-14 win to make it to the second round.

Manjunath, who had reached the finals of Orleans Masters Super 100 in April this year, came out all guns blazing as he dominated the opening game after taking an early 6-2 lead. He kept Srikanth at bay to comfortably seal the opening game.

Srikanth, however, turned the tables after the change of ends as he enjoyed a 11-8 cushion at the break and kept extending his lead to come back into the contest.

The decider turned into a roller-coaster ride with the two slugging it out but it was Manjunath, who showed better control as he ensured a slender one-point advantage at the breather.

Srikanth managed to take a 16-15 lead at one stage but Manjunath didn't let the opportunity slip and reeled off the last three points from 18-18 to notch up one of the biggest win of his nascent international career.

Manjunath, 24, has been in fine fettle as he reached his maiden Super-100 final at Orleans Masters in France last April. He had claimed four All-India ranking titles, including the Senior Ranking Badminton tournament in December last year.

Earlier in the year, he had contracted COVID-19 and had to withdraw from India Open Super 500 in January. He, however, made it to the Indian team for the Badminton Asia Team Championships in Malaysia after a semifinal finish at Syed Modi International and quarterfinals at Odisha Super 100.

Ashmita, world number 66, also dished out a superlative performance as he fought back from 5-10 down with an eight-point burst to zoom ahead and earn the bragging rights.

The 22-year-old from Assam kept up the tempo in the second game as well with an early 7-2 lead. Busanan cut it down to 6-7 but the Indian once again reeled off nine points on the trot to slam the door on her rival.

Earlier, Sindhu took time to get off the block, lagging 1-4 but she pulled away from 7-7 to never look back. After 11-8 lead at the mid-game interval, she kept moving ahead to pocket the opening game.

She continued the momentum in the second game with a 5-1 advantage. A three-point burst helped Tan to narrow the lead but a relentless Sindhu stepped up her game to seal the issue without much ado.

Among others, Pooja Dandu and Arathi Sara Sunil moved into women's doubles second round after Chinese Taipei duo of Hu Ling Fang and Lin Xiao Min withdrew from the tournament.

However, it was curtains for former Commonwealth Games gold medallist Parupalli Kashyap and world No. 29 Sameer Verma.

While Kashyap was no match for fifth seed Indonesian Jonatan Christie, losing 14-21 15-21, Li Shi Feng of China ended Sameer Verma's campaign with a 21-10 21-13 win in another lop-sided men's singles match.