Simon Katich on his gig as KKR assistant coach 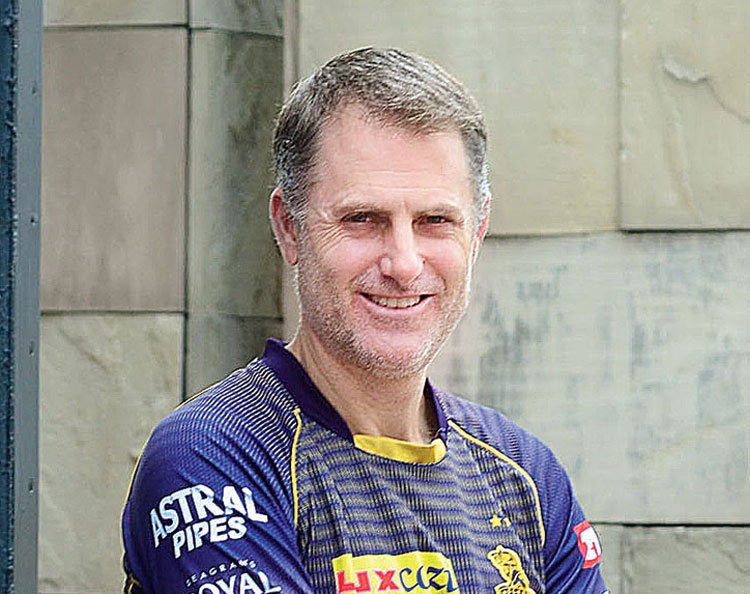 KKR assistant coach Simon Katich believes in easing pressure off the lads and getting them to relax. The Telegraphcaught up with him to know how he keeps our favourite players focused on the game.

So, what’s your earliest cricketing memory?

Ummm... probably playing on the front lawn at home when I was about four years old.

Do you have any favourite World Cup memories?

Oh! I think my favourite one initially was the 1992 World Cup in Australia. I went to see the final at the MCG (Melbourne Cricket Ground) and it was incredible to watch Wasim Akram in action!

Who was your cricketing hero growing up?

Definitely Sir Viv Richards. I grew up during an era when West Indies was dominant and I loved watching them play. He was my idol. I’ve been extremely fortunate to meet him and have some great conversations with him throughout my career. I think I met him for the first time in England in 2003, and I remember I was a bit shy to go up to him and chat, but my teammate said: “Come up, don’t be shy, we’ll chat with him”, and 40 minutes later, we were still chatting and he didn’t let me down. He’s a champion.

You’ve been with the Knights for quite some time now. How was your first experience stepping into Eden Gardens?

One of the great regrets I have of my career was that I never got to play a Test match at the Eden Gardens. Now that it’s my home ground for KKR makes it really special. The atmosphere is amazing and it’s incredible to get to come here.

So, since you’re a mentor and an assistant coach, how do you get the boys to loosen up after practice? Is it tough to juggle the caps of a strict disciplinarian on pitch and a chilled-out friend off it?

Yeah, I think away from cricket I’m pretty relaxed. There are times when we do get frustrated with little mistakes that happen, and that is human nature. But more often than not, we try to be as positive as possible because ultimately the boys are going through a lot of pressure and cricket is an intense game and you have to be as relaxed as possible and trust yourself and the boys.

You and Jacques (Kallis) were on opposite sides of the pitch during your playing days and now, both of you are working together to help the Knights win the trophy! What is your equation like?

I obviously had a huge amount of respect for Jacques as a player. We had some great battles on the field and I do joke with him that while he did knock me over a few times, I did get some runs against him as well (laughs)! But, we’ve worked well together.

Do you still get excited when you see a textbook cricketing shot?

Yes, absolutely! Especially in the shorter format of the game, where you see more unconventional shots, it’s always nice to see the classics make a comeback. (Smiles)

Talking about the boys, which Knight would you pay to watch play?

(Smiles) That is a tough question because you don’t want to be biased as a coach. Last year we got an opportunity to work with Shubman Gill. He was 18 and it was his first IPL and to see the amount of ability he had at that age was fantastic! It’s been great to see Nitish Rana’s progress and I think Rinku Singh will also get more opportunities in time.

This is the tough part. Who’s the prankster in the team?

(Chuckles) Umm... earlier it was Brad Hogg! Now Rinku Singh is up there and he’s always making the boys laugh with his characters and hairstyles. Harry Gurney’s got a good sense of humour.

What about the party animal?

And is there anyone who forgets stuff?

Ummm... there’s no doubt there is, I’m just trying to remember who it is. It’s probably me, given that I can’t remember! (Laughs)

As a coach, what’s the weirdest excuse you’ve heard of someone not being able to come to practice?

I think the best one was at an optional session we had a few years ago and one of our coaches, Wasim Akram exercised the ‘option’ and didn’t come to training.

And what excuse did you give to skip practice?

I never skipped practice. I loved it!

Can you share the weirdest fan encounter you’ve had?

Probably in Zimbabwe, when a lady on the boundary line asked me to sign her bra. Yeah, that was the first time I’ve had to do that! (Laughs) I went a bit red actually, I was quite embarrassed!

Since travelling is an integral part of the life of every player and coach, what are your travel essentials?

I would say my KKR neck pillow for flights. My backpack is a must. I always carry water and snacks, because I get hungry on planes.

What is your favourite travel destination?

What’s your favourite thing about Calcutta?

Ummm... what’s the mustard fish dish?… (We prompted him that it was shorshe ilish) I love that!

Have you picked up any Bangla in your time here?

Have you seen any Shah Rukh Khan films?

We did, about two years ago. We went for the premiere of Fan.

Well, I’m still yet to see a couple of Indian films that I’ve been a part of! (Chuckles) I think it was Victory, and there was another one we shot with Brett Lee where I was an extra, Andrew Symonds was in it… (t2 prompted him that it was Patiala House) Correct! Yes! So I should go and watch those.

You’re not on social media…

Oh no, I’m old school. I’d still have pigeons deliver letters if I could! (Laughs)

In that case, which is your favourite app?

What’s the best thing about being a father?

Seeing your kids progress and learn different things and develop relationships with yourself and your family is amazing.

Do they come to practice with you?

This is their first trip, so not yet. I definitely like bringing them to the afternoon games, but the evening games end a bit too late for them. I’d love to bring my eldest one to training, he’s eight, but I’m worried with all the balls flying around, since he might get hurt.

So are you like a strict father who says, ‘You’re grounded!’ very often?

Oh no he’ll prefer being grounded than watching. (Smiles)

What are you listening to?

I’ve got a playlist on Spotify and there is a variety of music that I like. One of the young guys in the team, Yarra Prithviraj and I have a similar taste in music. I like Guns N’ Roses and Metallica.

And what are you reading?

Not reading anything apart from my sons’ books at bedtime, which is Diary of a Wimpy Kid!

What are you currently watching?

I have been watching a lot of IPL to prepare for the team meetings, but when I’m at home, I watch a lot of the boys’ shows. I think my elder son likes this show called Deadly 60, which is all about deadly animals, while the younger one likes Crash Investigation Unit, a show about car crashes!

What do you do when you’re not playing?

Generally when I’m at home, I’m doing a lot of activities with my boys. I either help them with their schoolwork, or coach them in cricket, soccer or IFL football.

You also managed a football team. Which is the team you support?

My team is Richmond (Football Club) in the Australian Football League, but I’ve also been working at the GWS Giants (Greater Western Sydney Giants).

If you were not a cricketer, you would be...

I would’ve probably liked to play AFL football. Growing up, I either had a cricket bat in my hand or an AFL football. I did a commerce degree, so I might’ve been stuck in an office somewhere.