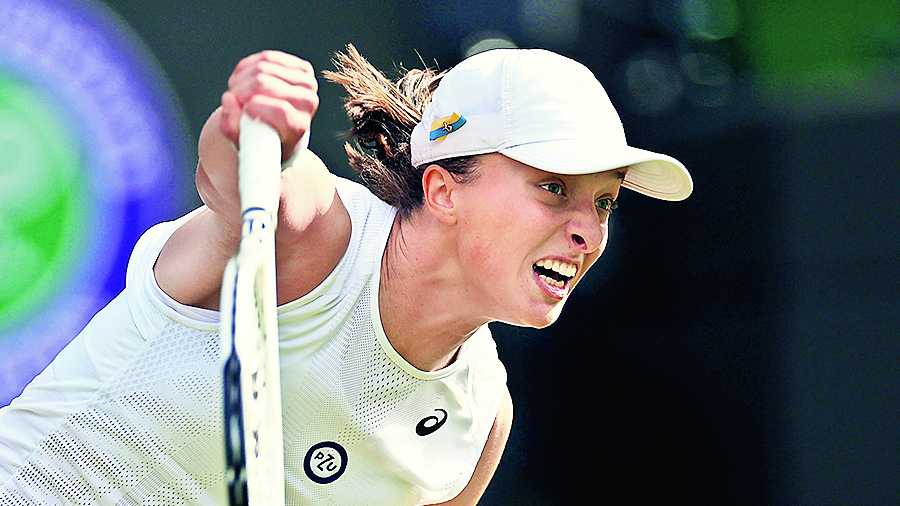 Some days at the office are bit of a grind, even if in Rafa Nadal’s case his place of work on Thursday was Wimbledon’s sunny but chilly Centre Court for a match against Ricardas Berankis.

The second seed duly won 6-4, 6-4, 4-6, 6-3 to reach the third round but his 307th grand slam match win, putting him one ahead of Martina Navratilova and fourth on the all-time list, will not linger long in his memory.

An off-key Nadal never looked in serious danger of having his bid for the calendar-year slam wrecked by the world No. 106, but he knows he will have to play much better in the rounds ahead to claim his third Wimbledon title.

World No. 1 Iga Swiatek struggled with unforced errors but found her composure when it mattered most to see off Dutch lucky loser Lesley Pattinama Kerkhove 6-4, 4-6, 6-3 to reach the third round and extend her winning run to 37 matches.

With Thursday’s victory, Swiatek went past Monica Seles and matched Martina Hingis’ run in the 1997 season. The all-time longest winning streak is held by Martina Navratilova, who had 74 successive victories in 1984.

“I mean adding another match to this number is pretty special for me but when I’m out there I’m not really thinking about that,” Swiatek said on court. Swiatek next meets Frenchwoman Alize Cornet, who earlier beat American Claire Liu 6-3, 6-3.

Former Wimbledon champion Simona Halep fought back from deficits in both sets to defeat retiring Belgian Kirsten Flipkens 7-5, 6-4 to power into the third round. The 36-year-old Flipkens, who is playing in her 50th and final grand slam, had a 5-2 lead in the first set and a 4-1 advantage in the second but the 2019 champion rallied on both occasions to complete the victory in straight sets.

It was the sixth win for Romanian Halep against Flipkens in as many matches and the duo hugged each other for a long time at the net after the match as the Belgian burst into tears as her singles career came to an end.

Twice former champion Petra Kvitova overcame a second-set wobble to reach the third round with a 6-1, 7-6 (7-5) defeat of Romanian Ana Bogdan. Kvitova is ranked 25th this time around.

Tunisian third seed Ons Jabeur continued her strong run on grass to reach the third round with an easy 6-4, 6-0 victory against qualifier Katarzyna Kawa of Poland.

Fourth seed Stefanos Tsitsipas romped into the third round with an accomplished 6-2, 6-3, 7-5 victory over Jordan Thompson. The win sets up a crowd-pleasing clash with another Australian, temperamental showman Nick Kyrgios.

Kyrgios delivered a devastating serving masterclass as he blasted past Serbia’s Filip Krajinovic 6-2, 6-3, 6-1.

Indian ace Sania Mirza and her Czech partner Lucie Hradecka were eliminated in the opening round by the Polish-Brazilian combination of Magdalena Frech and Beatroz Haddad Maia 4-6, 6-4, 6-2. Sania will still have a shot at glory, partnering Mate Pavic of Croatia in the mixed doubles event.