The Fijian striker played a stellar role, scoring one and getting involved in the other two goals 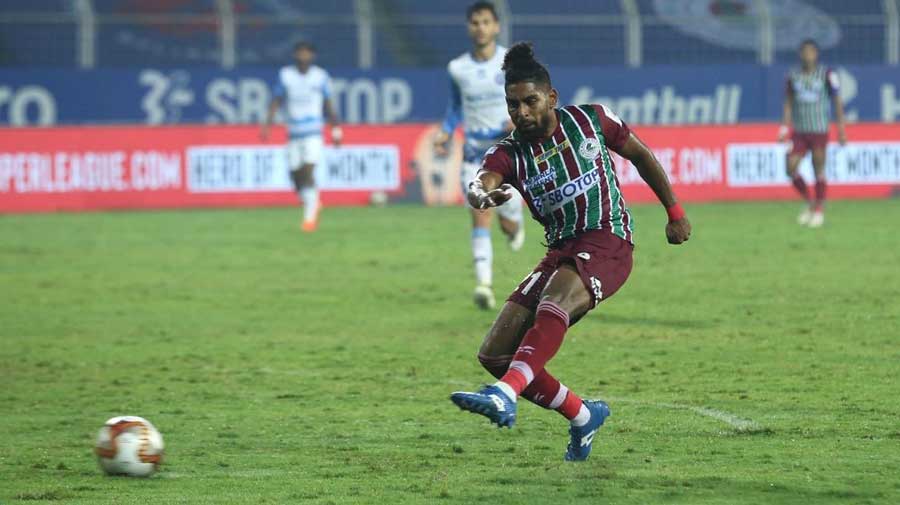 ATK Mohun Bagan would savour Friday’s 3-1 win over SC East Bengal for a long time. In the return-leg of the ISL VII Derby, played at the Nehru Stadium in Fatorda in blinding rain, Bagan toyed with East Bengal and could have won the match by a bigger margin.

Having won the first-leg 2-0, it was double delight for Antonio Lopez Habas and his men.

Man-in-form Roy Krishna (15th), David Williams (72nd) and Javier Hernandez (89th) scored once each for the league toppers, while Tiri’s own goal had put East Bengal on level terms much against the run of play at the fag end of the first half.

Krishna, as expected, played a stellar role, scoring one and getting involved in the other two goals. Every time Krishna had the ball, East Bengal defence pressed the panic button. At times it looked comical as the likes of Daniel Fox, Raju Gaikwad, Sarthak Golui danced to Krishna’s tune. If the first goal was all about Krishna’s touch and composure, the second and the third — his assists — showed his presence of mind.

And it’s not Krishna alone who sang in the rain, everyone played their role to the T. Whether it was Pritam Kotal, Subhasish Bose or Sandesh Jhingan, Bagan were miles ahead. They outthought, outpaced and outmanoeuvred their arch-rivals, who didn’t have any plan whatsoever.

Bagan did not have to wait too long to go one-up. In the 15th minute, Raju Gaikwad went on leave when Tiri sent in a beautiful long pass for Krishna.

The Fijian striker first received the ball, then with a deft touch went past a sprawling goalkeeper Subrata Paul before tapping it in.

East Bengal found the  equaliser in the 41st minute. Tiri scored an own goal after Gaikwad’s long throw-in kissed his head and went past Bagan goalkeeper Arindam Bhattacharya.

Bagan’s second came in the 72nd minute. Fox’s intended return pass to Matti Steinmann was snapped up by Krishna, who played square to Williams. Even as East Bengal defenders tried to close him down, Williams’s low shot gave Paul no chance.

The final nail in the East Bengal coffin came in the 89th minute.

On the break, Javi played a pass to Krishna who waited and waited for the Spaniard to find his space and then sent a delightful lob. Javi obliged with a header at the near post.

Mohammedan Sporting Club have decided to part ways with head coach Jose Hevia on Friday. Technical director Sankarlal Chakraborty will be in charge of the team for the remainder of the I-League.