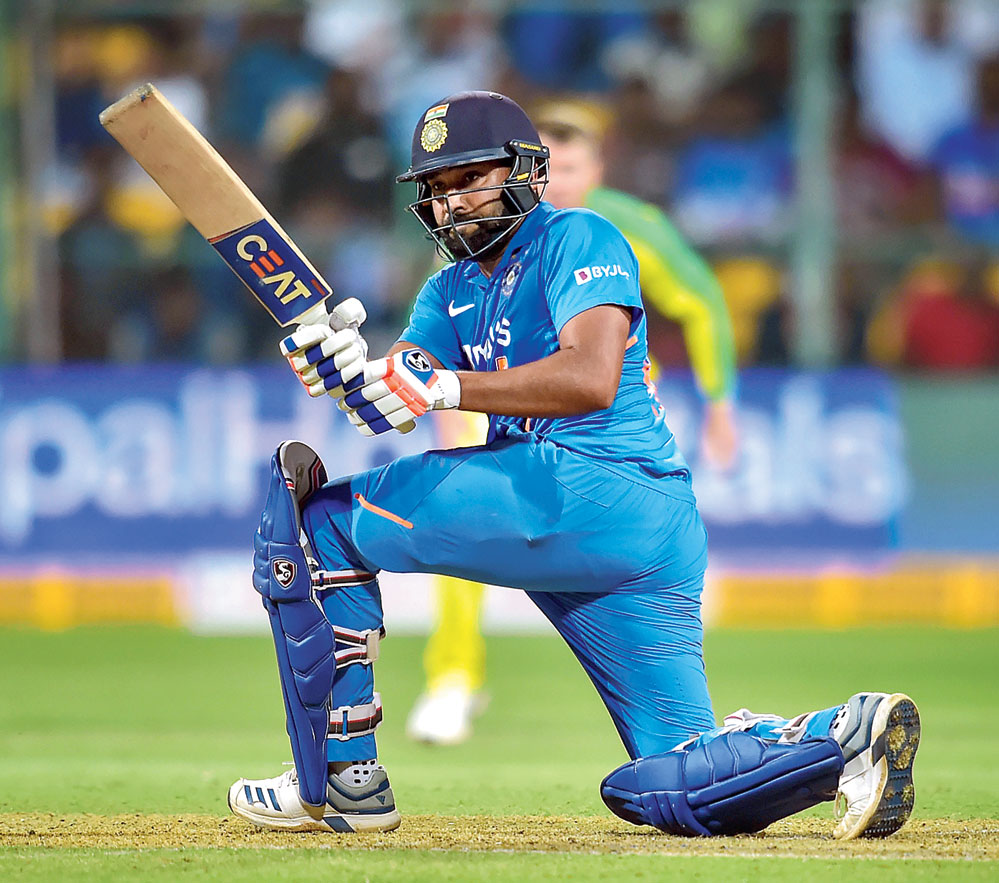 Adam Gilchrist had a personal secret when it came to batting. The prolific Australian wicketkeeper-batsman would start the innings thinking he was 20 or 30 batting already. That would help him feel more relaxed and calm while overcoming that nervous starting period.

Rohit Sharma may not adhere to such philosophies, but he surely brings extra motivation and self-assurance to the crease. He thrives on adversity and the Chinnaswamy was witness to another classic collection from the India vice-captain on Sunday.

Consider this: The Australians set an imposing target of 287 and packed their XI with an intimidating pace attack comprising Pat Cummins, Mitchell Starc and Josh Hazlewood. Shikhar Dhawan had been ruled out after injuring his left shoulder early in the match, which meant India had been restricted to 10 batsmen.

For the third time in as many matches, KL Rahul had a new batting position. Seemingly uncomfortable, he perished early, but Rohit showed why he is regarded as the best in the limited-overs format.

In completing his 29th one-day century in the manner of a wily craftsman, he masterminded another classic seven-wicket victory that fetched India not just the series, but also the belief that seemed to have disappeared during the Wankhede mayhem. As Virat later acknowledged, the 2-1 win will put them in good spirits ahead of the New Zealand tour.

The master of his craft and know-how, Rohit (119 off 128 balls) tore the attack to shreds with sheer domination. None were spared — Cummins, Starc and Hazlewood were tonked over mid-wicket for massive sixes.

The confidence seemed to have rubbed on Virat Kohli as well. Having spent an uncomfortable period against the spin of Ashton Agar and Adam Zampa, he flourished in Rohit’s company, unleashing the trademark cover drives and the pulls.

But it was only after Rohit’s exit following a 137-run association that Virat started to wrest control. Runs came in a hurry, boundaries taken off his pads, cuts dispatched through point.

The India captain finally departed for 89 off 91 balls, but by then, the writing was on the wall. Praise should also be reserved for young Shreyas Iyer who put up an enterprising show during his 44 not out off 35 balls. The Australians had been truly destroyed and in impeccable fashion.

This despite Steve Smith’s heroics that threatened to put India under pressure.

Smith never seemed to be in any hurry and was occasionally troubled by Navdeep Saini, Ravindra Jadeja and Kuldeep Yadav. He picked the gaps with alarming regularity and was not afraid to hook when pitched short.

The resolve to fight adversity and the determination to master every situation always sets him apart, but the way he held the innings together on the day showed his utility to the side. Unfazed after having run the well-set Aaron Finch out, he went about his task in a professional manner. His innings was a convincing performance against an attack that offered probing questions.

His growing ‘bromance’ with Marnus Labuschagne yielded 137 runs for the third wicket which provided the impetus in the mid-stages.

Until Labuschagne fell to a brilliant effort at extra cover by a diving Virat, his conventional technique seemed well suited for the conditions. He made 54 off 64 balls, but to dislodge Smith was proving to be a mammoth task.

But Australia never found the desired momentum. Starc was promoted to use the long handle, but lasted only three balls. Alex Carey’s (35 off 36 balls) unconventional hitting produced a run-a-ball 58-run partnership with Smith, but he miscued a big hit to be caught at cover.

Smith’s first century of the tour came off 117 balls, but it was lack of firepower in the lower order that cost Australia valuable runs. His dismissal in the 48th over threw their plans into disarray as only 13 runs came off the last three overs. Perhaps a certain Glenn Maxwell could have come in handy in such situations.

Much of the credit for restricting Australia in the death overs must go to the pace trio of Shami, Jasprit Bumrah and Saini. With the ball reversing, the batsmen struggled to dig out the yorkers. Bumrah remained the pick of the lot, conceding just one run in the 43rd over.

The day, though, belonged to one Rohit Sharma.