The winning team dominated the second half as a result, edging in front through Sterling’s penalty, a decision that required a lengthy VAR check in the 66th minute 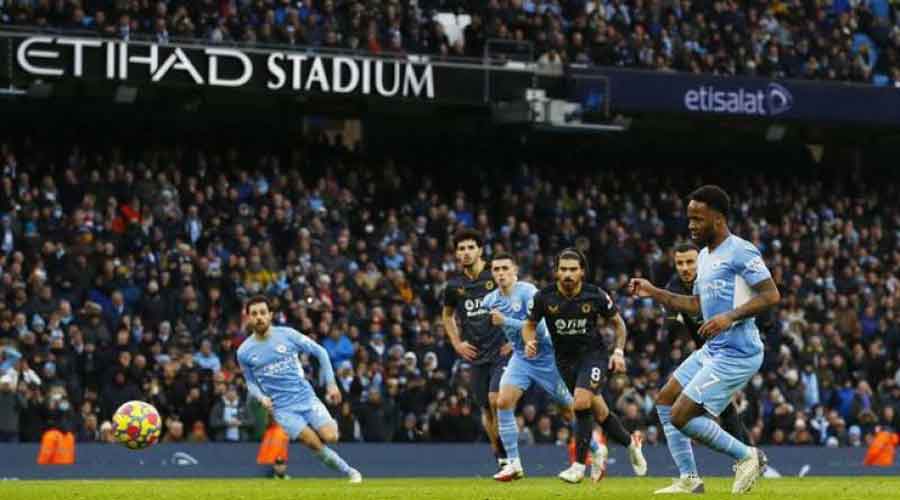 City dominated the second half as a result, edging in front through Sterling’s penalty — a decision that required a lengthy VAR check — in the 66th minute.
The home side had plenty of chances to make the result more comfortable, with Jack Grealish’s struggles since becoming the British record transfer in the close season continuing as he missed from close range.

However, one goal proved enough for City who picked up their sixth successive league win. Wolves, who battled hard as decisions went against them at the Etihad Stadium, stay eighth on 21 from 16 games.

“We were much better when Wolves played with 11 rather than 10 players,” City coach Pep Guardiola said. “It is so difficult to play against a team that don’t want to play or to attack.

“We knew how tough it would be. We were patient all the time. They can punish you on the counter and that has happened in the past against them. In general, we were good but not so clever in the final third.”

The game hinged on one moment of madness. Wolves looked comfortable going into the interval before Jimenez’s needless dismissal gave City the lift they needed.
The Mexico international received his first yellow card for a foul on midfielder Rodri and 31 seconds later got another for blocking Rodri’s free-kick having not retreated enough.

“He knows he cannot do that,” Wolves manager Bruno Lage said. “But the first yellow, he didn’t touch the man and we have 10 men behind the ball. So it is a very hard decision and cost us a lot.”

Referee Jonathan Moss then further ensured he won’t be welcome in Wolverhampton anytime soon after awarding City a penalty for handball against Joao Moutinho.
Sterling slotted the penalty down the middle, becoming the 32nd player to reach 100 Premier League goals.

Chelsea got their Premier League title challenge back on track with a dramatic 3-2 home win over Leeds United on Saturday, settled by an injury-time penalty converted by Jorginho who had earlier scored another spot kick.

The win left Chelsea in third place with 36 points, two off leaders Manchester City and one behind Liverpool after they beat Aston Villa 1-0.
Leeds, who had taken the lead, scored through Raphinha (penalty) and Joe Gelhardt, while Mason Mount got Chelsea’s first goal before Jorginho netted two.
In Liverpool, Steven Gerrard’s return to Anfield as Aston Villa manager ended in a 0-1 defeat by Liverpool with a 67th minute Mohamed Salah penalty giving the Merseysiders victory.

There was little fanfare for Gerrard, the Liverpool-born former captain and Champions League winner, as he took his place in the technical area and from the opening moments it was clear that he had set his side up well to frustrate his old club. But his plans failed when Salah went down in the box under challenge from Tyrone Mings and the resultant penalty sealed the deal.

Arsenal coasted to a 3-0 win over Southampton as boss Mikel Arteta dropped captain Pierre-Emerick Aubameyang from the match-day squad for disciplinary reasons. The victory leaves Arsenal fifth on 26 points, while Southampton are 16th on 16 points.