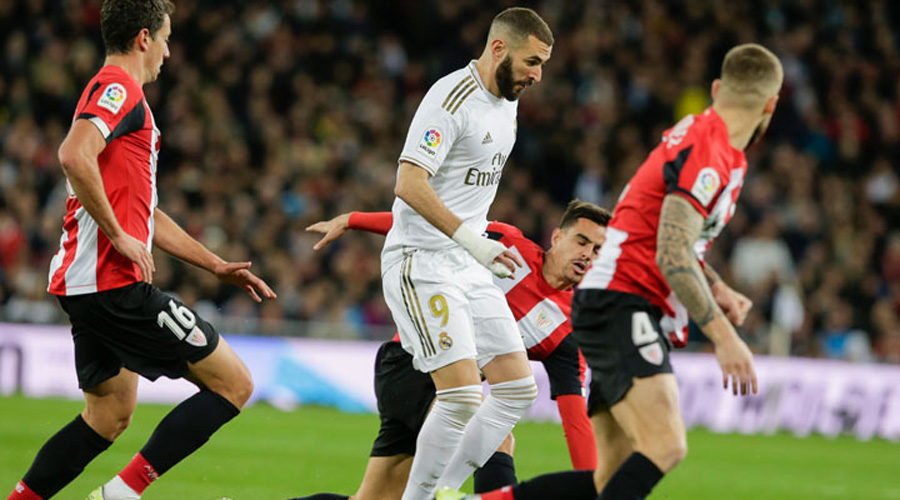 First it was captain Sergio Ramos with a muscle injury. Then Raphael Varane with the coronavirus. Next was Lucas Vazquez with a knee problem.
File picture
AP/PTI   |   Liverpool   |   Published 16.04.21, 03:49 AM

One by one, Real Madrid defenders started going down.

First it was captain Sergio Ramos with a muscle injury. Then Raphael Varane with the coronavirus. Next was Lucas Vazquez with a knee problem.

The outlook was grim for the Spanish powerhouse ahead of the decisive game against Liverpool in the Champions League quarter finals on Wednesday. Real’s depleted defence would have to go up against the English club’s prolific attack to try to protect a 3-1 win from last week’s first leg. It turned out there was no real reason for concern.

It was because of a solid performance by that makeshift defence that Real held on for a 0-0 draw at Anfield and made it back to the Champions League semi-finals after a two-year absence.

“When there are difficulties, they are even more united and want to step up. We have immense quality, but the key is the character of the players.”

Only Ferland Mendy was a regular starter in the Real defence against Liverpool. Substitutes Eder Militao and Nacho Fernandez played superbly in central defence, while midfielder Federico Valverde did well as a right back. And with help of an outstanding performance by goalkeeper Thibaut Courtois and some solid defending by midfielder Casemiro, Real kept in check the dangerous trio of Mohamed Salah, Roberto Firmino and Sadio Mane to reach the European semi-finals for the ninth time in 11 seasons.

Militao and Nacho had already been key for Real in the first leg against Liverpool, when Ramos and Varane also weren’t available. “We are part of the squad and we are here for a reason,” Nacho said.

“We are well-prepared to play games like this. We have played three of the most demanding games together and we have produced top-level performances. So I’m pleased for myself, for Militao and especially for the whole team.”

The duo also thrived in the Spanish league last weekend against Barcelona in the Clasico, which Real won 2-1.

“They showed that they are ready to play for Real Madrid,” Casemiro said.

In the right side of the defence, Valverde held his ground while replacing Vazquez, who had been playing well in the absence of regular starter Dani Carvajal because of a long injury lay-off.

Vazquez got hurt in the first half of the match against Barcelona on Saturday. “Valverde put in a great performance in a position where he’s not used to play,” Zidane said. And when Valverde and the rest of the makeshift defence failed, Courtois was there to keep Real safe. “He is playing brilliantly,” Zidane said.

“It’s so important to have a goalkeeper who is as secure as he is.”