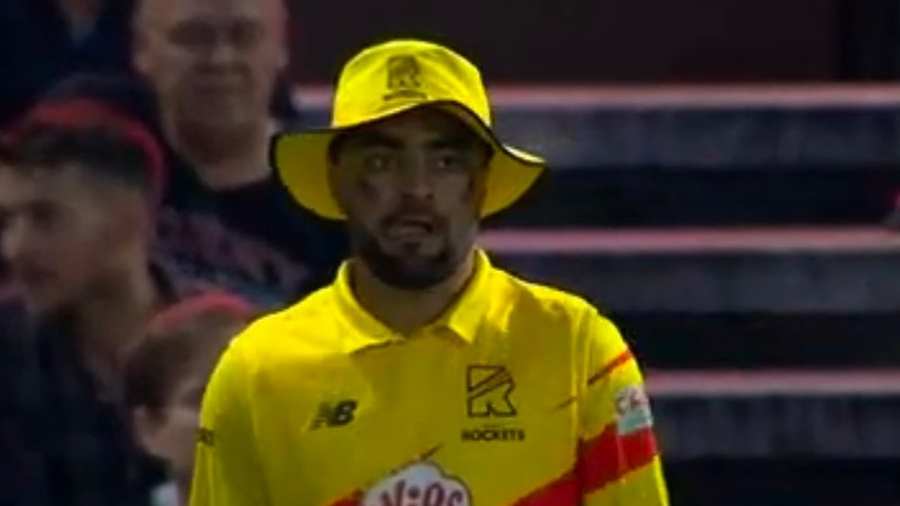 Rashid Khan might have been busy with The Hundred in the UK, but his mind is in Afghanistan.

The leg-spinner, who plays for the Sunrisers Hyderabad in the Indian Premier League, painted the national flag of his country on his face while representing Trent Rockets versus Southern Brave in an eliminator game at The Hundred on Saturday. Ever since the Afghanistan government collapsed and the Taliban took over the country, Rashid has been lending support to his country via social media.

In his most recent tweet on Afghanistan's Independence Day, Rashid said, "Today let us take some time to value our nation and never forget the sacrifices. We hope and pray for the peaceful, developed and United nation INSHALLAH."

Today let us take some time to value our nation and never forget the sacrifices. We hope and pray for the peaceful , developed and United nation INSHALLAH #happyindependenceday

Here's the pic of Rashid panting the Afghanistan flag on his face.

Showing his love and support from 1000’s miles away by painting #Afghanistan’s flag on his face during his last appearance at @thehundred, what an ambassador for

Rashid is getting considerable support from his teammates. In an interview with Sky Sports, Rockets captain Lewis Gregory said, “We have a fantastic group of lads and they have really rallied around him, trying to keep him busy and look after him as much as we can."

Gautam Gambhir recently threw his weight behind the Afghan sensation, saying he has enough in the tank to create an upset at the T20 World Cup. "I have always been a believer that if you want to talk about one team that is going to be a real underdog in this tournament, that must be Afghanistan. Additionally, they have got people like Rashid Khan, Mujeeb, and Mohd Nabi, you can't take them players lightly," he said.