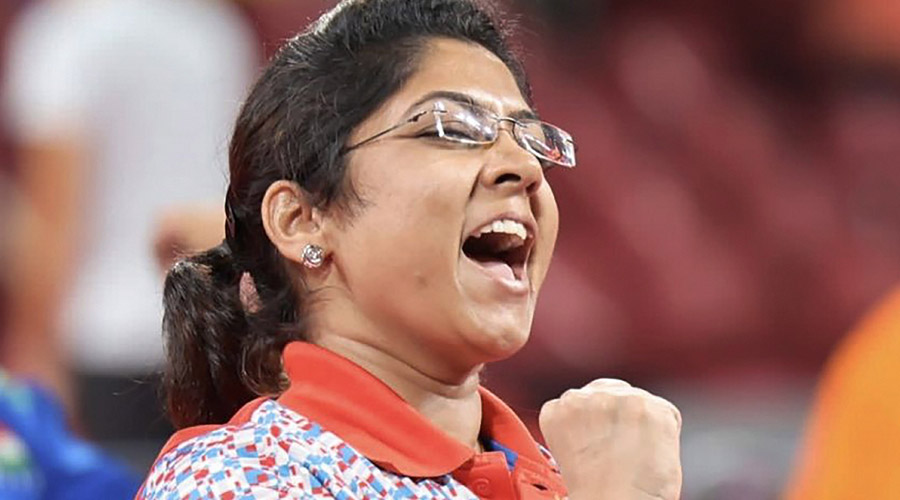 Patel on Sunday became only the second Indian woman to win a medal at the Paralympics after she signed off with a historic silver following a 0-3 loss to world number one Chinese paddler Ying Zhou in the women's singles table tennis class 4 final.

"Bhavina Patel inspires the Indian contingent and sportslovers winning silver at #Paralympics. Your extraordinary determination and skills have brought glory to India. My congratulations to you on this exceptional achievement," President Kovind tweeted.

With this medal, Indian team opened its account at the Games. Prime Minister Modi said Patel's feat is a motivation for youngsters.

"The remarkable Bhavina Patel has scripted history! She brings home a historic Silver medal. Congratulations to her for it. Her life journey is motivating and will also draw more youngsters towards sports. #Paralympics," he tweeted.

Modi also spoke to Patel and congratulated her on the remarkable feat. He also wished her the very best for her future endeavours. Patel hails from Sundhiya village in Vadnagar, Mehsana in Gujarat and Modi told her that he's been to Sundhiya often and enquired if her family is still there.

Bhavina told him that her Parents are still there. Finance Minister Nirmala Sitharaman and Congress leader Rahul Gandhi also took to the social networking site to wish Patel on her success.

"Congratulations #BhavinaPatel on winning the Silver medal in #ParaTableTennis. Your perseverance and success shall shall as motivation for many," Sitharaman wrote on her handle.

"Fantastic performance by @BhavinaPatel6 to bag a silver and open India's account in the #Tokyo2020 @Paralympics. Wonderful show of skill and mental resilience. Extremely proud! #Praise4Para," he tweeted alongwith a letter.

Fantastic performance by @BhavinaPatel6 to bag a silver and open India's account in the #Tokyo2020 @Paralympics. Wonderful show of skill and mental resilience. Extremely proud! #Praise4Para

Deepa Malik, who is the current president of Paralympic Committee of India (PCI), was the first Indian woman to win a medal in the Paralympic Games when she had claimed a silver in shotput at Rio five years back.

"Her game, skill, patience, her coming back, the way she has kept her focus, it is beyond words, it is world class.

"This is the skill and calmness that has made her achieve the feat of silver at Paralympics and our silver girl has given this gift to the nation on national sports day, which is the most apt day to create history for any sports person."

Malik said Patel has shattered the taboos around disability.

"On a personal level, I feel it is a passing on the baton. I always wanted women participation to come forward..so that we can create inclusively, shatter this stereotype and taboo around disability and Bhavina has just done that."

What a wonderful news for all of

on #NationalSportsDay. Congratulations on the silver medal @BhavinaPatel6. This is a historic achievement!

Every medal we win will inspire millions into the sport, & sow the seeds for more medals in future. Good start for us at #Paralympics . pic.twitter.com/4f0pz0hKuc

Laxman tweeted: "Silver medal for India. Many Congratulations to #BhavinaPatel who has created history by becoming the first Indian para-paddler to win a medal in #Paralympics history."