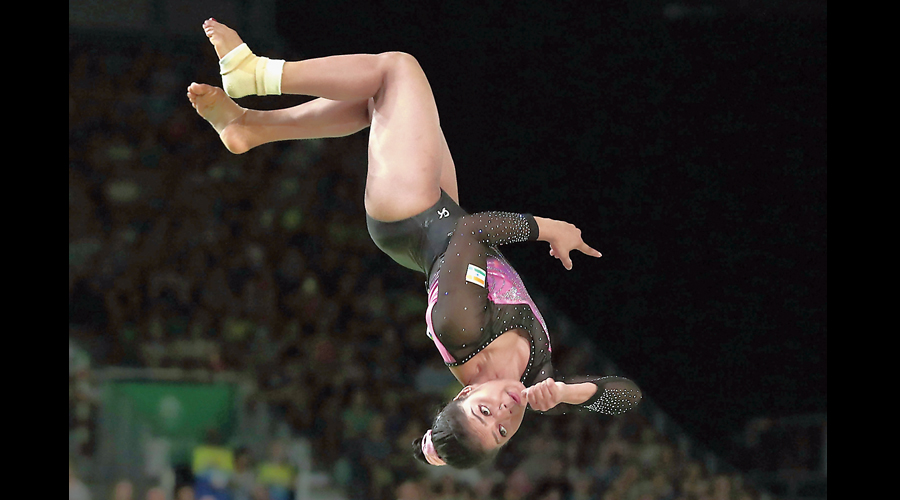 The name Pranati Nayak might not ring a bell just yet, but she plans to address that soon. India’s only qualifier in gymnastics for the upcoming Olympics aims to return from Tokyo with a name for herself.

And for that, she looks up to Dipa Karmakar, the Indian gymnast who vaulted into our conscience with her gallant performance at the last Olympics, in Rio, Brazil.

“Look, the Olympics is a big stage where all the best in the world gather. But I too have been giving my heart and soul into my practice for the past 16-17 years. Now is the time for me to deliver,” Pranati told The Telegraph.

“I intend to come back from Tokyo with a name for myself, the same way that Dipa di did. Yes, Dipa di is my idol. She spoke to me after I made the cut. We are good friends and she guides me too,” said the 26-year-old.

With several tournaments cancelled — including the Asian meet, which was scheduled to be held from May 29 in Hangzhou (China) — qualification for the Olympics came down to Pranati’s results at the last World Championship.

Pranati, who won bronze in the vault at the Asian Championships in March 2019, made the cut through the continental quota.

It was her mother who had triggered interest in gymnastics in little Pranati. “Ma was proficient in yoga. She would do the chakrasana (arch) so well and I would try to copy her. That is where it all began.”

When she was eight, her father Sumanta, who used to drive a bus for a living, took her to SAI, Eastern Centre. “I was initially homesick. But gradually Minara Begum, who was then the coach, took me under her wings and became a second mother to me,” Pranati, who now holds a job with the railways, said.

Since then, the SAI Eastern Centre has been her second home and currently she has been training there for the last 10 and odd days.

“After her Olympics qualification, SAI, presently under lockdown, gave her special permission to train on its premises,” said Pranati’s current coach, Lakhan Manohar Sharma. “There are 11 of us there now, including her physio, masseur and other support staff. We are inside a secure bubble. We are not allowed to come out of SAI, nor are others allowed in. This system is suiting us just fine.”

Last year, post-lockdown, Pranati, from Midnapore, trained at home for 3-4 months with online support and guidance of Sharma but realised that such a set-up would not be enough for preparation.

“So, she moved into a rented apartment in Calcutta and we tapped the many small clubs in and around the city where she started to train full on,” said coach Sharma.

Next stop Tokyo as Pranati chases a dream. Or maybe a name.