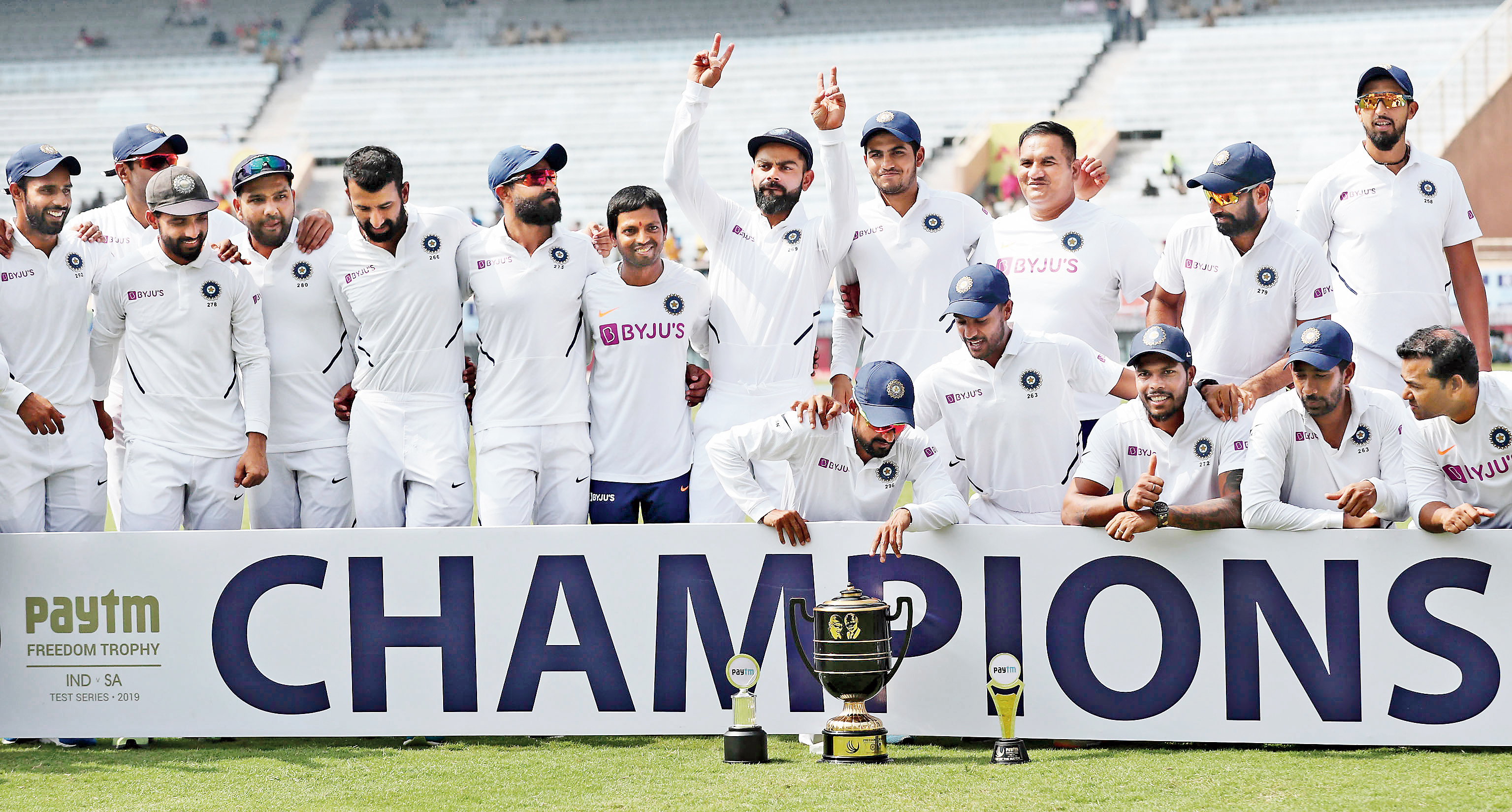 Just two overs and 10 minutes on Tuesday were all that India needed to complete a 3-0 series sweep, winning the third and final Test at the JSCA International Stadium by an innings and 202 runs inside four days.

Captain Virat Kohli termed it a “perfect series win” as this turned out to be India’s biggest-ever Test victory against South Africa, bettering their own record they registered in Pune.

The occasion couldn’t have got any better for Kohli and his teammates as they wrapped things up in the presence of Mahendra Singh Dhoni, who later met and wished the players in the dressing room.

“All the three matches have been excellent for us. It was a fabulous show and it’s very rarely seen that whoever is getting a chance is performing well.

“We are very happy to have created a culture where the players do not think of individual performances and rather look to perform for the team. You play under pressure if you think of your own performance, but when you think for the team, it always turns out to be a collective show.

“The bowlers have been simply outstanding. We didn’t see situations like one bowler taking eight wickets and the others not getting any. Whoever came to bowl looked to get wickets in every spell of his. The biggest satisfaction for us is that we are playing superb cricket as a team,” Kohli said during the media interaction.

Comfortably placed at the top of the ICC World Test Championship standings, India soar to 240 points from five matches, while South Africa remain on nought. What pleases Kohli the most is his team’s balanced performance in the series. “I would say this is on par with the most balanced performances we have had in the past.

“As a team, you can’t ask for anything more — batsmen getting runs, spinners and fast bowlers getting wickets, (Wriddhiman) Saha coming back and keeping the way he does.We have also applied a lot of pressure on the opposition in our conditions… I don’t think we allowed the opposition to get into the game at any point of the series,” Kohli emphasised.

For local lad Shahbaz Nadeem, his debut Test ended on an even better note as he scalped the remaining two South African wickets off consecutive balls to ensure victory and will be on a hat-trick the next time he plays a Test.

“I’ve played U-19 cricket with Nadeem. I knew he was a very skilful and conventional left-arm spinner. He gives a lot of revolutions on the ball, has good pace and keeps a good seam position. It’s been a great start for him and he bowled with a lot of composure… See how things turn in life. Two days before the Test, he was in Calcutta and he was called up suddenly, made his debut and did well… I feel he will build his career from hereon,” Kohli added.

“If the quicks believe they can make something happen even if there’s nothing in the pitch, they really can make it happen… They want challenges and are always keen to overcome them. Even if the ball is doing little or nothing, they ask for it. They want to make an impact and give the team breakthroughs. It’s all about a positive mindset.”

Kohli lavished praise on Player of the Series Rohit Sharma for overcoming his anxiety and hesitation to open in Tests, and putting in match-winning performances.

“There was always an apprehension about how Rohit would perform as an opener in Test cricket. To overcome that phase and to bat the way he has done in the series has been magnificent. Despite missing out on some game time here because of rain, his pace in scoring runs gave us so much time to bowl South Africa out twice. Credit solely goes to him for the way he overcame his anxiety and hesitation,” Kohli said.