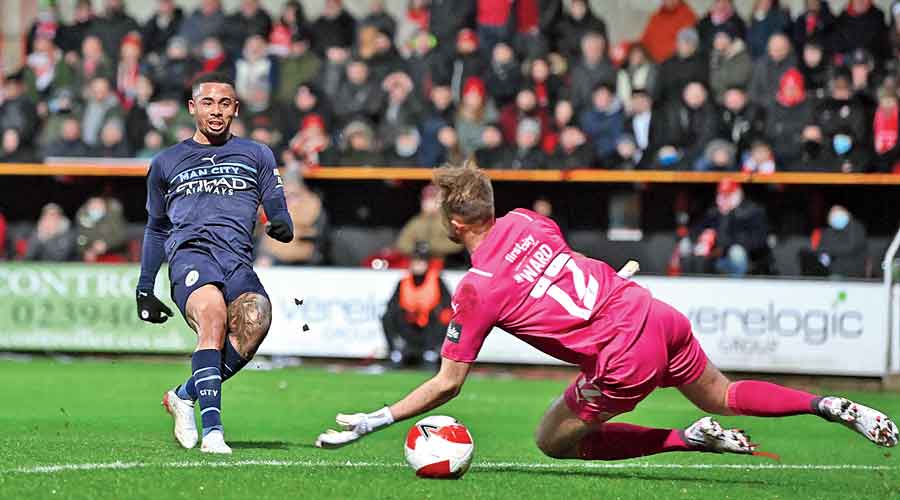 Newcastle United suffered a humiliating 0-1 home defeat by third-tier Cambridge United but holders Leicester City began their defence of the FA Cup by trouncing Premier League rivals Watford 4-1 in the third round on Saturday.

Premier League strugglers Newcastle flexed their new financial muscle by signing England full back Kieran Trippier from Atletico Madrid on Friday and he made his debut in front of an expectant St James’ Park crowd.

But humble Cambridge were undaunted as Joe Ironside fired in a second-half goal and goalkeeper Dimitar Mitov made a series of saves to seal a famous victory and send their 5,000 visiting fans into delirium.

Leicester welcomed back former title-winning manager Claudio Ranieri but showed him no sympathy in a dominant display interrupted only by a floodlight failure.

Youri Tielemans put them ahead from the penalty spot and James Maddison made it 2-0. Joao Pedro replied for Watford but second-half goals by Harvey Barnes and Marc Albrighton sealed Leicester’s place in the fourth round.

Premier League leaders Manchester City made light work of fourth-tier Swindon Town in a 4-1 away victory on Friday.

A full house at the County Ground had their hopes of a famous upset crushed inside the opening half hour as a strong City side struck twice through Bernardo Silva and Gabriel Jesus.

Swindon, who have fallen on hard times since a brief membership of the Premier League in 1993-94, stuck to their guns throughout but were ultimately outclassed by City’s slickers.

City took the lead when impressive teenager Cole Palmer crossed for Silva to tap home and were gifted a second in the 28th minute when Jesus converted from Kevin De Bruyne’s pass after Swindon were ruthlessly punished for trying to play out from the back.

Manchester United midfielder Paul Pogba is unlikely to return to full training for another month as he continues his recovery from a groin injury, interim manager Ralf Rangnick said ahead of Monday’s FA Cup third-round clash at home to Aston Villa.

The 28-year-old, who was injured on international duty with France in November, spent a few weeks in Dubai for rehabilitation before returning to England last month.

“As far as I know, I was told a week ago, it would be a minimum of at least another four or five weeks before he is fit for training again,” Rangnick told the club website on Saturday.

“It’s one thing to be training fit but, on the other hand, he needs to be fit for the match and competition in either the Premier League or the Champions League and this will still take some time.”