Advertisement
Home / Sports / If not the king, ever the kingmaker

If not the king, ever the kingmaker 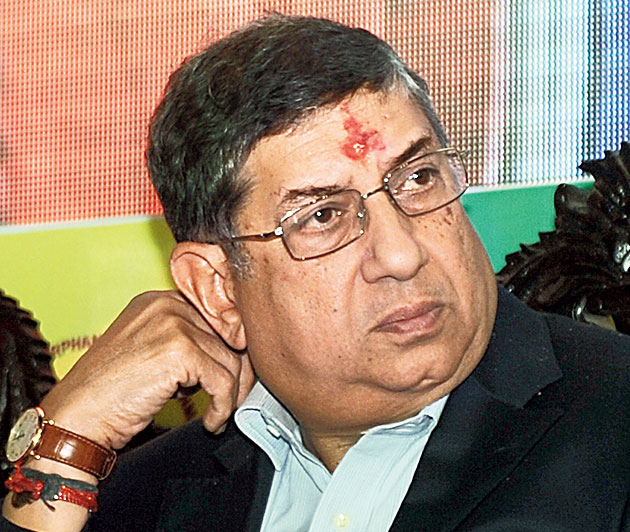 Mahendra Singh Dhoni isn’t known to speak his mind. More so if it’s about N. Srinivasan, Indian cricket’s messiah and widely considered his mentor off the field.

But on that balmy evening in Chennai last year, at the launch of a coffee-table book on Srinivasan, Dhoni revealed what most of Indian cricket’s leading voices always believed. “You can love him, you can hate him, but you can’t ignore him,” Dhoni had said before mentioning how Srinivasan had helped him understand life, deal with failures and never give up.

The 74-year-old former BCCI president and ICC chairman, former owner of IPL franchise Chennai Super Kings, managing director and vice-chairman of India Cements, employer of top cricketers, and a keen golfer, though his activities on the greens have been restricted of late because of a cataract problem, Srinivasan remains an enigma.

Mario Puzo’s The Godfather is his favourite novel and he remains the godfather in the Indian cricket administration.

As the BCCI elections draw near, the first since 2015, all indications are that Srinivasan’s influence in his fief hasn’t diminished in spite of having to step down as board chief in 2014 following the IPL spot-fixing scandal which implicated his son-in-law Gurunath Meiyappan.

His differences with the Supreme Court-appointed Committee of Administrators chief Vinod Rai is well documented and the non-compliance sword hangs over the Tamil Nadu Cricket Association (TNCA) — the jury’s out on whether it could be deprived of voting rights at the BCCI’s annual general meeting on October 23.

The age cap of 70 years on holding any BCCI post imposed by the Justice Rajendra Mal Lodha Committee may have dented his ambitions. But he has maintained his vice-like grip on the sport.

His daughter Rupa Gurunath has been elected TNCA president; children of several regional satraps close to Srinivasan who have also been barred from fighting the polls are holding the reins in their respective state units.

But it’s not just about winning elections but more about his love for the game, says his trusted lieutenant Kasi Viswanathan.

“At one point in time, most of the Tamil Nadu players were employees of India Cements. Cricket is part of India Cements’ culture,” he told The Telegraph. “S. Venkataraghavan was among the first cricketers employed by India Cements. We’ve been promoting cricket even in other states.”

The lessons learnt from working at India Cements, a company co-founded by his father, T.S. Narayanaswami, probably taught him never to accept defeat. He was once forced out from the company but fought his way back to be reinstated as the MD. It had taught him the virtues of perseverance and the will to fight.

Srinivasan was the secretary of the BCCI before becoming its president, taking over from Shashank Manohar in 2011. He was succeeded by Jagmohan Dalmiya in 2014 following the spot-fixing scandal.

“The impact was felt when Srinivasan headed the BCCI. There were benevolent and pension schemes which helped the players… Not just the players, even the match officials were given their due,” recalled Kasi.

“The BCCI even helped (former India spinner) Subhash Gupte’s wife in the West Indies, who we traced after a lot of difficulty. That came as a big relief to her. Raman Lamba’s wife also benefited from such a scheme during her illness.” Lamba, a former India batsman, died after being hit on the head while fielding in a Bangladesh league cricket match in 1998.

Today an average Ranji Trophy player earns at least around Rs 10 lakh a year, a result of Srinivasan’s initiative. India cricketers had to wait for months to get their payment before Srinivasan became the treasurer in 2005.

Perhaps all these had prompted Kapil Dev to once lament: “I met Mr Srinivasan 20 years back or maybe little more. I had almost finished my career… why did you come so late?”

As the ICC chairman, Srinivasan developed the Big Three Model — conceived along with Cricket Australia and England and Wales Cricket Board. Srinivasan believed that India had every right to ask for its share as 75 per cent of the revenue is generated by BCCI. According to the financial model, BCCI would have received around $570 million. But soon after he stepped aside, successor Shashank Manohar went on to restructure the ICC, and the Big Three model was abolished. Under the current policy, BCCI earnings from ICC is around $293 million.

“Srinivasan is a mass leader. After Dalmiya, he has been the most influential and dominating sports administrator in the BCCI or ICC. Be it winning votes or being involved in a legal battle he’s always there to lead from the front,” says former Cricket Association of Bengal joint secretary Biswarup Dey, who has observed both Dalmiya and Srinivasan from close quarters.

“Srinivasan still retains the same aura because no one can form a team now. For Srinivasan it’s all about team work,” added Dey.

What keeps Srinivasan going? “Que Será, Será (Whatever will be, will be),” are his favourite words.

His close aides say that he always tells them, “if you believe you are right, don’t give up. You will eventually win.” That has been the motto of his career. Perhaps that will drive him this time too.