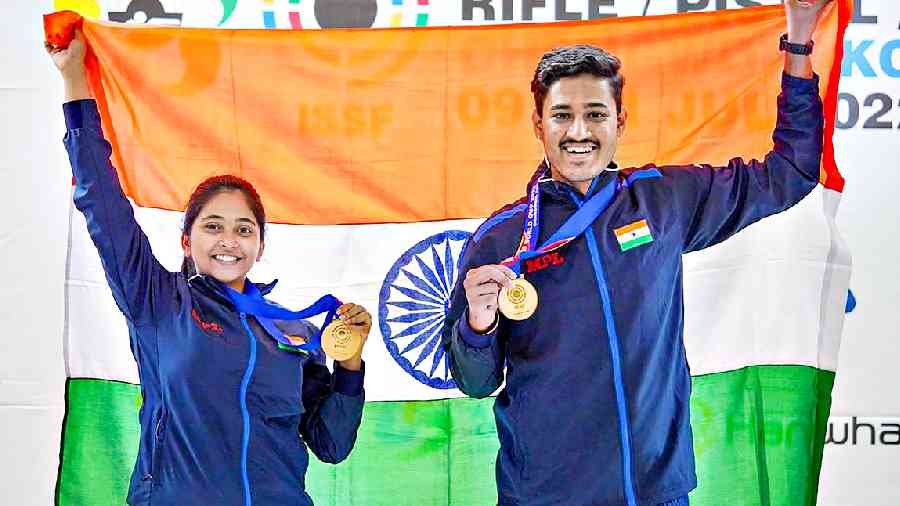 The Shooting World Cup done and dusted, Bengal’s Mehuli Ghosh has set her eyes on the World Championship to be held in less than three months.

She teamed up with Ramita and Elavenil Valarivan to win a silver in the women’s team event.

The ISSF World Championship to be held in Cairo from October 12 to 25 is the first meet where quota places for the 2024 Olympic Games in Paris will be up for grabs.

Mehuli wants to ensure a quota berth in Cairo itself. “Changwon is over. The success there gives me confidence but now my focus is on the World Championship. I have to do well,” Mehuli told The Telegraph from Hyderabad on Thursday.

Medals in the mixed and team event are commendable but what Mehuli now needs is some solid performance in the 10-metre rifle individual event.

In Changwon, she missed the qualification mark by a whisker. In fact, none of the Indian shooters could qualify for the final round in that event and Mehuli’s score of 628.7 was the best amongst her compatriots.

She is capable of doing well and the two medals should give her the confidence to raise the bar. “I would not say I fared badly in the individual event but yes I need to do more,” she agreed.

Joydeep Karmakar, her one-time coach and mentor, said Mehuli is getting back into rhythm. “She is peaking at the right time, I would say. The focus now should be on the individual event since that earns you an Olympic quota,” Karmakar, who is also India’s rifle 50-metre coach, said from New Delhi.

Mehuli, according to Karmakar, hasn’t yet reached the level she used to be three years ago. “She hasn’t yet but is on the right track. I am confident soon we will see the Mehuli of yore,” he said. Mehuli, however, would like to put it in a different way. “I would say the two phases are different.”

“It’s been a conscious decision to shift base. Bibaswan Sir is a senior coach in the academy and Gagan Sir is also there to mentor me. I did not have to think twice.

“The facilities are world class and I can only improve by staying here. I can practise for more hours and have also started shooting in 50m air rifle,” she said.

“There are only positives to talk about. My parents (Nemai and Mitali) also deserve a lot of credit for their support. It’s not easy to stay away from your daughter.”  Mehuli could not qualify for the Tokyo Olympic Games and a podium finish in Paris is now her bigger objective. “Yes, like every athlete, an Olympic medal is my goal and dream.

But I am taking one tournament at a time. Cairo in October is the first step,” Mehuli, who last won a gold in the SAF Games in 2019, said.