High-fiving the ‘hand of god’ 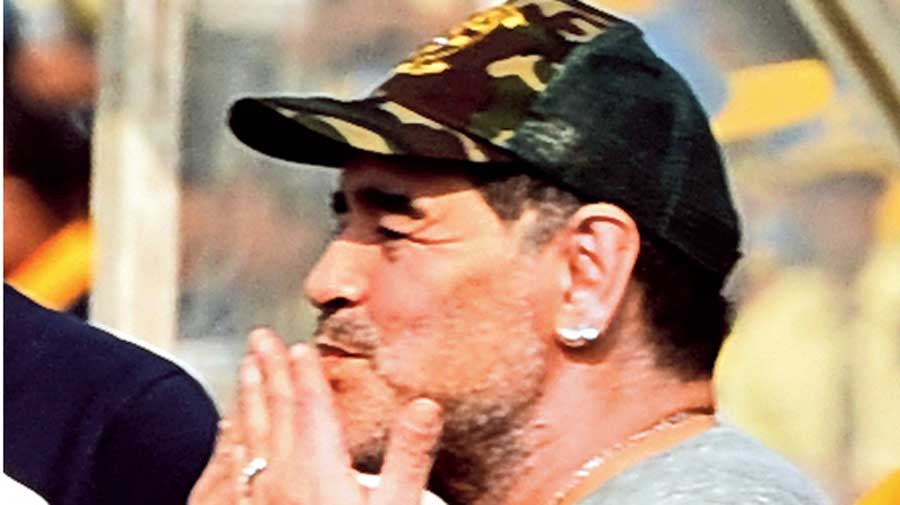 2020 probably hit me the hardest when my phone beeped with the news update that Diego Maradona is no more. I suddenly felt a strange hollowness in my heart. It’s like the death of an emotion that I held on to too tightly since the age of six. It seems the reason behind my love for football is no longer there.

One of the very few memories that keeps coming to my mind from that tender age is of watching the 1990 World Cup with my father and that was the time when unknowingly I fell in love with Maradona, Argentina and football. I wept heavily after the final and it was such a heartbreak that I used to play with a football on my own imagining Maradona playing for Argentina and scoring goals after goals against West Germany. I had developed a strange prejudice against Germany since then and that only got boosted when they came in the way of Argentina’s Cup glory again and again.

Diego Maradona at the Aditya School of Sports Stadium in 2017.
B. Halder
Advertisement

I was desperate to see Maradona lift another World Cup as I had missed the 1986 one. In 1994 when people started saying that he had lost the touch, I was confident of watching the magic again. And the magic happened in the group league match against Greece when his left-footed strike stretched the back of the net. It’s considered one of his best World Cup goals. I was elated as my long wait of watching him score had ended but little did I know then that it would be his last goal for Argentina and another heartbreak was waiting for me. He left the game but the madness for the game and a longing for witnessing another World Cup win by Argentina had crept into me by then.

The emotion was so strong even 12 years later that I didn’t think twice while putting the image of Maradona kissing the 1986 World Cup as the profile picture of my first personal mail account and I never felt like changing it.

However, my disappointment at not watching him lift the 1986 Cup was somehow compensated by an incident three years ago that I had never imagined would happen in my life. It was December 12, 2017, and it remains the most memorable day in my journalistic career till date.

I couldn’t believe my luck when I got to cover an event in Barasat where the legend came on his last visit to Calcutta. I felt goosebumps the whole night before the event. It was the inauguration of Aditya School of Sports Stadium on Aditya Academy’s Barasat campus and Maradona held a small workshop, too, engaging 50-odd aspiring footballers from the school.

The moment he entered the school, I had realised I got back the madness that was there in my childhood while watching him play. Like hundreds of students I became restless to catch a glimpse of him. He entered the ground waving at the gallery and blowing kisses to the students present there. It was an electrifying atmosphere as the gallery, brimming with students, teachers and parents, chanted “Diego Diego” all the while. He kept on joking and smiling while interacting with the kids and obliged them by posing for selfies and group photos.
However, he was all serious as soon as he started the workshop. He made all the boys stand in queues and tested their ability to receive and shoot the ball. He applauded the boys for their good efforts and he shouted at them while correcting their techniques. I witnessed a genius at work. I was awestruck to see him dribbling past the teenagers and shooting at the goal with equal precision even at the age of 57. After the 45-minute workshop, he kicked all the balls to the gallery with his divine left foot and that too in style. He was pointing out a section in the gallery where he wanted to send the ball and then kicked the ball as if challenging himself for accuracy. It seemed a magician was showcasing his tricks one after another and everyone was spellbound.

Then came the moment that I would cherish the rest of my life though it was sheer madness. I suddenly noticed some students rushing towards the opposite side of the ground from where Maradona would probably make an exit. I couldn’t resist myself and left the enclosure marked for the journalists. I sprinted along with the kids and when I reached the exit area, the God of football was there. He was high-fiving with the students with a smiling face. I put forward my right hand and the “Hand of God” touched it. My life was made!