Ilkay Gundogan scored twice in a 4-1 victory at Liverpool, for whom ’keeper Alisson endured a Sunday afternoon to forget 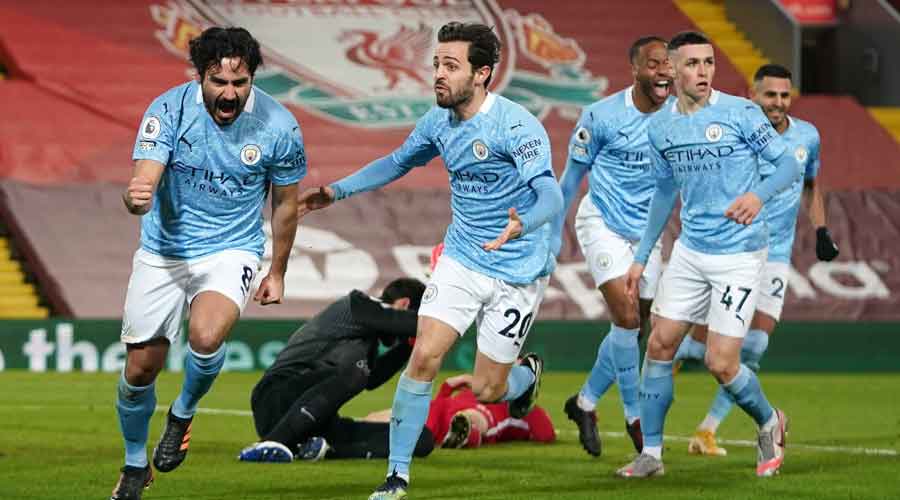 Gundogan missed a first-half penalty but made up for that by firing City ahead four minutes after the break only for Mohamed Salah to equalise from the spot just past the hour mark, Liverpool’s first goal at home this year
(twitter.com/IlkayGuendogan)
Agencies   |   Liverpool   |   Published 08.02.21, 02:29 AM

Manchester City opened up a commanding five-point lead at the top of the Premier League as Ilkay Gundogan scored twice in a 4-1 victory at Liverpool, for whom ’keeper Alisson endured a Sunday afternoon to forget.

An emphatic win, City’s 10th in a row in the league and first at Anfield since 2003, moved Pep Guardiola’s side to 50 points from 22 games, five more than second-placed Manchester United who have played a game more.

Gundogan missed a first-half penalty but made up for that by firing City ahead four minutes after the break only for Mohamed Salah to equalise from the spot just past the hour mark, Liverpool’s first goal at home this year.

City then had a John Stones goal ruled out before they were gifted two goals in three minutes by Alisson.

First he passed straight to Phil Foden who showed great composure to set up Gundogan to restore City’s lead, then Raheem Sterling made it 3-1 after another dreadful error by Alisson.

It got even worse for champions Liverpool as the excellent Foden added a superb fourth goal in the 83rd minute.

Fourth-placed Liverpool are now 10 points behind City and their title defence is in tatters.

Harry Kane scored on his return from injury to help Tottenham Hotspur to a 2-0 victory over West Bromwich Albion and end a three-match losing run.

The England skipper’s return after missing the last two games with an ankle injury was sooner than expected and Tottenham’s talisman was quickly back in the groove.

After missing a couple of chances in the first-half, Kane struck in the 54th minute to move joint second on Tottenham’s all-time scoring list alongside Bobby Smith with 208 goals.

Kane and Son have both scored 13 league goals this season and again showed how invaluable they are to Tottenham.

When Kane had to be substituted at halftime in the defeat by Liverpool, there were fears the striker might be facing a longer spell on the sidelines and the Spurs gloom deepened with a toothless loss to Chelsea in midweek.

But his return proved a huge boost as Tottenham produced a dominant display, albeit against struggling opposition, to revive their challenge for the top four.

In another match, Wolverhampton Wanderers and Leicester City shared the spoils in a 0-0 draw.

Manchester United manager Ole Gunnar Solskjaer said his side cannot be considered title contenders after they twice blew a lead to draw 3-3 with Everton at Old Trafford on Saturday.

Goals from Edinson Cavani and Bruno Fernandes put United ahead, but sloppy defending allowed the visitors to get back on level terms through Abdoulaye Doucoure and James Rodriguez.

Scott McTominay fired Solskjaer’s side into the lead in the 70th minute but they were stunned in stoppage time as Everton snatched a draw with the last kick of the game from Dominic Calvert-Lewin.

“We shouldn’t even be considered as title-chasers,” Solskjaer, who had his 100th Premier League game in charge, said.

“We’ve got to be better as a team and let’s see where we end up. Going forward, we need to stop conceding easy goals.”