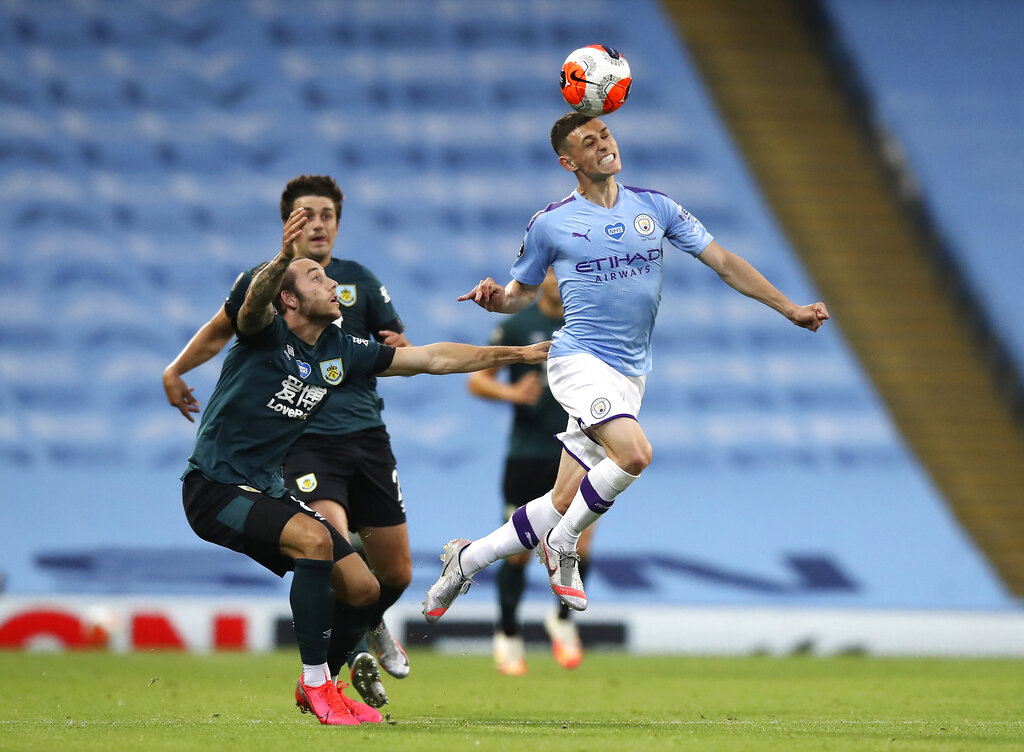 Manchester City’s Phil Foden heads the ball away from Josh Brownhill of Burnley during their Premier League match at the Etihad Stadium on Monday.
(AP)
Reuters   |   Manchester   |   Published 24.06.20, 01:05 AM

Sergio Aguero gave Manchester City a big injury worry by hobbling off with a right knee problem during the 5-0 win over Burnley on Monday.

“We will see... He felt something in his knee. He was struggling in the last month about some pain in his knee.”

The Argentina striker already appeared in discomfort after having a blocked shot midway through the first half, when he was fouled by Burnley defender Ben Mee in the area in stoppage time to earn a penalty on Monday.

Aguero stayed down, clutching his knee, and soon left the field. “The striker will now travel to Barcelona to see Dr Ramon Cugat for further examination,” the club said.

Any lengthy absence would leave City with just one recognised striker, Gabriel Jesus, as the team works to negotiate its way through a hectic schedule since the resumption of soccer after the coronavirus outbreak.

City has eight more league games to play before July 26 and is also in the FA Cup, which resumes at the quarter final stage next weekend. They are also still involved in the Champions League, which will restart in August.

In Monday’s game, Phil Foden and Riyad Mahrez scored two goals apiece as the hosts showed their impressive strength in depth, making eight changes but still crushing a woeful Burnley. David Silva too was on target.

Guardiola was all praise for the 20-year-old Foden, who looks good to replace Silva, who is due to leave City at the end of this campaign.

Cristiano Ronaldo converted a first-half penalty as leaders Juventus resumed their Serie A campaign with a 2-0 win at Bologna on Monday, lifting some of the pressure off coach Maurizio Sarri.

After missing a spot-kick in a Coppa Italia match against AC Milan 10 days ago, Ronaldo made no mistake in the 23rd minute and Paulo Dybala curled in a brilliant second before half-time to give the Turin side a comfortable win.

Juventus, with 66 points and chasing a ninth successive title, extended their lead to four points over Lazio.