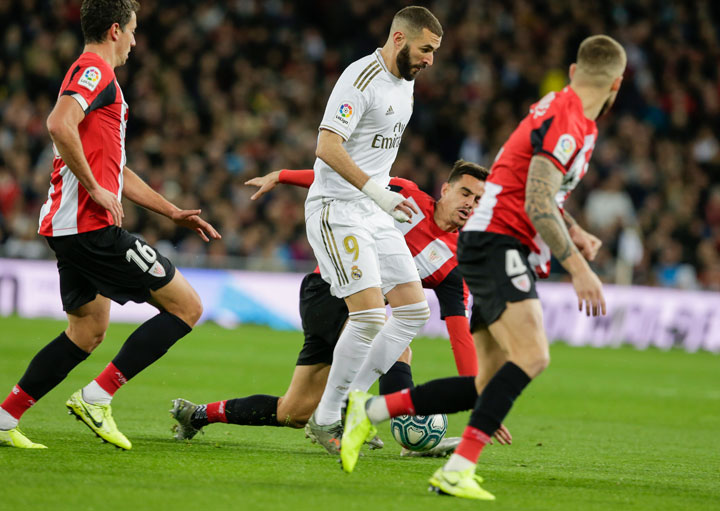 By goalkeeper Thibaut Courtois’s own admission, Real Madrid go into Christmas break with a bitter taste in the mouth.

On Sunday at the Bernabeu, Madrid hit the woodwork three times but could only draw 0-0 at home to Athletic Bilbao in a frustrating final game of 2019. The result meant they slipped two points behind La Liga leaders Barcelona. They have 37 points after 18 games, while Barcelona have 39.

It was Madrid’s third draw in a row after 1-1 and 0-0 stalemates away to Valencia and Barcelona respectively, games in which they also played well but lacked composure in front of goal.

“I feel bad for the players because of the effort they put in. We are annoyed that we couldn’t score with all the chances we had,” Madrid coach Zinedine Zidane told reporters.

“The ball isn’t going in for us at the moment but there’s no need to be pessimistic. We have to remember this has been a good season for us. We’ve had a little bit of a sour ending to the year but we can’t wait for 2020 to start.”

Yet, it is clear that Madrid have still not replaced Cristiano Ronaldo, and the pain they suffered in the first season without the Portuguese icon has flowed over into the second.

In the last three matches, Madrid have registered 18 shots on target but have scored just a solitary goal against Valencia at the Mestalla. That too in the last second of the match and Courtois had to go to the rival penalty box to boost the attack.

“We are left with a bad taste because we hit the woodwork three times and had some other opportunities, so it’s a real shame that we couldn’t pick up three points,” Courtois said.

There isn’t a player who sums up Madrid’s current problems better than Vinicius Jr. The Brazilian is doing absolutely everything correctly right up until the final moment.

His wayward shooting took him to No. 1 in the worldwide trend list on social media after Sunday’s match.

Now sample this. After trying everything to score against Barcelona, Sergio Ramos even ended up playing up front at times on Sunday, but a grand total of 37 crosses into the box found a Madrid player on just seven occasions.

Against Athletic Bilbao, Madrid’s top scorer Karim Benzema had a shot cleared off the line in a lively first half while Toni Kroos came within inches of scoring when he waltzed through the defence and hammered a shot which Athletic keeper Unai Simon deflected on to the bar.

Substitute Nacho Fernandez rattled the bar in the second half while Serbian forward Luka Jovic left Simon flat-footed with a late header but watched as the ball bounced off the post and Sergio Ramos scuffed the rebound back at the goalkeeper.

Bayern Munich have plenty to be pleased about going into the Bundesliga’s four-week winter break with interim boss Hansi Flick having been rewarded for eight wins in 10 games by being kept on “at least” until the end of the season.

In Milan, there will be mixed emotions this Christmas for the fans of Inter and AC Milan. While Inter sit top of the table and eye their first Serie A crown in a decade after a 4-0 rout of Genoa on Saturday, for their rivals the new year cannot come soon enough.

Milan are down in 11th spot after suffering a 0-5 demolition at the hands of Atalanta on Sunday.

Kylian Mbappe illustrated his star quality both on and off the pitch on Saturday as PSG kept up their stroll towards the Ligue 1 title with a 4-1 win over Amiens.

A day after his 21st birthday, Mbappe scored either side of Neymar’s effort before Mauro Icardi added a late fourth.

Mbappe finishes the year with 41 goals and at least one more admirer in his fan club after he consoled a young boy who evaded security to run on the pitch to grab an autograph from the star striker.

The youngster was in tears by the time he reached the player after being pursued by security staff.