Jorginho converted the decisive penalty kick to give the Azzurri a 4-2 shootout win over La Roja. 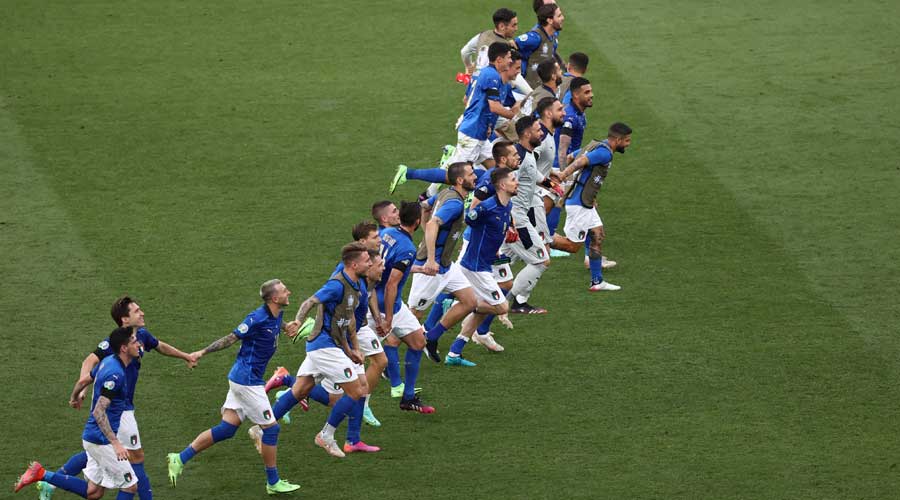 Italy's unbeaten run has now been extended to 33 games as Roberto Mancini's side marched into the Euro 2020 final beating Spain on penalties in the semi-final.

Jorginho converted the decisive penalty kick to give the Azzurri a 4-2 shootout win over La Roja. The midfielder took a trademark hop at the end of his run-up before rolling the ball into the bottom corner.

The match had finished 1-1 through extra time. Federico Chiesa scored for Italy with a curling shot in the 60th minute but Alvaro Morata equalised for Luis Enrique's side in the 80th. Morata missed the next-to-last kick in the shootout, giving Jorginho the chance to win it. Italy will be back at Wembley Stadium for the final on Sunday against either England or Denmark.

Here's a video on the highlights of the game:

"We are pleased to have given joy like this to the Italian people. We knew it would be very hard, Spain caused us plenty of trouble. We tried to score when we had the chances but we had a hard time because we didn't have much of the ball. We wanted the final even if not many people believed us before the tournament," Italy coach Roberto Mancini said after the match.

Spain coach Luis Enrique heaped praise on Alvaro Morata, ensuring he got the due credit for his efforts despite injury concerns. "I think we deserved an 'excellent' if I wanted to give my players marks. I think they've been marvellous. I can't criticise them, I have to praise them. It's time for them to rest now. Morata had an adductor problem but still wanted to take the penalty and that says so much for his personality," Enrique said.

Here's how people on Twitter reacted to the Azzurri's march into the final:

Forza ITALIA! You're one of the best team now. Congrats 🔥

What a great game btw Italy & Spain👏🏽👏🏽👏🏽👏🏽. Italians were fantastic to book their place in the finals with a triumph over @SeFutbol by 4-2 in the penalties ⚽️⚽️

Don Frello enters the history books. An entire nation erupts with joy. Italy are 33 games unbeaten and 1 game away from European glory. Let's go on and win this! 🤌🏼

So, Italy prevailed tonight. Very enjoyable game #ITAESP for the neutrals. Great atmosphere in the #Wembley stadium and outside too. #EURO2020 . pic.twitter.com/MB5G8kOS1V

Italy pushes their way past Spain and into the Euro 2020 final! 😤