The Serb will take on Stefanos Tsitsipas on Friday 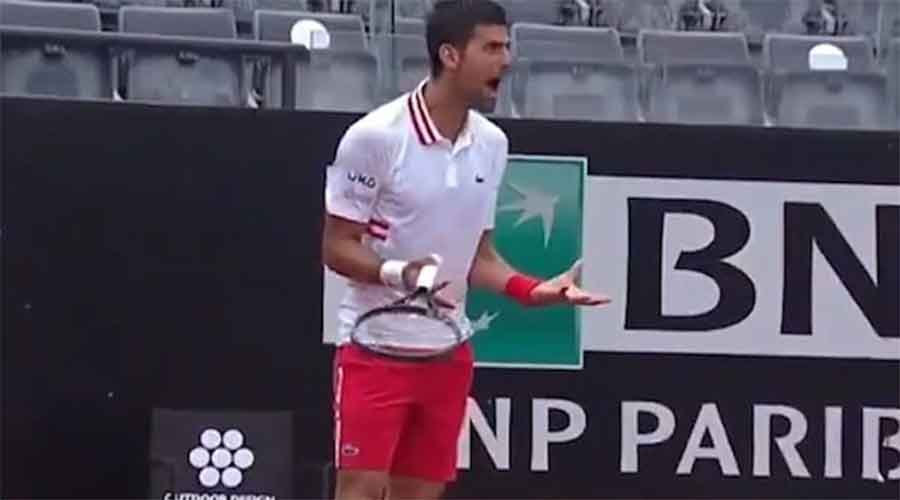 Novak Djokovic in the round of 32 clash versus Taylor Fritz, the Serb snapped at the umpire, but won his match in straight sets.
Picture courtesy Foxsports
Prabhjeet Singh Sethi   |   Published 13.05.21, 09:22 PM

Novak Djokovic might lose his cool in the Italian Open, but he won’t lose his form.

In the round of 32 clash versus Taylor Fritz, the Serb snapped at the umpire, but won his match in straight sets. And today, he beat Spain’s Alejandro Davidovich Fokina in the round of 16 to enter the Italian Open quarterfinals for the 15th time.

The Foro Italico had spectators for the first time in the ongoing ATP Tour Masters 1000 event. Although only 25 per cent of the total crowd capacity was allowed, it was enough for Djokovic to get himself going.

“It was not good, it was great. I missed the crowd. It was nice to see them back,” the 33-year-old was quoted as saying by AFP.

There were jitters in the beginning of the match. Djokovic lost his opening service game, but then regained composure to take control of the match with five serve breaks.

“He started well, but I managed to break back straight away and establish the control and consistency. I thought I played at least 20-30 percent better than on Monday,” the 33-year-old said.

Djokovic is currently the defending champion. In 2020, he had defeated Argentina's Diego Schwartzman 7-5, 6-3 in the summit clash to win his fifth Italian Open title.

Before the Italian Open, Djokovic had skipped the Madrid Open, and lost to Russia’s Aslan Karatsey in the semi-finals of the Serbia Open.

Djokovic will have his eyes fixed on the upcoming French Open, which starts on May 30. He has won the Grand Slam event only once in his career in 2016.