The club managed to hold an in-form Jamshedpur FC to a goalless draw at Tilak Maidan, in Vasco, on Thursday 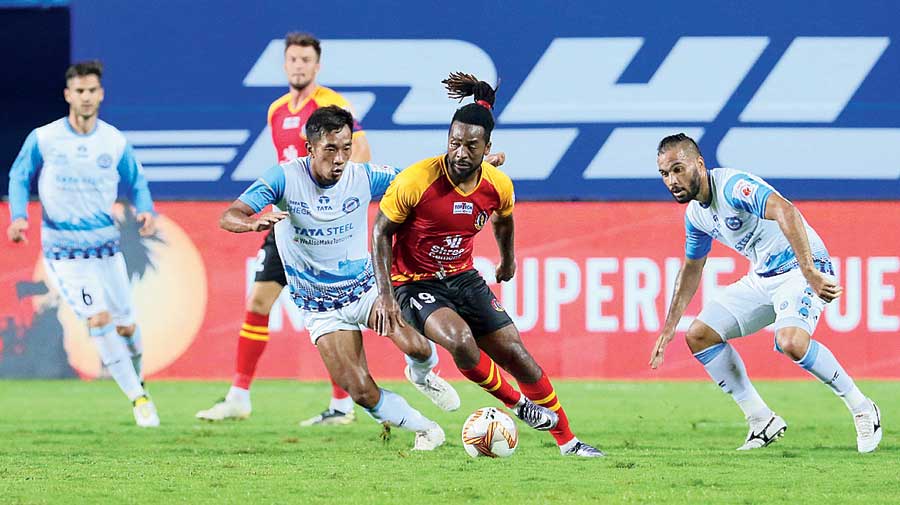 SC East Bengal’s inability to score continues, but they finally managed to register their first point in this ISL.

Playing with 10 men for a good part of the game after Eugeneson Lyngdoh was given marching orders for a second yellow card in the 25th minute, East Bengal managed to hold an in-form Jamshedpur FC to a goalless draw at Tilak Maidan, in Vasco, on Thursday.

Head coach Robbie Fowler was pleased with the effort his men put in, though he again blasted the refereeing standards. Jamshedpur too had to play with 10 men when Laldinliana Renthlei was sent off following a second yellow after tackling Jacques Maghoma from behind. But that was at the fag end of the game, two minutes past regulation time.

“I told the guys just to regroup,” Fowler said at the post-match news conference, when asked what his message was to the players after Eugeneson’s sending off.

“I don’t think any decision is going our way... Looks like everyone does seem to be against us. I tried speaking to the officials but they simply didn’t listen. It’s ridiculous. The standard of refereeing needs to improve.

“Having said that, we got to defend like the way we do. It was important to get the point on the back of three losses. It’s an important point indeed,” the Liverpool legend added.

East Bengal, though, again lacked in sharpness upfront. Fowler, however, preferred to focus more on the commendable show put up by East Bengal defenders. “I must say we defended really, really well.”

Jamshedpur, on their part, were wasteful. But at the same time, credit should also go to East Bengal defender Mohammed Irshad for being rock solid behind and foiling several attempts by Jamshedpur, who were also denied twice by the woodwork.