Having won their first three matches, the Antonio Lopez Habas-coached side lost against Jamshedpur FC 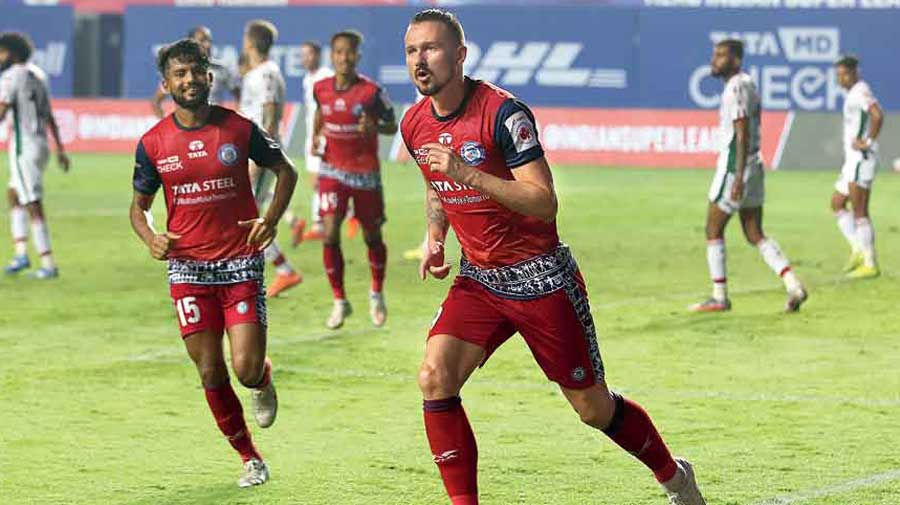 Nerijus Valskis (right) of Jamshedpur FC celebrates after scoring the first of his two goals against ATK Mohun Bagan at Tilak Maidan in Vasco on Monday.
Picture courtesy: ISL
Our Bureau   |   Calcutta   |   Published 11.12.20, 03:27 AM

ATK Mohun Bagan are looking to get back to winning ways when they face Hyderabad FC in an Indian Super League (ISL) match at the Nehru Stadium in Fatorda on Friday.

Having won their first three matches, ATK Bagan lost against Jamshedpur FC. The Antonio Lopez Habas-coached side conceded both the goals were from set pieces.

The coach thinks his players would not repeat the same mistakes. “We can do fantastic work around set-pieces. Last season, we just conceded one goal from set pieces in all matches. Now in one match, we have conceded two. I hope we improve.”

ATK Bagan striker Roy Krishna is in fantastic form. He has scored four out of his team’s total tally of five goals. The Spanish coach thinks they need more scorers. Antonio feels the cramped fixtures are challenging for the players. “It is not good for the team to play every three-four days.

“The humidity, the travel time of one hour 30 minutes, everything influences the final score. But we don’t have any solution for that,” Antonio said.