Alongside the youngster, the captain too made a significant contribution with an unbeaten 73, which also brought back his form and rhythm 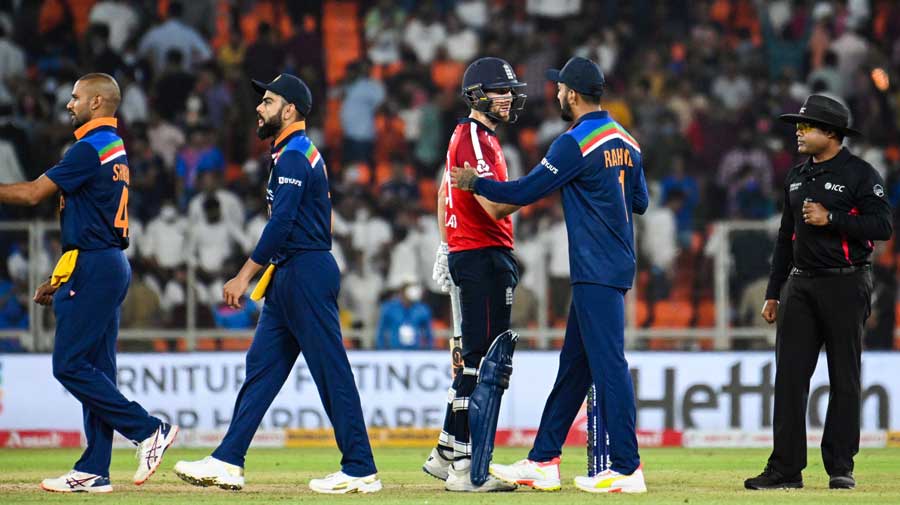 The ICC, in its “Rules and Regulations” page, has updated the ratings of all recent games, and the pitch at the Motera Stadium was rated “average” for that pink-ball Test and “good” for the final match.
Twitter/@GCAMotera
Our Bureau   |   Calcutta   |   Published 15.03.21, 02:01 AM

Virat Kohli heaped praise on Ishan Kishan, who followed up his IPL exploits with a match-winning half-century on international debut against a top side like England.

What seemed to please the India captain most about young Ishan’s innings was his calculated approach that made the task easier for Kohli after India lost KL Rahul early again.

“A special mention to Ishan. I tried to do what I could, but he just took the game away from the opposition. Certainly a quality innings on debut,” Kohli said at the post-match presentation.

“When you play in the IPL with such dominance like he has, against quality bowlers, it really helps. We’ve seen him hit international fast bowlers for big sixes. He knew he was hitting the ball well, but he was calculative and not reckless.

“That counter-attacking innings of his and our partnership was something the team needed,” Kohli stressed.

On his part, Ishan was indeed happy with his knock, but disappointed at the same time for not being able to finish the game. “Credit goes to my seniors who told me to go and express myself.

“It’s not easy to come and play your first game against a quality side. But the time I’ve had for Mumbai Indians helped me a lot and I want to continue the momentum.

“I really wanted to finish the game as there was a senior player batting superbly at the other end. But it’s disappointing not to have finished it off,” Ishan, adjudged Man of the Match, said.

The youngster dedicated the award to his coach. “My coach’s dad passed away a few days back and he always said, ‘You’ve to go out and score’. And I want to dedicate this award to him.”

Alongside Ishan, Kohli too made a significant contribution with an unbeaten 73, which also brought back his form and rhythm. Speaking to the team management, wife Anushka Sharma and a “special chat” with his Royal Challengers Bangalore teammate AB de Villiers turned out to be very helpful for him.

“I was probably thinking of too many variables on the outside. The management spoke to me about things. Anushka is here, so she also keeps talking to me about stuff.

“And I had a special chat with AB before this game and he told me just to watch the ball, which I did,” the skipper said.