Ishan Kishan bats like king in chase against England

His 56 off 32 balls on debut fast-tracked India to beat the 164/6 in 17.5 overs with seven wickets to spare at the Motera Stadium on Sunday 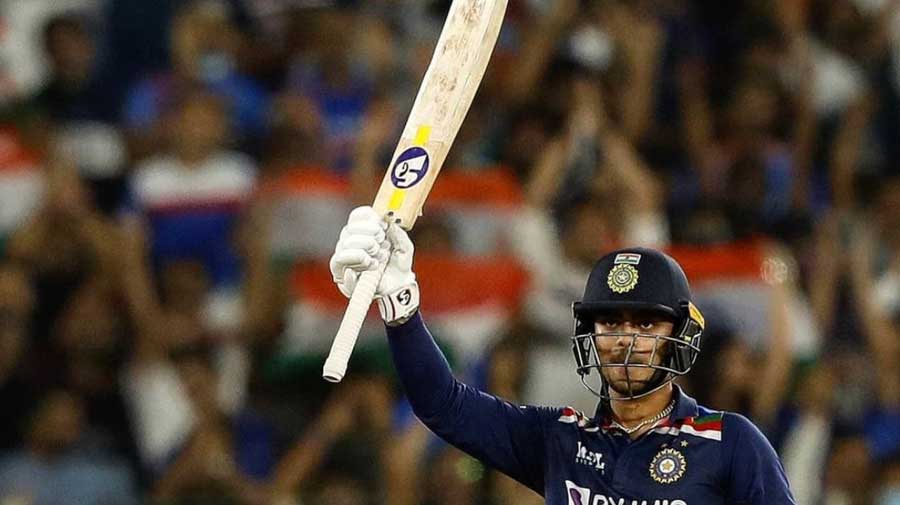 Short, sturdy, bats left-handed — those are the kind of players who have been stealing headlines in Indian cricket in the last few months. It was Rishabh Pant all winter and come spring, Ishan Kishan has blossomed into prominence.

Ishan’s 56 off 32 balls on debut fast-tracked India to chase down England’s 164/6 in 17.5 overs with seven wickets to spare at the Motera Stadium on Sunday. The five-match T20I series is tied 1-1 after two games.

Captain Virat Kohli (73 not out off 49 balls) anchored the chase with a masterclass while Pant (26 off 13 balls) played like he usually does.

Kohli, who was out without scoring in the last match, played a matured-yet-fluent knock. He first played second fiddle to Ishan before coming out of the clouds to hit five fours and three sixes.

Ishan, opening the innings with an out-of-form KL Rahul (0), oozed confidence and went about his shots as if he has been playing them since kindergarten. Though this was his debut match, thanks to the IPL he already had the experience of facing most of the bowlers on the England roster.

He smart-glanced Jofra Archer down the leg, dispatched Tom Curran over long-on, pulled Ben Stokes over deep square-leg, swept Adil Rashid through deep midwicket… The young man from Jharkhand unlocked all kinds of shots and ended up with five fours and four sixes.

Stokes dropped Ishan at mid-on in the eighth over off Rashid. He was on 40 then. Ishan celebrated the reprieve with back-to-back sixes in Rashid’s next over to get to his maiden fifty. The English off-spinner had the last laugh though, trapping the 22-year-old LBW in the same over.

Ishan had done his job by then, leaving India on 94/2 in 10 overs when he walked back. It wasn’t much of a trouble thereafter. Suryakumar Yadav, the other debutant for India, did not get to bat while Rohit Sharma sat out this match as well.

Earlier, England, after being asked to bat, did not get the ideal start, losing Jos Buttler to Bhuvneshwar Kumar for a duck in the very first over. But Jason Roy (46 off 35 balls) and Dawid Malan (24 off 23 balls) stitched up the innings back in shape.

Yuzvendra Chahal did get Malan’s wicket, but the leg-spinner went for 8.5 runs per over as the Englishmen employed the reverse sweep to counter him.

Off-spinner Washington Sundar had a better outing as he picked up the wickets of Roy and Jonny Bairstow (20 off 15 balls). Shardul Thakur too pocketed two wickets.

Eoin Morgan (28 off 20 balls) and Ben Stokes (24 off 21 balls) helped England maintain the tempo, but India, who played with just five bowlers, managed to pull them back, conceding just 35 runs in the last five overs of the innings.

With three matches still to go, the England T20I side will hope to fare better than their Test counterparts, who had fallen face first after winning the opening game.