Together, Du Plessis and Rayudu stitched a vital 115-run partnership for the third wicket after the Super Kings were reeling at 6/2 in the second over of their reply, in response to Mumbai Indians’ 162/9 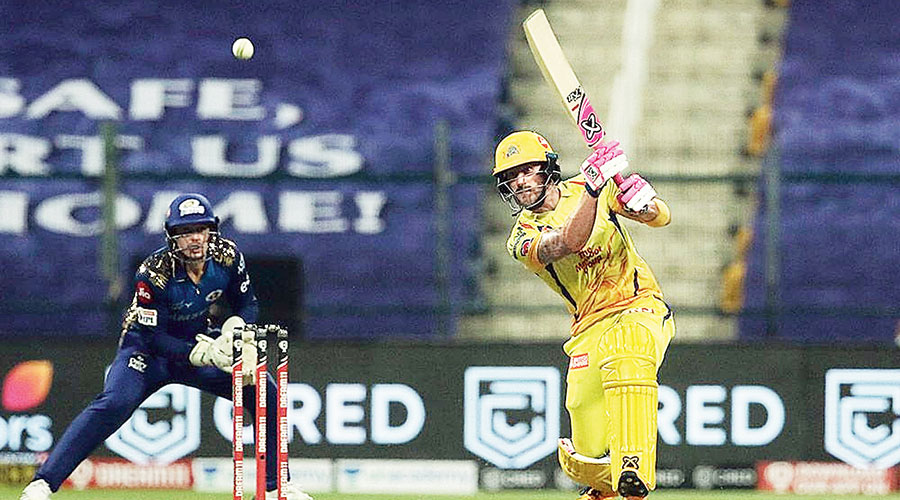 Age is just a number even for cricket’s youngest format.

That was proved again during the opening game of IPL 2020 between the Chennai Super Kings and Mumbai Indians, in Abu Dhabi on Saturday. Thirtyfour-year-old Ambati Rayudu (71) and Faf du Plessis (58 not out), aged 36, came up with performances that helped the Super Kings fly off to a winning start, thrashing the defending champions by five wickets at the Sheikh Zayed Stadium.

Together, Du Plessis and Rayudu stitched a vital 115-run partnership for the third wicket after the Super Kings were reeling at 6/2 in the second over of their reply, in response to Mumbai Indians’ 162/9.

All-rounder Sam Curran played a superb cameo (18 off 6 balls) as the Super Kings reached home with four balls to spare. “You need to send players like Sam up the order so that they can express themselves and intimidate opposition bowlers at the same time,” winning captain Mahendra Singh Dhoni said at the post-match presentation.

Man of the Match Ambati Rayudu en route to 71.
PTI

Dhoni was the other unbeaten batsman, though he faced just two balls. He was given out off the first ball he faced, off Jasprit Bumrah, in the penultimate over of the match. But DRS ruled in his favour.

This was also the Super Kings’ first victory over Mumbai Indians after five matches.

Earlier, Dhoni’s astute captaincy was backed up by some brilliant bowling at the back end as the Super Kings restricted Mumbai Indians even after the latter got off to a flying start.

“None of our batsmen carried on for us, like Du Plessis and Rayudu did for CSK. It’s something we need to learn,” Mumbai Indians captain Rohit Sharma said.