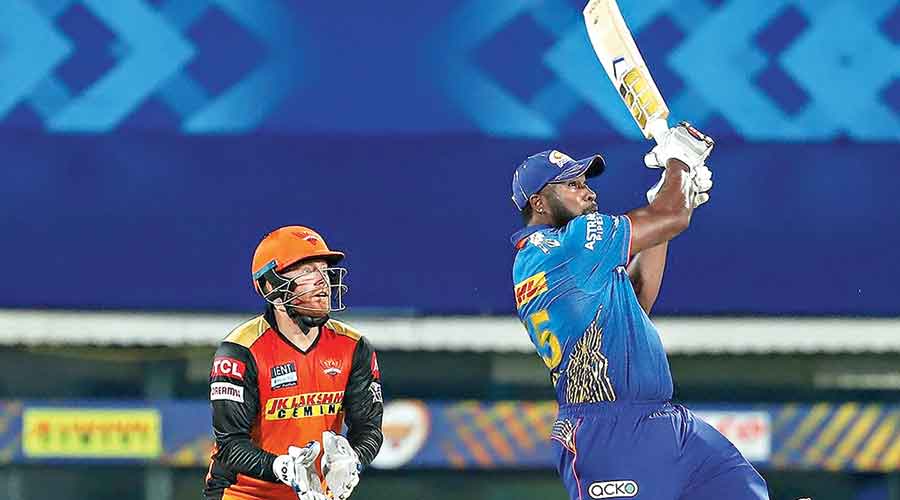 Champion teams do not necessarily do everything right, they just have the right men who can do everything for the team in a crisis. And that is what separated Mumbai Indians from Sunrisers Hyderabad on Saturday.

Mumbai, five time champions, defended a mediocre score of 150/5 to win by 13 runs in Chennai. This was their second victory in three games. Sunrisers, on the other hand, remained winless after three matches.

The Sunrisers, who made as many as four changes to their line-up in search of a win, once again flattered to deceive. After losing to Kolkata Knight Riders by 10 runs and to Royal Challengers Bangalore by 6 runs, one felt that they would finally win their first game of the season when David Warner (36 off 34 balls) and Jonny Bairstow (43 off 22 balls) rocketed off to a flying start during the chase.

Bairstow looked in murderous form and had hit four sixes and three fours when he got out in a bizarre fashion — hit-wicket while trying to go on the backfoot to a Krunal Pandya delivery. That was the beginning of the sunset for the Sunrisers. From 67/1 in the eighth over, they kept losing wickets regularly, as if a timer was set for them, and were finally all out for 137 in 19.4 overs.

Sunrisers desperately need Kane Williamson in their XI. The injured New Zealand captain has not played a game in this edition of the IPL so far.

Captain Warner said after Saturday’s match that Williamson is “coming along nicely”. Without him, and more importantly without a proper replacement, Sunrisers look doomed. Once Warner, Bairstow and Manish Pandey get out, the Hyderabad team fall terribly short of experience and class in the middle and lower middle orders.

The Sunrisers management have surely missed a trick or two at the IPL auction earlier this year.

How good are MI

Mumbai Indians are not playing spotless cricket, but they have a team where all bases are covered. Like on Saturday, while their batting was mediocre, their bowling and fielding were extraordinary.

Rohit Sharma (32 off 25 balls) and Quinton de Kock (40 off 39 balls) gave their team a decent opening stand of 55 in 6.3 overs, but once the captain departed, caught at midwicket while trying to launch Vijay Shankar for a six, Mumbai’s innings slipped into a slumber.

While they scored 53 off the Powerplay overs, they accumulated only 22 runs in the next four overs. The scoring rate further dipped in the next five overs as they added only 26 runs to their total. The last five overs fetched 49 runs to give the Mumbai bowlers something to fight for.

The lower-middle order of Hardik Pandya, Pollard and Krunal Pandya gives Mumbai its muscle. But all three are yet to click with the bat so far. Against RCB, the trio totalled 27, while versus KKR they got 35. The tally looked slightly better on Saturday with Pollard’s 35 not out off 22, but Hardik (7) once again failed to pull off the big shots.

However, Hardik made up for that with the game-changing run outs of Warner and Abdul Samad.

And Mumbai’s bowlers were as disciplined as monks. Note the economy rates: Jasprit Bumrah — 3.50, Rahul Chahar — 4.75, Pollard — 5.00, Tent Boult — 7.63. While Chahar tightened the noose in the middle overs, Boult was unplayable at the death. Both finished with three wickets each.

That explains why Mumbai Indians have been a champion team.

⚫Sunrisers have lost their first three games of an IPL edition for the first time.