With 16 boundaries and two sixes, Mayank's confidence personified during his 195-ball stay at the crease 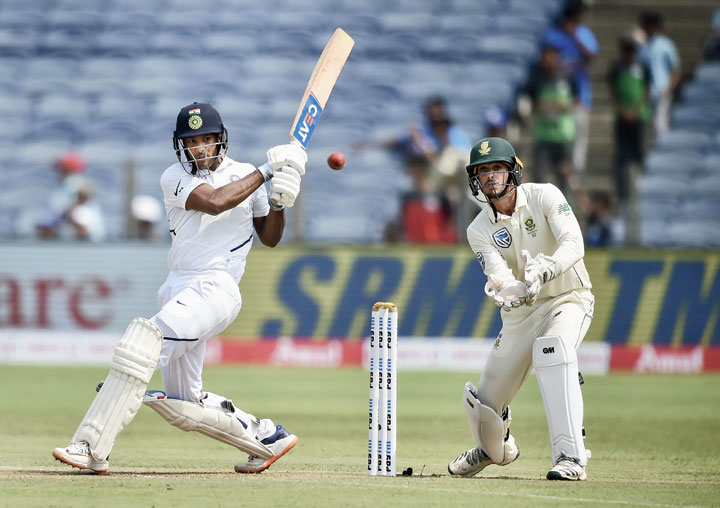 Thursday for India at the MCA Stadium turned out to be like a tricky job interview that ultimately went well.

They were put through some tough tests initially; but once past them, the rest of the road failed to trouble Virat Kohli’s merry men.

So when bad light stopped play a bit early than scheduled on the opening day of the second Test against South Africa, India were shinning bright having scored 273 for three in 85.1 overs.

Kohli walked back to the pavilion unconquered on 63, while Rahane followed him staying not out on 18. This was after Mayank Agarwal scripted another authoritative century and Cheteshwar Pujara contributed a well-made half-century.

For South Africa, it was an opportunity lost. They didn’t lose everything when Faf du Plessis lost the toss yet again because the pitch had enough encouragement for the Proteas pace battery. There was swing and bounce and the ball whizzed past the bat.

But then flying past the batsman’s bat never made a bowler’s day. The finishing “touch” is mandatory.

While South Africa were left to ponder on what could have been, the Indians ensured that they have a good night’s sleep before tackling the second day. Much credit for that would go to Mayank and Pujara.

Mayank, who had recorded a double hundred in the first Test, not only saw off a probing opening spell from the pacers, but also made sure that he translated his hard work into an innings of 108 runs.

Decorated with 16 boundaries and two sixes, the Karnataka batsman was confidence personified during his 195-ball stay at the crease.

Those two sixes came off successive balls from Keshav Maharaj taking Mayank from 87 to 99. That’s swagger of a man confident of his job. Nothing could push the man down, not even a nasty knock on the helmet given by debutant pacer Anrich Nortje.

Pujara, on the other hand, floated like a butterfly while dealing with Maharaj, the lone specialist spinner in the Proteas line-up. He used his feet to perfection as he went on to score 58 off 112 balls. Maharaj toiled hard for 29 overs, but had nothing to show.

Once Pujara and Mayank were dismissed, the onus was on Kohli and Rahane to ensure that the advantage built was retained. They didn’t disappoint.

The second new ball is relatively new having been used for just five-odd overs. Du Plessis would hope that his pacers will do a better job on the second day morning.

The visitors didn’t do miserably on the Day I morning session, but they were not outstanding either. Barring Vernon Philander, the other two Proteas fast bowlers were not disciplined enough. Kagiso Rabada ended the day with all three wickets in his pocket.

It seemed Mayank and Rohit Sharma (14) were laying the foundation of another big opening stand when Rabada produced a gem of a delivery to foil that plan. Landing on middle stump, the ball moved just enough away to force Rohit to poke at it, the resulting outside edge landing in ’keeper Quinton de Kock’s gloves.

A similar delivery saw the end of Pujara, who fell to Rabada when he pushed at a ball on the off stump to offer an edge to Du Plessis in the slips.

Debutant Nortje, who came into the team in place of Dane Piedt, bowled fast but lacked direction. He was almost like a Rolls Royce in wrong hands.

In the post-lunch session, the storyline remained almost the same. Mayank and Pujara had settled like dust on the Pune pitch. And the South Africans continued to roll their arms in futility.

Mayank reached his fifty with a fine boundary through the point region off the bowling of Maharaj. But the shot that somewhat summed up the day, perhaps, came from Pujara’s bat.

Senuran Muthuswamy, bowling left-arm orthodox, gifted a half-tracker and Pujara had all the time to swivel on his backfoot to pull it over the midwicket boundary for six. Not many have seen such disdain from the bat of Pujara, who had just 13 sixes in 71 Tests before this match.