Bumrah has scripted an amazing record — his figures, the least expensive five-wicket haul by an India bowler in Test history 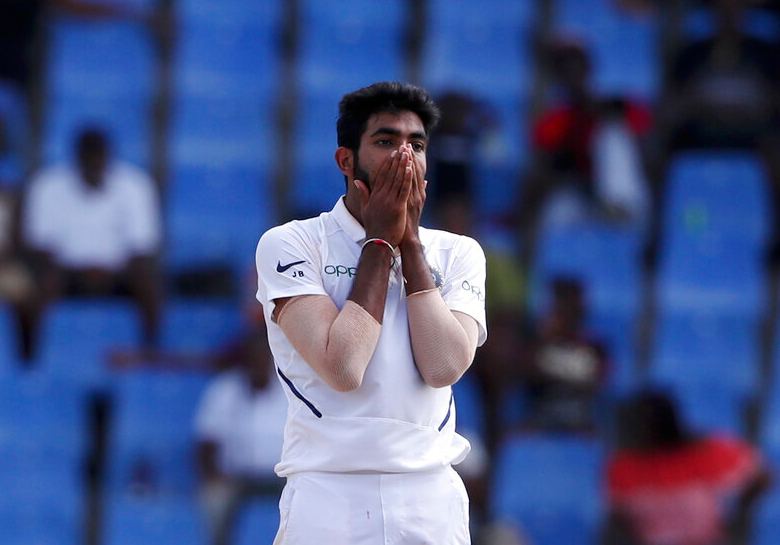 India’s pace bowling mainstay Jasprit Bumrah says he is always evolving to polish his craft, the latest addition to which is the outswinger that he wasn’t particularly confident of until last year.

Bumrah recently became the fastest Indian pacer to 50 Test wickets, during his six-wicket match haul against the West Indies in the first Test here, which India won by 318 runs on Sunday.

“I used to bowl the inswinger earlier, but the more Test matches I’ve played, I’ve gotten more confident to bowl the outswinger, especially since England,” said Bumrah referring to the series in England last year, which India lost 1-4. The 25-year-old has played just 11 Tests in his fast-rising career and has 55 wickets, averaging 20.63 at a brilliant economy rate of 2.64.

“I am feeling very good. As a bowling unit, we came with attacking options. Me and Ishant (Sharma) were trying to use the (width of) crease too, to generate the swing. A lot of hardwork goes into my delivery,” Bumrah said reflecting on his performance here.

“I am always trying to evolve,” he said.

Bumrah, who took his five wickets in eight overs, rattled through the top order, attacking the stumps relentlessly in a devastating spell. In the process, Bumrah scripted an amazing record — his figures, the least expensive five-wicket haul by an India bowler in Test history.

Overall, there have been only three instances of a bowler picking five or more wickets conceding fewer runs. The previous cheapest five-for by an India bowler was six for 12 by Venkatapathy Raju against Sri Lanka in Chandigarh in 1990.

Bumrah now has four five-wicket hauls in Tests. They have come in four different tours so far — South Africa, England, Australia, and now the West Indies. He is the first India bowler, and in fact the first from Asia, to take a five-wicket haul in each of those four countries. Remarkably, he has achieved the feat in just his first set of tours.

He was rested from the limited-overs assignment in the Caribbean as per his workload management plan but Bumrah acknowledged he was slightly rusty in the opening essay of the match, which yielded just one wicket for him.

“I was a little stiff in the first innings since I returned after a break, but things were all sorted by the second innings,” he said.

The pitch was on the flatter side but conditions aided swing bowling and he gave a perfect exhibition of it getting opener John Campbell castled with a moving delivery.

“This wicket was sometimes on the flatter side, that time we had to do things differently. It was swinging today, so we bowled this way. There’s a lot of communication among us, the fast bowlers,” he added.

His pace partner Ishant had a more impressive outing with a match haul of eight wickets and Bumrah spoke about the planning that the two put together to decimate the West Indies batting.

“We decided to bowl cross-seamed deliveries in the first innings. We have a good camaraderie, we all work hard and we all push each other,” he said.