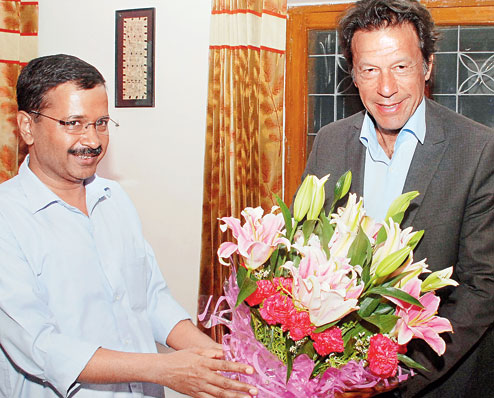 Imran, who heads Pakistan's fast-growing Tehreek-e-Insaaf party, met the Delhi chief minister for around an hour at his 6 Flag Staff Road residence in the Civil Lines area on Sunday evening.

To no one's surprise, the Imran-Kejriwal meeting attracted plenty of attention from the national capital's media corps.

Imran, in fact, had sought an appointment via this Reporter.

Around 11.00 pm on Saturday, Kejriwal's OSD, Nagender Sharma, confirmed the appointment at Imran's preferred time of "7.00 pm or so."

A day earlier, during the course of an interview to The Telegraph, Imran had expressed a keenness to meet the chief minister.

While there is much that's different between Imran and Kejriwal, there's plenty that is actually common between the two.

Both, for example, are anti-corruption crusaders and are all for good governance.

Nationally, Imran's party sits in the Opposition, but the critical border province of Khyber Pakhtunkhwa is ruled by the Tehreek-e-Insaaf.

The province does have a chief minister (Pervez Khattak), but Imran sets the agenda for administration.

Kejriwal, by the way, has accepted Imran's invitation to visit Khyber Pakhtunkhwa.

As important, Imran and Kejriwal would be in contact with each other on issues of good governance.

Imran left Calcutta for New Delhi late on Sunday morning and would return to Islamabad either in the early hours of Monday or by the afternoon.