Destiny was with Ben & England, not Kane & Co.

New Zealand, like Roger Federer, did absolutely everything but win 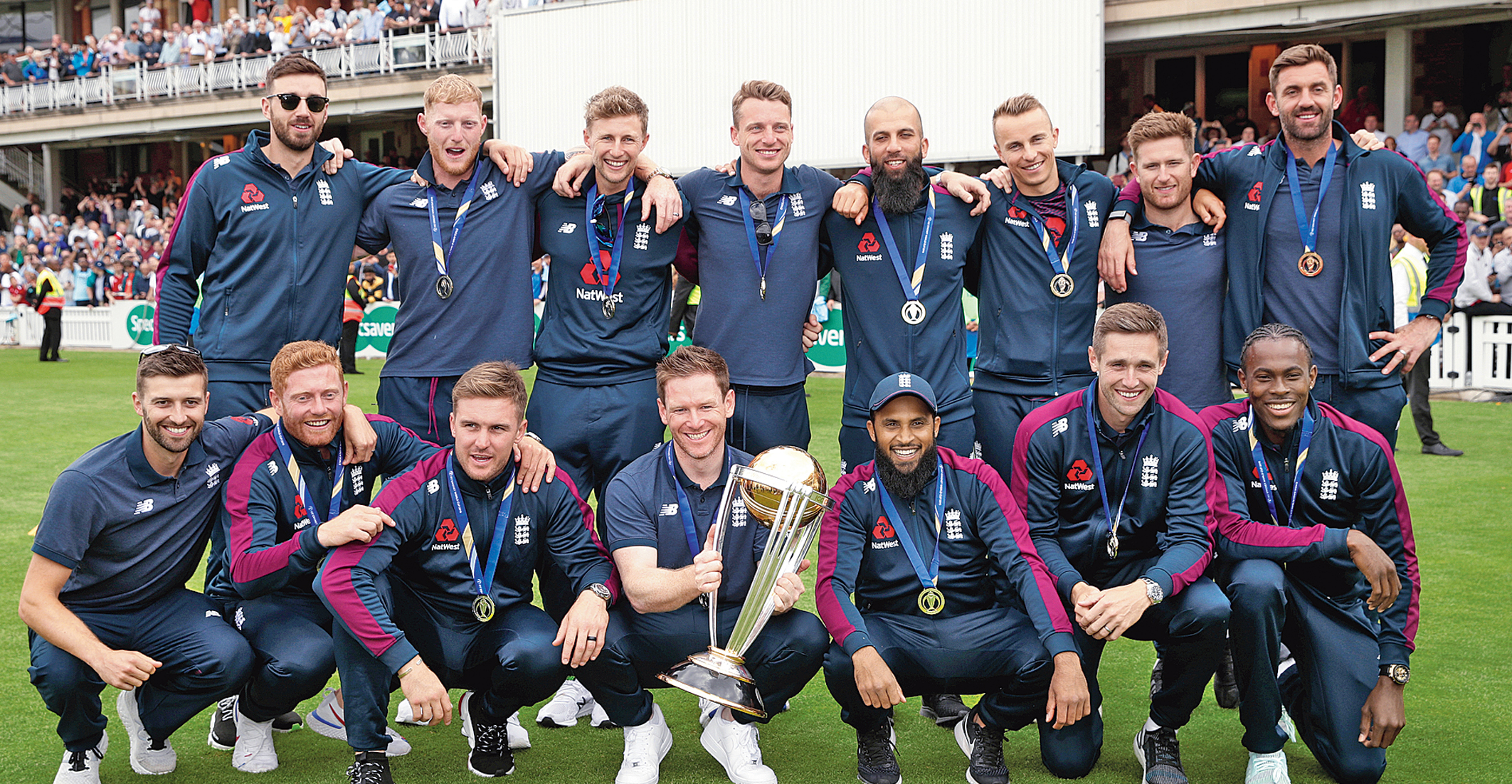 The victorious England players pose with the World Cup trophy at The Oval on Monday. England defeated New Zealand in the final on Sunday.
(AP)
David Ivon Gower   |   Published 15.07.19, 10:55 PM

I am not a huge fan of statements along the lines “That was the finest…” but that was indeed the most extraordinary match that I have witnessed in 44 years as a professional player, broadcaster, journalist and, as of Sunday, helpless spectator.

As the so-called expert amongst the enthusiastic amateurs in Box 23 of the Mound Stand, the last hour of the match proper was spent answering the question “Are we going to win this?’ or variants thereof and for most of that time the honest answer was “probably not”.

My host, Jonathan Marland, Lord Marland to give him his due title, included amongst his guests some big hitters from the business world alongside friends and family, and these men so used to high pressure environments were as helpless as the rest of them at Lord’s as they watched events unfold. It was almost as interesting watching them fret as watching the game itself.

Actually no, the game was far more absorbing, although I was also trying to keep an eye on the TV to track events at Wimbledon. I am a Federer fan as much as a cricket man.

One of the common themes through the day was the observation that the fielding in international cricket has never been better. So true.

The moment of victory itself highlighted that very point. Just imagine being out at deep midwicket and the ball is hit to you, knowing as you do that a fumble will mean the batsmen getting home safely, that a misdirected throw will come with the same penalty and that your dreams of being World Cup winners will disappear more quickly than the smoke from the celebratory fireworks that will light the air above Lord’s a few moments later.

Imagine being the wicketkeeper who has to take the ball cleanly, not rush or fumble just because time is so much of the essence, and make the required ground to the stumps to break them before the batsman, equally aware that time is running out for him, makes that last desperate dive to claim victory for himself and his team.

All those elements had to come together. Jason Roy was quick to the ball and sure with his hands. The throw was only a little way off target and Jos Buttler was cool and efficient in his take and his dive to the stumps.

I’ve seen him miss the bails when standing at the stumps but somehow this was easier and those few seconds of action decided the destiny of both the World Cup 2019 and the team that had worked so brilliantly for four years to expunge the embarrassment of 2015, to set themselves up as tournament favourites and ultimately to deliver the prize by the absolute slimmest of margins. To tie twice on the same day and still win is just unique.

Talking of destiny, at the end of England’s main innings, when Stokes was so nearly caught on the boundary, when the deflection went for those definitively vital extra four runs, I thought Destiny (the capital D is deliberate) was with Stokes and England.

In the Super Over, when Jimmy Neesham clogged that ball effortlessly long over midwicket for six, I thought that Destiny had left the ground for an early dinner appointment but no, she had obviously only just popped out for a moment (how dare she!) and was back to see England take the win after 44 years of trying.

If the final missed out on the sort of unstoppable strokeplay that some had optimistically hoped would characterise this World Cup, it made up for it with palpable tension. It was not a great pitch but those that worked it out did enough to keep the game tight and tense.

For Colin de Grandhomme to be the most economical bowler by a distance points to the sort of slow, unhelpful pitch it was, however much credit is due to him in the way he controlled both his 10 overs and England’s batsmen.

To the batsmen who found ways to score again all credit for compiling their runs rather than blasting them, not that the latter was really an option. Buttler was the man who probably timed the ball better than anyone but of course it was Stokes who redeemed himself the best.

For Ben Stokes, life since the major downs in his career, being hit out of the ground by Carlos Braithwaite in the World T20 final and himself hitting out without any care or attention outside that night club in Bristol, has been hard.

Since all that he has apparently lacked some of the flair that made him such an outstanding cricketer but this tournament has given him the opportunity to prove his worth in other ways. Twice he made obdurate runs in losing causes against Sri Lanka and West Indies, on Sunday he made more such hard-earned runs in a winning one.

I cannot emphasise enough how tough those runs must have been and how much inner confidence it takes to both keep going in an alien way and then to take the final, successful, punts on when to go for gold.

I thought he had the right plan too for that final ball of the main innings. With all that space in front of the fielders it was a choice of splitting the field with the big shot and going for glory that way or playing the little bunt that could easily have given them the space to complete the two and win the game. It was, I think, the percentage ploy and a clever one but he overhit it to the tune of no more than a yard or two and again the fielding and the throw were spot on.

He trains harder than any of these very fit, modern-day cricketers. Ask anyone in that England squad and they will tell you that there are times they have to persuade him not to do more but, even though he still looked and admitted to being near exhausted at the end, the value of all that work was displayed in full at Lord’s. As one for whom training was a bit of an added extra I can only stand and applaud Stokes’ individual efforts to make him the best possible version of himself and the same goes for the team, which Eoin Morgan has led so very positively and driven so very hard.

Traditionally we in England tend to mock our four-year plans that have so often ended in total confusion weeks before a World Cup. The year 1999 saw them ousted in a short group stage before the team song (hah!) had even been released and four years ago Morgan himself was given the hospital pass that saw him take over as captain from Alastair Cook in the final build up to that last World Cup and inherit a side that was neither his nor set up to play the sort of cricket would win matches. At that stage we were behind the curve, now we can say that all responsible for this win have put England nicely ahead of it.

The margin of victory being so infinitesimally small, I cannot but sympathise with Kane Williamson and his team, who were doggedly brilliant in trying to defend the 241 that most at the ground thought would be insufficient.

He has set incredibly high personal standards and his team have done exactly what I said they would in coming together as the most determined eleven they can be on each and every day. The whole did indeed come to more than the sum of its parts and missed out on glory by a fraction of an inch here and there.

For most of that England chase I thought the Black Caps had the edge. There seemed to be hardly a bad ball bowled, hardly an error in the field, all in the context of a World Cup final.

It is never consolation that you have done absolutely everything but win — just ask Roger Federer — but they can be mighty proud of all that they did to make it the most unbelievable final ever.