I think I stand for old-school values, says Cesaro

‘My goal was never to become famous, I just wanted to be the best wrestler I could be’ 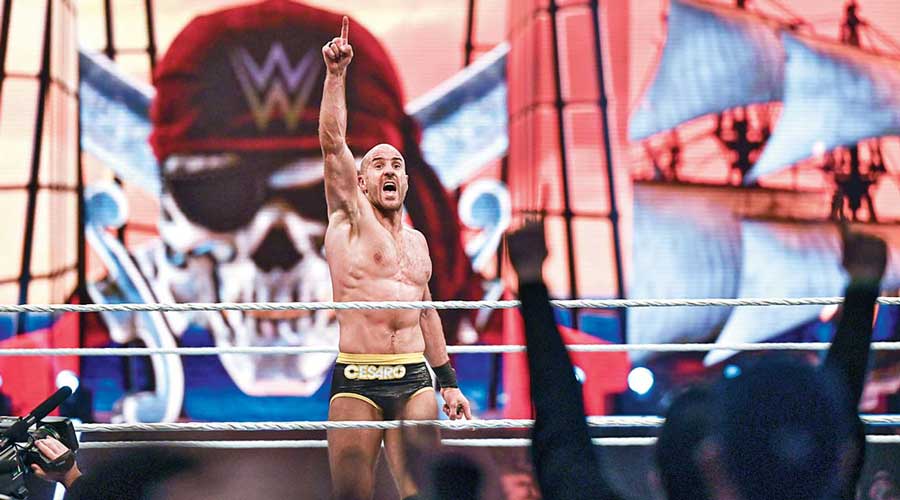 In an exclusive chat with The Telegraph, WWE superstar Cesaro discusses his wrestling roots, his spectacular run in 2021, his love for coffee and James Bond, cheering for the Swiss at Euro 2020, and much more!

While growing up in Switzerland, you played a number of sports like tennis, football, and basketball. What made you choose wrestling as a career?
I guess I wasn’t as good as Roger Federer at tennis and I wasn’t good enough to get into Swiss national team as a footballer! Growing up, I played all the sports that kids play, you know. I saw wrestling for the first time when I was maybe 11 years old and I was like I want to do this when I grow up. It was a dream.

Many in the wrestling industry have described you as a rarity, as someone with old-school wrestling values. Do you agree and what exactly do these old-school values mean?
I love that people think so. I think I stand for old-school values. I believe that if you work really hard, if you believe in your dreams, if you do things the right way, then you will succeed. One of the first WWE wrestlers I met was The Honky Tonk Man and he told me you need three things to be successful in wrestling: desire, dedication, and hard work. And that has always stuck with me. If people think I have old-school wrestling values, it’s because I love wrestling. My goal was never to become famous, I just wanted to be the best wrestler I could be. I learnt the European style, then the American style, then the Japanese style, then the Mexican style. I have a lot of respect for these styles and for wrestling, and I put a lot of work into it.

Your signature move, the Cesaro Swing, is one of the most entertaining manoeuvres in WWE history. Where did you get the idea for this ridiculously innovative move?
It’s an old-school wrestling move. If you watch old pictures of people grappling, that’s one of the moves they try to do. I saw some legendary Japanese wrestlers do it first and then I did it on the independent circuit before I came to WWE. I felt this was something old school and yet nobody does it any more. In WWE, I did it for the first time in Toronto against Santino Marella. People just took to it, loved it, and I have been doing it ever since.

There is this perception among fans and wrestling critics that you are an underrated wrestler. The Wrestling Observer Newsletter even named you the most underrated wrestler in the world a record four times between 2013 and 2016. How do you feel about this tag of being called underrated?
I take it as a big compliment, because it shows that people believe in me. I’d rather be the most underrated and have people see me succeed rather than people saying that he’s the most overrated, you know.... It’s great to see people all over the world understand my character and gravitate towards me. There’s generally some language barrier in WWE, especially for non-English-speaking viewers, but the energy they (the fans) bring is universally translated. So I’m really glad about that.

You have had a fantastic 2021 so far, feuding with the likes of Seth Rollins and Roman Reigns. Do you feel that after being in WWE for close to a decade, you are now reaching your peak as a performer?
I hope so... I always try to be better... I always try to see what the next step is. I think it’s finally time for Cesaro to be Universal or WWE Champion.

Any chance we might see you at Hell in a Cell?
I hope so... yes! As soon as this thing (the sling around his arm) comes off. I want to beat the hell out of Seth Rollins! I’m coming for him, hopefully at Hell in a Cell.

Let’s move on to your love for football now. With Euro 2020 going on, how excited are you and how far do you think Switzerland can go?
I’m very excited. I read this quote by Granit Xhaka (Swiss captain) that he has packed all his stuff to stay all the way through to the finals. So let’s hope Switzerland make it to the final, and for everybody in India who doesn’t have a team yet, support Switzerland!

Do you have a second team you like to root for?
My godfather was a huge Germany fan. That was at a time when Switzerland hadn’t made it to a major tournament in years. So I needed a second team to support and now I have Switzerland, Germany, and Italy... a lot of countries I have feelings towards.

The countries you mentioned, you also speak all their languages, don’t you? How many languages do you speak?
Five. Swiss German, German, Italian, French, and... oh!.. English!

Do you want to add a sixth one?
Yes, I’m trying. It’s very hard, though. Wherever we go, I try to pick up a word here and there. I really hope we come back to India soon, so that I can pick up a word or two (of Hindi).

You happen to be a coffee aficionado, and of course, you have travelled extensively. So please help us resolve the question about which country has the best coffee in the world.
It’s really hard to pick because there are so many good coffee places. Everywhere in the world they make coffee a little bit differently, right? That’s what I love about coffee. Wherever I am, I like to go to a local coffee shop and spend the day there. Then that becomes a good memory associated with coffee. What makes coffee special is also what makes wrestling special: both bring people together.

You are also a massive James Bond fan. Has that fandom ever influenced your in-ring persona?
Yes, it has, on purpose. I’m a huge Bond fan, a huge fan of action movies as well. What I love about the Bond films is that they always have a bit of humour in them. There’s always stuff that’s fun, that’s kind of tongue-in-cheek. That’s what I try to bring into my character as well.

Best piece of advice you received in WWE: Make everything you do mean something

One Swiss city you feel everybody should visit: Lucerne

One thing you cannot travel without: My music