Cops were seen wielding batons to hold back the violent visitors; England held to 1-1 draw at home 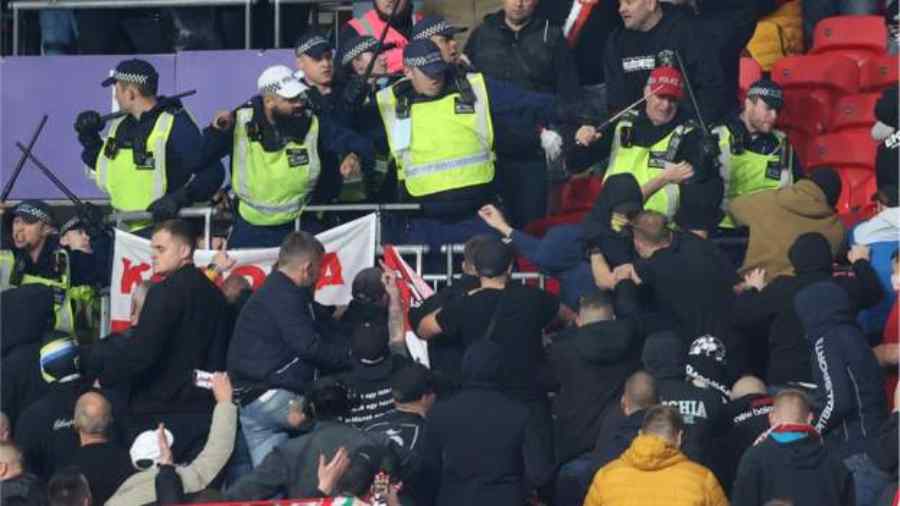 Crowd trouble marred World Cup qualifiers as Hungary fans clashed with the police during a 1-1 draw against England at Wembley Stadium. The disorder in London happened around kickoff after England players taking a knee had been booed by the visiting fans.

"Officers entered the stand to arrest a spectator for a racially aggravated public order offence following comments made towards a steward," the Metropolitan Police said in a statement. "As the officers made the arrest, minor disorder broke out involving other spectators."

Police were seen wielding batons to hold back the visiting fans. The remainder of the game passed off largely peacefully. Luke Shaw's foul on Loic Nego led to Roland Sallai putting Hungary ahead from the penalty spot in the 24th minute.

England equalized in the 37th when John Stones turned in a free kick from Manchester City teammate Phil Foden.

England coach Gareth Southgate even took captain Harry Kane and Raheem Sterling off with 15 minutes to go for Jordan Henderson and Tammy Abraham.

But England couldn't produce a winner, dropping points in a home qualifier for the first time since a draw against Ukraine in September 2012.

"Full credit to Hungary. I thought they caused us a tactical problem and I don't think we played at the level we needed to play.

"We'll go away and think about the balance of the team but individually we can do better as well. We shouldn't just judge things on one game, right across the board we weren't sharp with our play, gave the ball away."

Disorder by Hungary fans including racism during the home match against England in Budapest last month led to Hungary having to play Saturday's game against Albania in an empty stadium.

FIFA put Hungary on probation with the threat of another game being played without fans if there was further disorder at games.

Poland's players walked off in Albania after bottles were hurled in another Group I match. Karol Swiderski had just scored for Poland in the 77th minute when he was struck by a bottle thrown from the stands. It led to the game being suspended for around 20 minutes before Poland returned to the field and held on to win 1-0.

Euro 2020 finalist England are now three points clear of Poland, with games against Albania and San Marino remaining next month in the pursuit of automatic qualification for the World Cup in Qatar next year.