Homecoming: The nation reclaims its medallists with uninhibited adulation

From fan frenzy and chaotic scenes at the New Delhi airport, the evening slipped into a gala felicitation of the Olympic heroes organised by sports minister Anurag Thakur 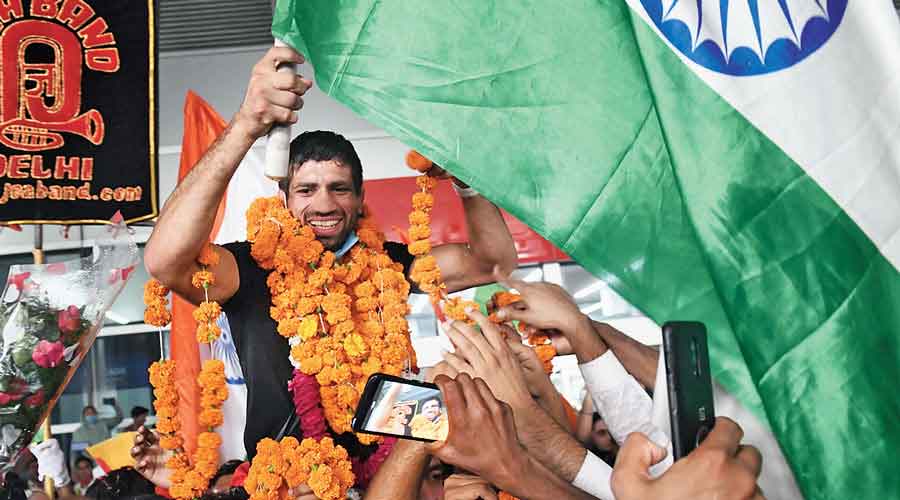 Euphoric fans and enthusiastic politicians welcomed home India’s Olympic contingent, who returned to the country on Monday from Tokyo.

From fan frenzy and chaotic scenes at the New Delhi airport, the evening slipped into a gala felicitation of the Olympic heroes organised by sports minister Anurag Thakur.

Gold medal-winning javelin thrower Neeraj Chopra was expectedly the cynosure in the ceremony at a five-star property in the capital.

The medal winners were presented with mementoes and shawls by Thakur. The hockey teams, men’s and women’s, cut cakes to celebrate their exemplary performances at the Games.While boxer Lovlina Borgohain and wrestlers Ravi Dahiya and Bajrang Punia also enjoyed the limelight, shuttler PV Sindhu and weightlifter Mirabai Chanu could not attend the ceremony as they had returned from Tokyo earlier and are currently at their home bases.

Gold winner Neeraj had a message for aspiring sportspersons — “I just want to say, no matter who the opposition is, give your best. That is all you need to do and this is what this gold medal stands for. Never fear the opposition.”

Earlier, the jubilation at the airport, though somewhat chaotic in these pandemic times, took the athletes by surprise.

“It is the first time we are seeing a reception like this, it is very heartening,” said race walker KT Irfan, who competed in the 20km race walk event.