Advertisement
Home / Sports / Heads or tails, dew or dry, England conditioned to win them all

Heads or tails, dew or dry, England conditioned to win them all

Batting wasn’t the easiest on the Sharjah surface when the team were put in, but Jos Buttler’s brilliant unbeaten century helped them post a competitive 163/4 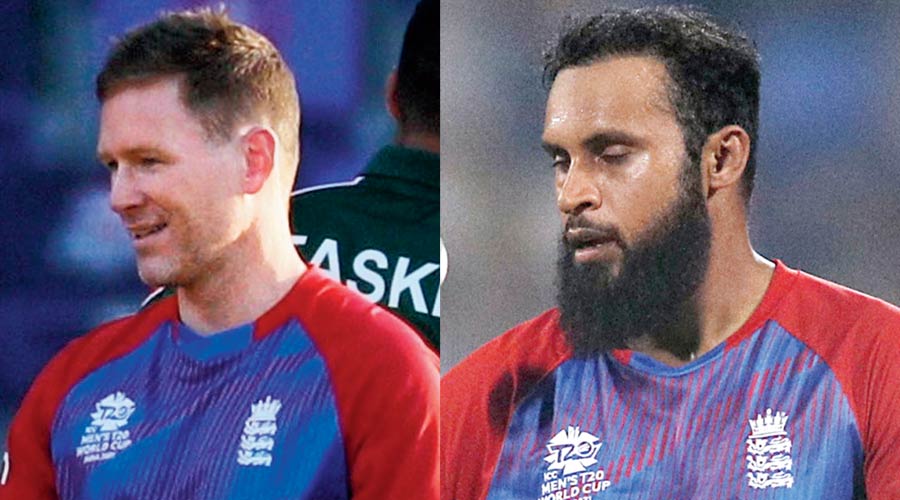 The conditions weren’t ideal for England when they batted and bowled during Monday’s Super 12 game versus Sri Lanka at the Sharjah Cricket Stadium. Yet, they managed to win and that too by a sizeable margin.

When some of their rivals, even the best of them, have cried over the differences in conditions making the scenario all the more difficult for teams bowling second in night matches of this T20 World Cup, England just showed how the job can be done. Regardless of how challenging the conditions appear to be.

Batting wasn’t the easiest on the Sharjah surface when England were put in, but Jos Buttler’s brilliant unbeaten century helped them post a competitive 163/4. Thereafter, their bowlers braved intense dew and kept striking at regular intervals with the wet ball to thwart the Lankans.

“The dew was bad and it certainly changed the conditions. That was one reason we bowled Adil (Rashid) out as early as we could to give him the best chance to bowl with a drier ball.

“The dew just made the ball skid on a bit more,” Buttler said, talking about England’s strategies to overcome the dew.

The consistent Rashid struck twice, conceding only 19 in a very good spell of

spin bowling. Sri Lanka, though, kept fighting despite losing half their side, with Wanindu Hasaranga and captain Dasun Shanaka exploiting the conditions to their advantage, till Jason Roy’s wonderful work at the deep broke their partnership. Buttler then ran the Sri Lanka skipper out to virtually seal the game for England.

Captain Eoin Morgan too deserves a special mention. Along with getting some runs and stitching a game-changing partnership with Buttler for the fourth wicket, Morgan remained calm in those pressure moments, handed the ball over to the right bowlers at the right time and didn’t panic after Tymal Mills left midway during his second over due to a tight right quadricep.

Who would complete Mills’ unfinished over was certainly was a tricky call England had to take. Morgan brought on Chris Woakes, and the ploy worked as the seamer gave away only two runs off those remaining three balls.

“With the short boundary, we felt it was going to be the big three balls in the game if those two (Hasaranga and Shanaka) targeted Moeen (Ali) in that situation,” Buttler said, explaining why Woakes was preferred over off-spinner Moeen in that critical 14th over.

In terms of field placement too, Morgan was spot-on. “Eoin had a long off, long on and Roy right behind Moeen because he knew where the batsmen were going to hit. He got absolutely everything right and you could sense that,” former England skipper Nasser Hussain said on Sky Sports.

“Everything they did was spot-on in those last 15 or 20 minutes.”

Importantly, what England also proved was that the toss cannot really be the deciding factor of a game.

“For the tournament, it was a good result because it’s proof that if you’ve got a quality side and you’re asked to bat first, you can still win the game later on in the evening, even with a wet ball,” Hussain emphasised.