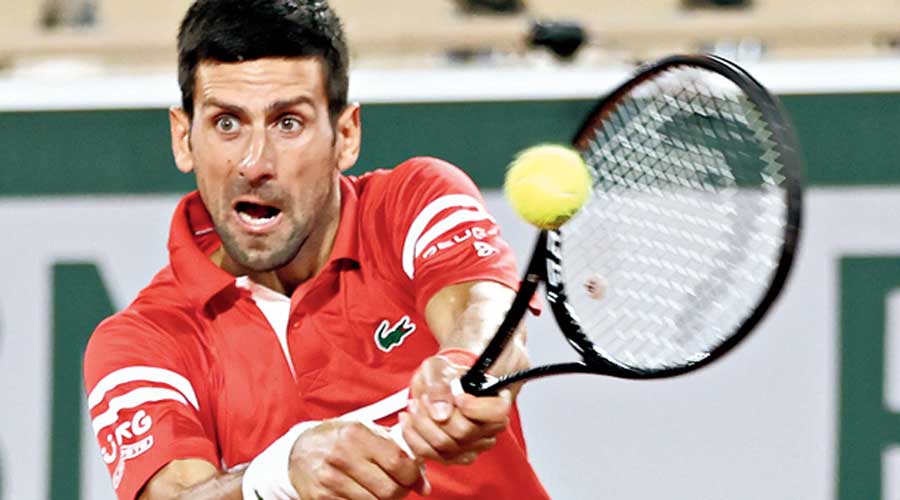 Novak Djokovic during his quarter final match against Italy’s Matteo Berrettini at the French Open on Wednesday.
Getty Images
Agencies   |   Paris   |   Published 11.06.21, 02:07 AM

The blockbuster French Open semi-final between Rafael Nadal and Novak Djokovic is set. Ever since the draw placed these arch-rivals in the same half two weeks ago, this tantalising showdown was the stand-out prospect, and both players set up a 58th meeting for Friday by surviving minor scares to come through their quarter finals on Wednesday.

Djokovic himself called it a “great battle” with the Serb just a shade ahead in the head-to-head at 29-28. Nadal had been his nemesis at Roland Garros, winning seven of their eight clashes, including last year’s final.

“It’s not like any other match. Let’s face it, it’s the biggest challenge that you can have playing on clay against Nadal on this court. It doesn’t get bigger than that.

“There’s that extra tension and expectations. The vibes are different walking on the court with him. But that’s why our rivalry has been historic I think for this sport,” Djokovic said.

The world No.1’s clash with Berrettini was played in front of a raucous 5,000 crowd on Wednesday, until the 11pm curfew kicked in midway through the fourth set. The match was delayed for about 22 minutes while the spectators were cleared out.

Some disappointed and angry fans jeered and even sang “We’ve paid, we’ll stay” as they initially refused to leave at 10.45pm as curfew approached. The players had to walk off the court till the fans left.

Looking ahead to the semi-final, Nadal said: “It’s always a big challenge. That’s something that is good because we are living the sport for these moments. The negative thing, it’s difficult because you play against one of the best players in history.”

Slovenian Zidansek made a flying start with her aggressive style but 31st seed Pavlyuchenkova proved way too solid in the end.