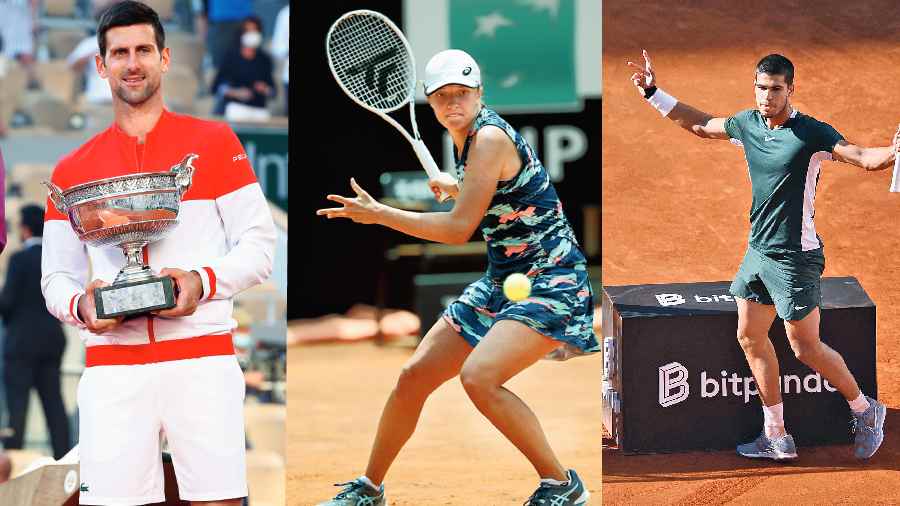 The 126th edition of the French Open begins in Paris on Sunday, giving defending champion Novak Djokovic the chance to play catch-up with Rafael Nadal and win a record-equalling 21st grand slam title. For Nadal, however, this is his kingdom and he may yet increase the gap between him and the other two of the Big Three — Djokovic and Roger Federer.
The Telegraph takes a look at what will make the second grand slam of the year special.

Star in the making

Nadal and Roland Garros are synonymous. His total of 13 singles titles in this grand slam is way ahead of Bjorn Borg’s six, the second on the list in the Open era. And among the present rivals, Djokovic has won only twice on the red clay courts.

While Nadal is a natural favourite, the foot injury that he aggravated during his last-16 match against Denis Shapovalov at the Italian Open puts a question mark over his performance.

Novak, ranked No.1 in the world, is tipped to retain his crown. But there is a new star lurking just beneath the aura of the big names. Spain’s teen sensation Carlos Alcaraz has announced his arrival in the big league with a bang this season.

Outside the top 100 a year ago, Alcaraz is now ranked sixth in the world. After winning at Miami and his amazing performance at the Madrid Open, where he defeated Nadal, Djokovic and defending champion Alexander Zverev, the 19-year-old is the dark horse at the French Open. Already touted as the next Nadal, this may just be the right platform for Alcaraz to be the prince of clay.

With just 680 points separating world No.2 Daniil Medvedev from top ranked Djokovic, there is chance for the Russian to claw back to the top. But having been out of action for five weeks

recovering from a hernia surgery, Medvedev lost in his return to the clay court season in Geneva and will have to better his last year’s performance — a quarter-final finish — if he has to threaten the Serb.

World No.1 Iga Swiatek arrives at Roland Garros riding an incredible 28-match winning streak that started in Doha in February. This is the longest unbeaten run on the WTA Tour since Serena Williams won 34 matches in a row in 2013, and should Swiatek pick up a second Roland Garros title, she would equal Venus Williams’ streak of 35 consecutive victories from the year 2000.

Swiatek’s winning streak saw her capture five consecutive titles — Doha, Indian Wells, Miami, Stuttgart and most recently the Italian Open. The 20-year-old is just the second player to win four WTA 1000 trophies in one season, behind Serena Williams, who achieved that feat in 2013.

Barbora Krejcikova, the world No. 2, is the defending champion here. But an elbow injury has marred her claycourt season this year and she may not be at top form during the second grand slam of the year.

Only two French nationals have lifted the singles trophy at the Roland Garros in the Open Era. Yannick Noah won the men’s title in 1983 and Mary Pierce won the women’s in 2000.

The French Open is the only grand slam to be played on clay courts. But what are the courts really made of? There is hardly any clay in the composition of the courts. They are built in layers, with the top layer being a 1-2mm covering of red brick dust which gives the Roland Garros courts the distinctive colour. Below it there is a 6-7cm or crushed white limestone, then a 7-8cm depth of clinker (coal residue), then at least 30cm of gravel and then the drains at the lowest level.

What’s in a name?

Roland Garros was a First World War hero and a trailblazer for aviation who was killed in action in the Ardennes. But he hardly had any connect with tennis. In 1928, ten years after his death, the tennis stadium that was built for the France team to defend their Davis Cup title was named after him, at the request of Emile Lesueur, president of the Stade Français and Garros’ former classmate.

The fifth edition of the Roland Garros eSeries by BNP Paribas marks a change in the international scope of the world’s biggest eTennis tournament, the only tennis gaming competition organised by a grand slam.

For the first time ever, the tournament will be played on mobile phones, more specifically on Tennis Clash, a free tennis game. The game is available in 241 countries, thus giving ever more

eTennis fans the opportunity to enter the tournament free of charge. The Philippe-Chatrier court is represented in the game. Participants will see their player dressed in the official Roland Garros 2022 outfit.