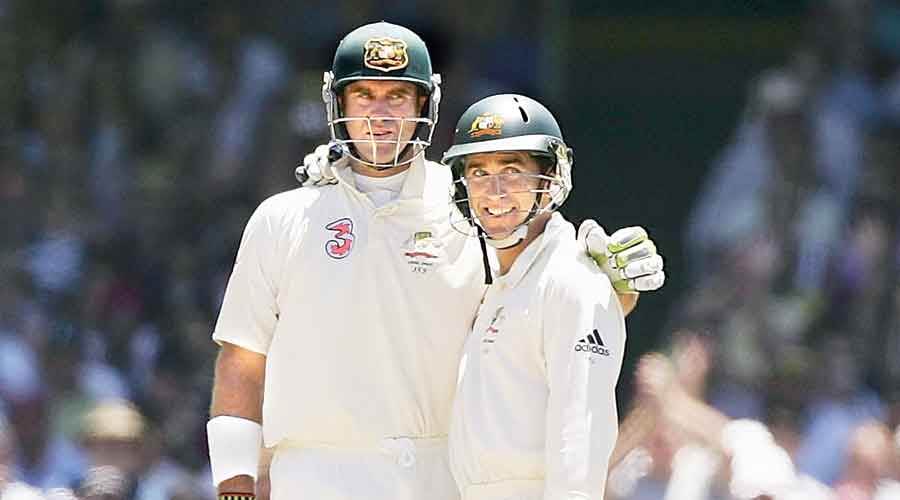 Opening partners Matthew Hayden and (right) Justin Langer, whose respective wards Pakistan and Australia will face off against each other in the second T20 World Cup semi-final on Thursday, during the 2007 Ashes series in Sydney.
Getty Images
Sayak Banerjee   |   Calcutta   |   Published 11.11.21, 02:15 AM

With Justin Langer, Matthew Hayden had stitched several dominating partnerships that laid the foundation for many an Australian victory in Test cricket, till the former retired after the 2006-07 season.

Alongside being the most intimidating opening combination in their time, Hayden and Langer happen to be good friends as well. But till Thursday’s semi-final between Pakistan and Australia gets over, the close friends will certainly be having plenty of things to ponder, especially being part of rival camps.

Hayden, the Pakistan batting consultant, however, minced no words to describe the “unusual feeling” he has been going through, chalking out strategies along with the rest of the coaching staff against his country, for whom he has played for with so much of passion and devotion. And at the same time, seeing his long-time teammate and Australia head coach Langer as a vital cog in the opposition think-tank.

“It is a very unusual feeling. As you all know, I was a warrior for Australian cricket over two decades, so that does give me the benefit of having wonderful insights not only into these players, but also into the culture of cricket in Australia,” Hayden said on the eve of the second semi-final in Dubai.

“I think the roles of roving mentors, coaches across the global platform have been a significant area where other nations, including our own, can benefit — increasing and improving or adding value to the standards of cricket. We’ve seen how that has worked through the IPL, for example.

“I guess from my point of view, there’s the challenge of the heart, the challenge of the mind in terms of what’s going to happen over the next 24 hours. Justin Langer and myself are in similar positions, as a national coach or a batting coach never wins a game of cricket. The XI that take part in the game win the game, and we are back-ups only,” Hayden argued.

was even heard saying “Inshallah” during the news conference. Something that’s not too common, particularly in case of players or coaches from England, New Zealand, South Africa and of course, Australia.

Feeling the emotions that ran through the Pakistan camp going into their campaign-opener clash versus India, Hayden emphasised that the win against Virat Kohli and Co. had set it up perfectly for Babar Azam and his men.

“The highlight and the obvious eye will go to the first game that we played here in Dubai, against India. The pressure that I never really understood when I was inside the dressing room, something which is only comparable to an Ashes series for Australia, but these boys handled it very calmly and were confident in their approach.

“That game really set us up for what has been a really lovely four weeks of solid work, great commitment to training, great purpose in general, and also a wonderful heart connect to how spirituality has played its role within the Pakistan team as a great guide and tool for everyone to come together,” Hayden emphasised.