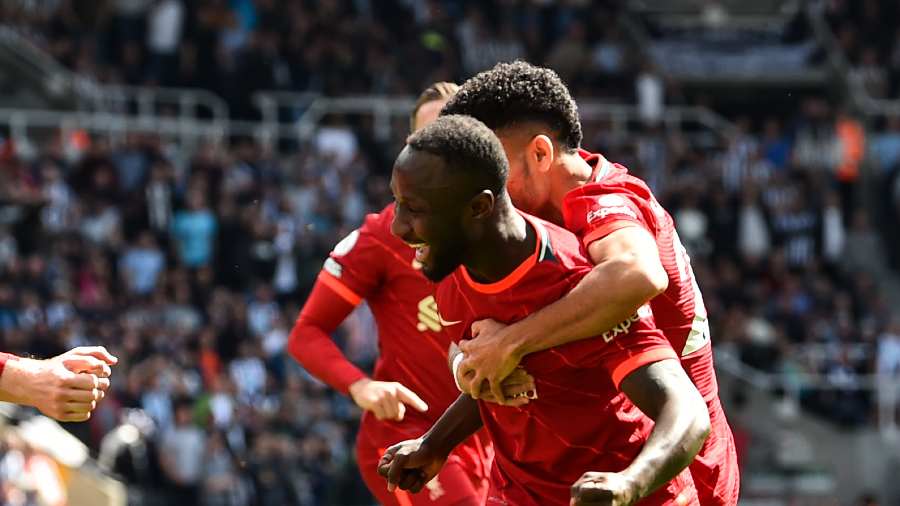 Our people were outstanding and Newcastle are obviously a really passionate crowd, says Klopp
Twitter
Reuters   |   Newcastle   |   Published 01.05.22, 02:33 AM

Manchester City returned to the top of the Premier League standings after a rampant 4-0 victory at Leeds United on Saturday.

Liverpool had regained top spot earlier in the day with a 1-0 win at Newcastle United, putting pressure on the champions to respond against a Leeds side battling to avoid relegation this season.An early goal settled City’s nerves, with Spanish midfielder Rodri glancing a header into the net. Nathan Ake got the second in the 54th minute, Gabriel Jesus made it three-nil and Fernandinho put the icing on the cake.

Earlier, a first-half strike from midfielder Naby Keita helped Liverpool secure a hard-earned 1-0 win at Newcastle United.
“It’s the most difficult of circumstances. A team in form, a crowd waiting for ages for proper success,” said Klopp. “Our people were outstanding and Newcastle are obviously a really passionate crowd. Winning here is special.”

After an early half-chance for Virgil van Dijk, Liverpool hit the front in the 19th minute through Keita when he cleverly dribbled past Martin Dubravka to slot home following a smart link-up with Diogo Jota.

The goal was met with furious protests by Newcastle players who reckoned James Milner had fouled Fabian Schar in the build-up but the VAR allowed the effort to stand.

Liverpool, with possibly one eye on the second leg of their Champions League semi-final against Villarreal on Tuesday, started without Mohamed Salah, Fabinho and Trent Alexander-Arnold but their absence was seldom felt as the visitors were barely troubled in the opening exchanges.

The victory lifts Burnley to 16th spot on 34 points from 34 games, five clear of Everton. Watford remain 19th on 22 points, seven behind Everton with four games left to play.
Norwich City were relegated after being beaten 2-0 at Aston Villa.