Argentina had no choice but return to Lusail, to face Mexico, and manifest a different denouement 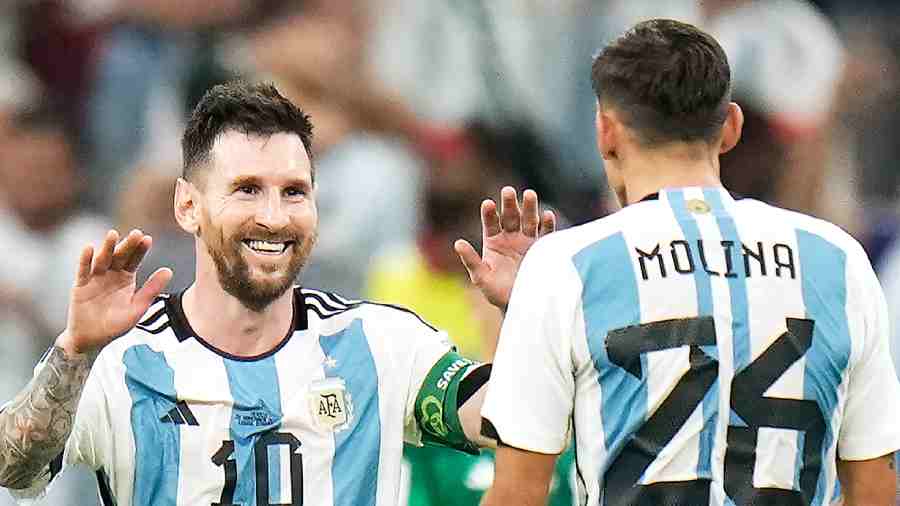 As he wrapped Enzo Fernández tightly in his arms, Lionel Messi could not help it. His Argentina teammates were screaming, full pelt, towards them. At their back, the stands were melting into a writhing, bubbling soup of sky blue and white. Messi saw it all, and, for the first time in what has felt like a long time, he smiled.

For someone who has spent the better part of two decades delivering moments of rare, soaring pleasure to millions of people on a weekly basis, Messi looks happy surprisingly infrequently. He tends, most of the time, towards the serious. He often looks concentrated, or focused, or intent.

Occasionally, he might look pensive, ruminative. More regularly than he might have liked, particularly in the past few years, he has had cause to look disappointed, either in himself or, more usually, a teammate. And then, of course, there is Messi in despair: the Messi with the sagging shoulders and the hollow eyes, watching his world crash down around him.

Four days ago, that was the Messi who had departed the field at Lusail, his dreams in tatters. Argentina had been beaten by Saudi Arabia, an ignominy that will haunt the country for some time, a shame that will be spoken of only in whispers for years, and its World Cup — his World Cup — hung by a thread.

That ghost has been at Argentina’s shoulder all week. In its immediate aftermath, as Argentina’s disconsolate players headed back by bus to their hotel, Messi demanded that his teammates remain united. He promised the fans that they would not be left “stranded” by a squad in which they have placed so much hope.

He knew, though, that the only way to dispatch ghosts was to confront them. Argentina had no choice but to return to Lusail, to face Mexico, and to manifest a different denouement. Defeat would end their involvement in the World Cup after just two games.

Even a tie would leave them on the brink of elimination from a tournament they harboured genuine hopes of winning. Already, they had no margin for error.

It showed. There was nothing imperious, nothing controlled about Argentina’s performance against Mexico. Lionel Scaloni’s team looked skittish from the first minute, brittle in defence and angst-ridden in attack. Rodrigo De Paul, supposedly the commanding central midfielder, endured a five-minute period in which he completed three passes: to Alexis Vega, Hirving Lozano and Daniele Orsato. Two of those were playing for Mexico. The other was the referee.

Even when the breakthrough came, it did little to ease the tension. The goal that broke the deadlock was scored, of course, by Messi; it was always going to be scored by Messi, at least in part because it was extremely clear by that stage that nobody else on the field — no matter what colour jersey they were wearing — was the slightest bit capable of scoring.

All Messi required was all that he has ever required, the narrowest sliver of light, the briefest hint of space. For the first time all evening, Mexico left him unattended on the edge of the penalty area. He took one touch to control the ball and another to sweep a low effort into the one pocket of the goal that Guillermo Ochoa could not quite reach.

Messi did not smile, then. There was nothing to smile about. Instead, he raced away, his arms outstretched, howling into the night. He ground to a halt in front of Argentina’s shirtless, delirious fans, all of the frustration and embarrassment and stress pouring out of him. He did not look happy. He looked determined, and intense, and just a little wild.

Besides, he knew that there was nothing to celebrate. Not yet. It would be something of a surprise if Messi was not, by now, conditioned to believe that the worst will happen in any given situation, to fear that there is always some disaster lying in wait. Mexico still had 20 minutes to score, to turn everything on its head, to leave Argentina crestfallen and heartbroken once more.

Those last few minutes must have seemed, to him, as if they took an age. Mexico buzzed around, menacing Argentina’s penalty area without ever making a breakthrough. Argentina did what it could to waste time, to draw the air from the game, to scrap by tooth and claw to hold what they already had.

Only when Fernández intervened did the storm break. It was the sort of goal that would have been distinctly familiar to Messi: the ball at the21-year-old Fernández’s feet at the corner of the penalty area, a defender looming directly in front of him. He shimmied his hips, just quick enough to destabilise his opponent, to knock him ever so slightly off balance. He shifted his weight on to his left leg and swept a curling shot past Ochoa’s outstretched arm.

It was the sort of goal that Messi has scored countless times — dozens, certainly, probably hundreds — over the course of a career in which he has made the extraordinary look routine. This time, he seemed especially delighted that he had not been required to intervene yet again. He was the first to reach Fernández, sweeping him into a bear hug, lifting him from the ground.

He did it with a broad grin. Messi, at last, was happy, and he was determined to enjoy it. Soon after the final whistle, he led his teammates over to the thousands upon thousands of Argentine fans, the ones who had taken this vast, gold-rimmed stadium, a literalist monument to the luxury and the indulgence of this World Cup, and somehow transformed a pocket of it into the Bombonera or the Monumental or the crumbling Nuevo Gasométro.

For a few minutes, Messi stood there, his arms beating out a rhythm, his voice joining them in song. High above his head, in the soaring upper tier of the Lusail, a vast flag had appeared, two stripes of sky blue sandwiching one of white. It stretched half the length of the grandstand, but had somehow remained hidden until that moment. Now, it was unfurled. Messi was smiling, for the first time in along time, and Argentina was ready to show its true colours.