After an average first half with no shots on target, Scaloni-coached side comes good in the second half 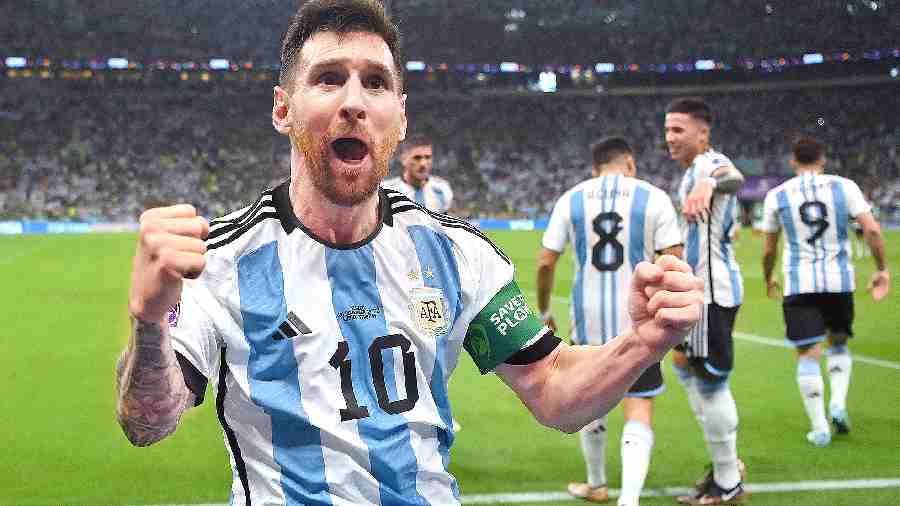 Lionel Messi lets out a roar after scoring Argentina’s first goal in their do-or-die match against Mexico on Saturday.
Getty Images
Our Web Desk   |   Published 26.11.22, 03:10 PM

At the same Lusail Stadium where they were humbled by Saudi Arabia in their World Cup opener, Argentina beat Saturday’s rivals 2-0.

Just when it seemed that Argentina would not be able to breach the Mexican fortress, Messi, receiving a ball almost 25 yards out in the 64th minute, weaved one of his left-foot magic tricks which has endeared him to millions of fans around the world.

The grounder was inch-perfect, just beyond the reach of the Mexican keeper.

What the goal meant to Messi, who now has eight World Cup goals (the same as Diego Maradona), and Argentina was quite evident from the emotions on his face.

The goal put a spring in Argentina’s steps and substitute Enzo Fernandez scored a screamer in the 87th minute to stamp his team’s dominance.

Argentina will play their last group match against Poland on Wednesday.

France through to Round of 16

France on Saturday became the first team to qualify for the knockouts of the World Cup, beating Denmark 2-1 with talismanic winger Kylian Mbappe scoring a brace.

Both teams went to the dug out after half-time with score tied at 0-0.

Didier Deschamp's side increased the tempo in the second half and was rewarded with the lead at the hour mark via Kylian Mbappe. The lead lasted less than seven minutes though, as Andreas Christensen of Denmark put his team back into the game again.

France was pegged back, but the PSG winger had other ideas. Mbappe scored again towards the closing stages of the match, ensuring France qualified to the knockout stage with a game to spare.

Raphael Varane started at centre back for France against Denmark in their Group D clash at the World Cup on Saturday after fully recovering from a hamstring injury.  Varane paired up with Dayot Upamecano while Jules Kounde took over from Benjamin Pavard in the right-back position.

Aurelien Tchouameni and Adrien Rabiot start in midfield with Antoine Griezmann in support of the offensive trio of Ousmane Dembele, Kylian Mbappe and Olivier Giroud.

For Denmark, coach Kasper Hjulmand replaced injured midfielder Thomas Delaney with Mikkel Damsgaard, and Andreas Cornelius got the nod up front as Kasper Dolberg was dropped to the bench.

France have plenty to play for

Robert Lewandowski scored his first ever World Cup goal as Poland brought Saudi Arabia back down to earth with a bump on Saturday with a 2-0 Group C victory that rejuvenated their tournament campaign, reports Reuters.

Lewandowski, who missed a penalty in Poland's opening draw with Mexico, was visibly emotional after finally finding the net. He pounced on a mistake in the 82nd minute to double Poland's advantage after Piotr Zielinski had given them a first-half lead.

After completing one of the tournament's greatest ever shocks when they cut Argentina down to size in their opener, the Saudis, found Poland a tougher nut to crack at the Education City Stadium. The Green Falcons failed to convert a first-half penalty.

The win moved Poland to four points, one more than the Saudis, and left them needing a draw in their final game against Argentina next Wednesday to guarantee their spot in the knockouts.

Saudi Arabia, the second-lowest ranked team in the tournament, will head into their final match against Mexico with all still to play for, while Argentina play Mexico later on Saturday.

It was effectively a home match for the Saudis with their raucous fans, who had made the short journey across the border, far outnumbering their Polish counterparts.

Their team gave them plenty to shout about too in the early stages as they were by far the more ambitious, pressing high against the Poles, who seemed lethargic in comparison.

The encounter was spiky. The Saudis frequently hit the deck, with the referee, who dished out four yellow cards in five first-half minutes, seeming willing to oblige a feisty crowd baying for punishment.

There were half-chances for both sides before the game sprang to life in the 39th minute when Poland shook themselves from their slumber to take the lead.

Matty Cash skipped down the right and crossed low for Lewandowski who lifted it over the keeper and pulled it back for Zielinski to fire into the roof of the net.

Their hopes of cruising through to halftime, however, were ended four minutes later when Krystian Bielik made minimal contact with the back of Saleh Al-Shehri's leg and he hit the turf.

The referee had initially waved away Saudi appeals but he was instructed to look at the VAR monitor and pointed to the spot, sparking celebrations from the Saudi players.

Those proved premature, however, as Salem Al-Dawsari's low effort was palmed away one-handed by Wojciech Szczesny, who was quickly on his feet to parry the follow up from Mohammed Al-Breik brilliantly over the bar.

The Saudis were almost level early in the second half when substitute Nawaf Al-Abed burst through the Polish rearguard but took a tumble as defenders closed in. The ball found its way to Al-Dawsari but his follow-up was well saved by Szczesny's legs.

A better chance was then spurned by Firas Al-Buraikan who wildly slashed his effort wide with only Szczesny to beat.

Poland could have extended their lead in the second half when Arkadiusz Milik's header rattled the crossbar while Lewandowski hit the post with an effort that deflected off his knee.

Lewandowski, who had drawn a blank in his four previous World Cup games, did not have to wait too much longer, however, for his goal.

Abdulelah Al-Malki slipped and Lewandowski pounced, robbing him of the ball before sliding a tidy finish beyond Mohamed Al-Owais and into the net, with the striker seemingly in tears as he was greeted by team mates.

12:30 AM, Perform or perish: Against Mexico, need Messi, not messy

The Mexican fans have coined a slogan that has caught everyone’s imagination. “Messi go, Messi go.” Since last Tuesday, when Argentina lost to Saudi Arabia, the same taunt is echoing everywhere in Doha.

“Messi go Messi go”. For a moment it sounds like “Mexico, Mexico”. The Argentine fans, already at the receiving end enduring snide remarks, had a brawl with some Mexican fans at one of the fan zones last week. Then there is the Saudi chant. Out in numbers and draped in their national flag, the Saudis have taken the streets by storm and they sing “Where is Messi? We broke his eye!”

This is their first World Cup victory in 12 years as they provisionally moved up to second in Group D behind reigning champions France, reports Reuters.

Striker Mitchell Duke scored midway through the first half with a glancing header past keeper Aymen Dahmen to give Australia the lead, while Tunisia's best chance came when skipper Youssef Msakni shot just wide.

Tunisia brought on the squad's top scorer Wahbi Khazri in the second half as they upped the tempo in search of an equaliser, but the Australian defence stood firm with goalkeeper and skipper Mat Ryan a calming presence at the back.

The victory snapped Australia's seven-match winless run at World Cups since they last picked up three points in a victory over Serbia in 2010. France play Denmark in the other Group D encounter later on Saturday.

Australia lead Tunisia 1-0 at halftime in their second World Cup Group D game on Saturday, after striker Mitchell Duke opened the scoring in the 23rd minute at the Al Janoub Stadium, reports Reuters.

Australia, looking to win their first World Cup match since 2010, scored from a counter-attack when Duke got on the end of Craig Goodwin's cross and directed a glancing header past the goalkeeper

Australia and Tunisia both made one change for their World Cup Group D clash on Saturday with no place in the starting line-ups for Socceroos midfielder Ajdin Hrustic or feted Tunisian striker Wahbi Khazri, according to Reuters.

Australia coach Graham Arnold had flagged his change on Friday with Fran Karacic coming into the defence at right back in place of the injured Nathaniel Atkinson.

Hrustic, who has been struggling with an ankle injury, had been expected to return for a game Australia need to get something out of to stay alive in the tournament after being thrashed 4-1 by France at the same Al Janoub Stadium on Tuesday.

Tunisia are in a much stronger position and coach Jalel Kadri largely kept faith with the team that drew 0-0 with Denmark in their opener. Khazri remains on the bench with Naim Sliti coming into the attack for Anis Ben Slimane.

Advantage Australia at the break

First game of the day!