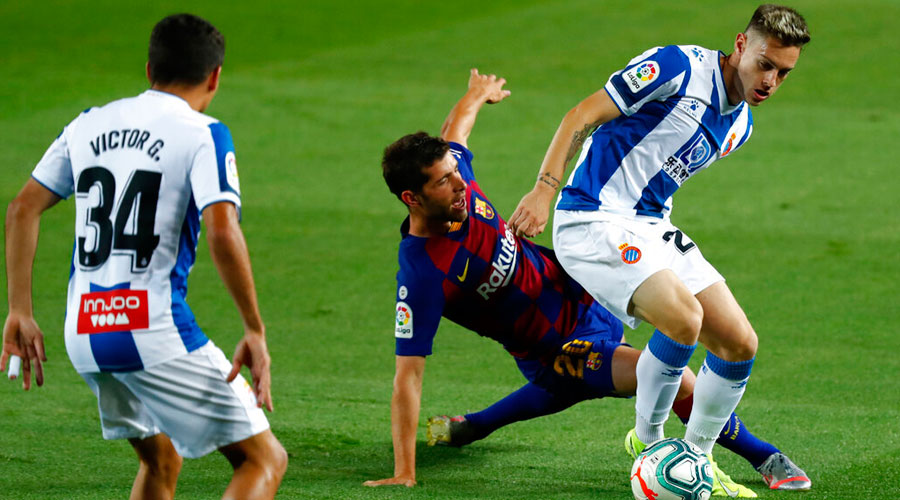 Sergi Roberto fights for the ball against Pol Lozano (right) during the Spanish La Liga soccer match between FC Barcelona and RCD Espanyol in Barcelona on Wednesday.
AP
Our Correspondent   |   Calcutta   |   Published 09.07.20, 03:11 AM

La Liga refuted Barcelona's claim that only one team in the league is benefiting from VAR (video assistant referee).

The other day, Barcelona spokesperson Josep Vives, taking a veiled swipe at Real Madrid, had said "there's no fairness in the application" of the VAR with "no equanimity at times."

Responding to a query related to the matter, La Liga India managing director Jose Antonio Cachaza, during a virtual media conference on Wednesday, said: "Officially, (I've) no take on that, but VAR is a good advancement.

"I used to be a football referee - a semi-pro - so I just can't even think of referees taking (erroneous) decisions knowingly or intentionally. Yes, there can be mistakes and VAR can also be improved. But there are no foul intentions by the VAR referee or the other match officials."

The remaining matches of the ongoing La Liga, Cachaza iterated, will continue to be held in empty stadiums as fans may not return before September, that too partially. That means next season.

"We cannot give you a concrete answer. Basically, La Liga is working these out with the Spanish government and authorities.

"The last development says that it is 100 per cent sure that the four weeks remaining in this La Liga will be finished behind closed doors. There is hope to return with partial attendance in September. I think September 12 is when La Liga will be back," he said.

La Liga does have plans for fans in India. It may come up with fan parks, but all such plans will begin to take shape only when the pandemic situation eases.

"We are working on plans for next season in India. We don't have a draft yet, but we don't think fan events will be safe to do at least before next January.

"The situation is not too safe not just in India, but everywhere in the world. It's not safe to have fan events unless a vaccine is out," Cachaza emphasised.