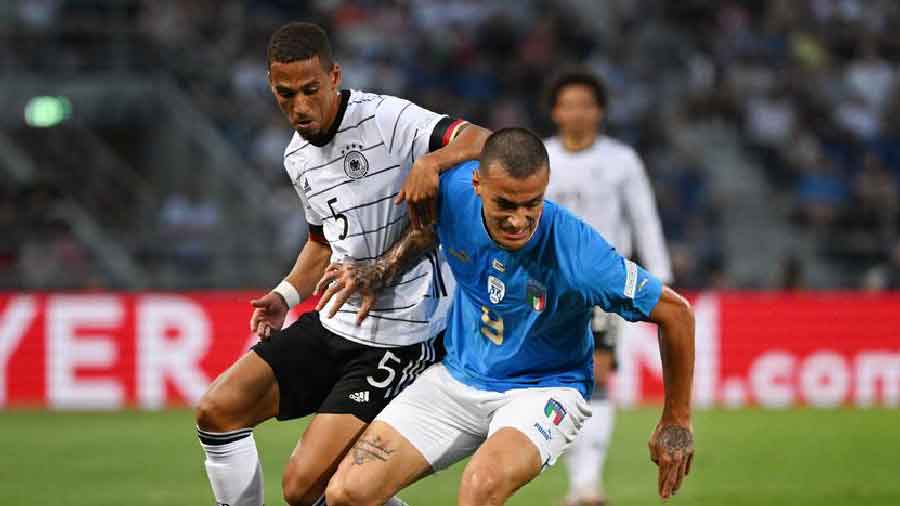 In the first of four games in ten days, Germany got their new Nations League campaign up and running with a point against Italy in Bologna. Joshua Kimmich equalized for Germany just minutes after they'd fallen behind.

It took over 70 minutes and an Italy goal for Germany to finally register a serious shot on target in Bologna – but it finally arrived when it mattered.

There was a hint of handball when the ball bounced off Timo Werner in the box, but the Chelsea wasn't the goal-scorer and so, according to current rules governing handball, there was nothing to stop Joshua Kimmich from following up and firing the ball into the back of the net.

"A no. 6 who follows up, gets into the box and gets a shot away, that's good to see," praised head coach Hansi Flick.

Just three minutes after falling behind to a Lorenzo Pellegrini tap-in, Germany were level and on their way to a unspectacular but, on balance, deserved point to kick-off their Nations League campaign.

"Whether the point was deserved or not, I don't know, but it was too little," an honest Kimmich told RTL post-match. "We wanted to win.

"We know that Italy are in transition at the moment and didn’t necessarily have their best team on the pitch, so we wanted to win. We didn't always manage to play our game, we weren't as intense as we wanted to be, perhaps that was down to the humidity and heat.

"I know I had a chance to make it 2-1 as well, maybe I should have scored that."

Chances for Goretzka and Gnabry

Germany started with good spells of possession and moments of aggressive pressing reminiscent of Bayern Munich under Hansi Flick, but couldn't conjure more than a blocked Thomas Müller effort and a high Leon Goretzka shot.

Italy worked their way into the game and came closest to opening the scoring when Gianluca Scamacca's long-range drive glanced off the post.

Germany then had the best chance of the game when, after patient work from Goretzka, the ball fell to Serge Gnabry just 12 meters from goal – but the Bayern winger lashed his shot over the bar.

A series of on-field disputes and substitutes robbed the game of momentum at the start of the second half before Pellegrini converted Willfried Gnonto's cross – begging the question as to whether Germany would be able to rally again for the final 20 minutes or not.

But Kimmich quickly provided the answer.

Germany's Nation League campaign continues in Munich on Tuesday against England, who surprisingly lost to Hungary in Budapest in the other game in Group 3 earlier on Saturday.