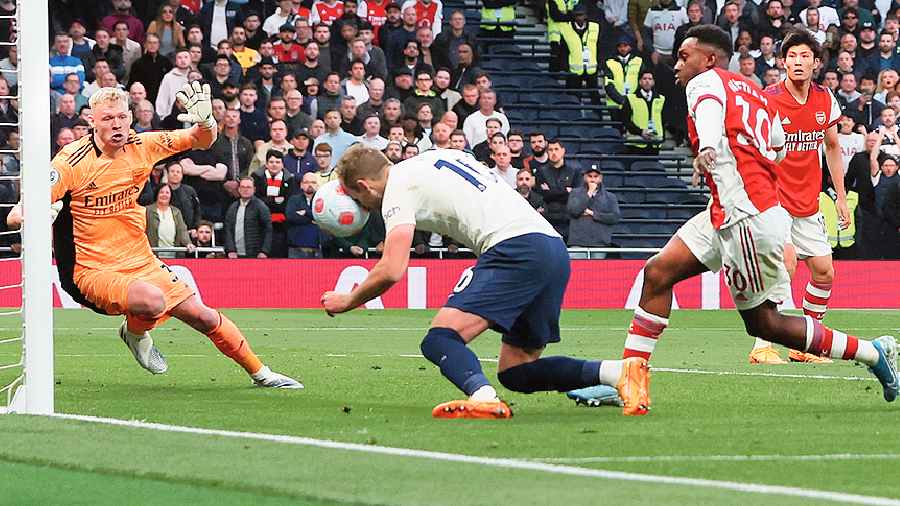 Harry Kane struck twice as Tottenham Hotspur stayed on track for a top-four finish in the Premier League with a 3-0 demolition of Arsenal in a rambunctious north London Derby on Thursday.

Victory for Arsenal at the home of their arch-rivals would have secured their first top-four finish since 2016 and a Champions League place, but they suffered a dismal night.

Kane opened the scoring from the penalty spot in the 22nd before Arsenal had Rob Holding sent off for a second yellow card 10 minutes later, both for clumsy fouls on Son Heung-min.

Kane’s diving header made it 2-0 in the 37th minute to send Tottenham’s fans into delirium. The volume went up another notch immediately after half-time when Son fired a shot past Aaron Ramsdale for his 21st league goal of the season to kill off any hope of an Arsenal fightback.

Tottenham could have won by more and despite the celebrations from the home fans they remain fifth and Arsenal are still in the driving seat in the battle for fourth place.

Tottenham manager Antonio Conte told his Arsenal counterpart Mikel Arteta to stop complaining and focus on his own team after the Arsenal boss criticised the referee following Thursday’s defeat.

Arteta was left fuming after referee Paul Tierney pointed to the spot in the 22nd minute — which Harry Kane converted — and then showed a second yellow to Rob Holding 11 minutes later for a foul on Son Heung-min.

“If I say what I think I am suspended for six months,” said Arteta.“I don’t know how to lie so I prefer not to say what I think... it’s a shame because such a beautiful game was destroyed.”