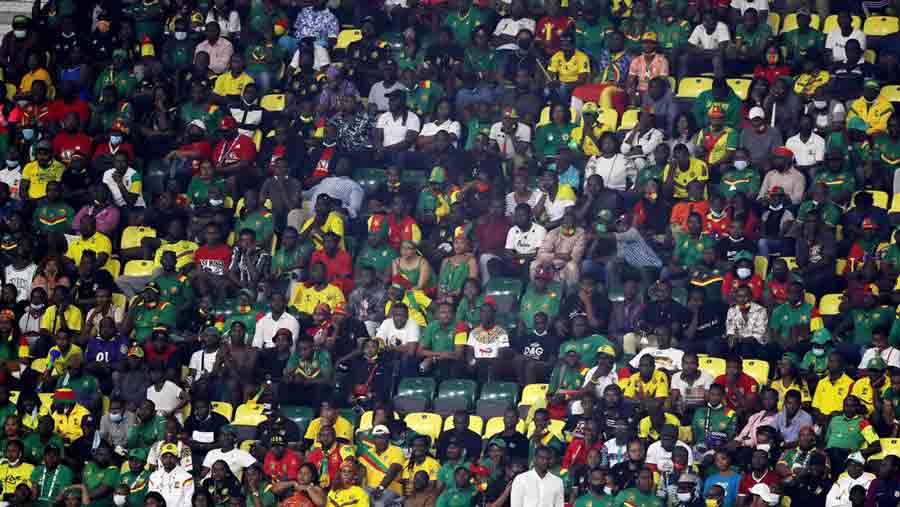 Naseri Paul Biya, the governor of the central region of Cameroon, hinted that there could be more deaths.
Twitter
Agencies   |   Published 26.01.22, 01:32 AM

At least eight people died and 38 were injured in a stampede when fans stormed a stadium hosting an Africa Cup of Nations soccer match in Cameroon’s capital on Monday, the government said.

Images shared on social media showed a panicked crowd trying to squeeze through a narrow entrance gate at the newly built Olembe stadium in Yaounde that was hosting a round-of-16 game between Cameroon and Comoros.

One video showed dozens of fans scrambling over the stadium fence as a police officer walked by.

Naseri Paul Biya, the governor of the central region of Cameroon, hinted that there could be more deaths. “We are not in position to give you the total number of casualties,” he said on Monday.

Officials at the nearby Messassi hospital said they received many injured people. The officials said the hospital wasn’t capable of treating all of them. “Some of the injured are in desperate condition,” said Olinga Prudence, a nurse.

Witnesses said children were among those caught up in the crush.

The stampede comes as a heavy blow for the tournament, which had grown in

excitement on the pitch in recent days thanks to some match upsets but which was under scrutiny for a lack of readiness beforehand. Covid-19 and insecurity caused by a separatist insurgency also complicated preparations.

“CAF (Confederation of African Football) is currently investigating the situation and trying to get more details on what transpired. We are in constant communication with Cameroon government and the local organising committee,” the continental governing body of the game said.

High school teacher Vanessa Tchouanzi had come to see the match on Monday night with her friend, Veronique, who was also a teacher.

As Tchouanzi tried to enter the stadium, ticket collectors became overwhelmed by a rush of people trying to get into the ground before kick-off. Tchouanzi and Veronique were knocked to the ground. Squeezed by the rush, Tchouanzi lost consciousness before someone pulled her up and away from the crowd.

A few minutes later, Tchouanzi found Veronique on the ground, unresponsive with a weak pulse. She was rushed to hospital but died soon after.

“She couldn’t take the shock, the weight of all those people,” Tchouanzi said through a flood of tears.

Following a low turnout in the first round games, Cameroon authorities have thrown open stadium gates and given out free tickets to lure fans.