Short-term venue changes will also be permitted if health reasons dictate such a need: DFL 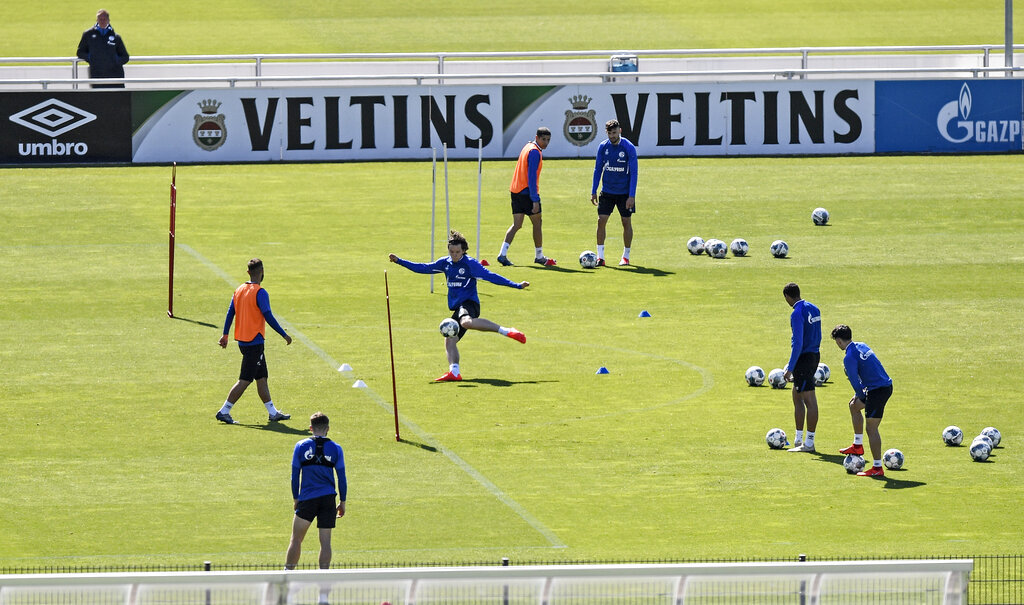 Players of Bundesliga football club Schalke 04 exercise in Gelsenkirchen, Germany on Thursday, May 14, 2020. Bundesliga will now restart on May 16, 2020 when Borussia Dortmund will play the derby against FC Schalke 04 at home without spectators due to the coronavirus outbreak.
(AP Photo/Martin Meissner)
Agencies   |   Munich   |   Published 14.05.20, 10:50 PM

Bundesliga teams will be allowed up to five substitutions per match when it restarts on Saturday after the coronavirus stoppage, while teams will be relegated provided the season is completed, the German football league (DFL) said on Thursday.

Short-term venue changes will also be permitted if health reasons dictate such a need and the season will continue beyond its re-scheduled finish date of June 30 and into July if necessary, the DFL said following a general assembly.

The DFL said that all but one of its 36 member-clubs voted in favour of maintaining relegation.

All eyes are on match day as Borussia Dortmund’s young stars Erling Braut Haaland and Jadon Sancho will be hunting more goals in “the most unusual Derby in history” against Schalke.

Dortmund usually expect 82,000 spectators at Signal Iduna Park for a home Derby, but the stadium will be near-empty. Even national team coach Joachim Loew will not be allowed in to watch his Germany players live on their return to action. “A lot of things will start from scratch on Saturday,” Dortmund winger Julian Brandt said. “There will be no real advantages and disadvantages to playing home or away.”

Tottenham manager Jose Mourinho says he is “desperate” for the return of Premier League action despite mounting concerns about the English top-flight’s restart plans.

Several stars have gone public with fears about resuming the season during the coronavirus crisis. But Mourinho said he would relish the chance to get back to work despite the challenges and risks posed by the pandemic.

“I have not asked for any delay,” Mourinho said in a statement on Thursday. “I want to train, and I am desperate for the Premier League to return as soon as it is safe to do so, particularly now we are seeing other leagues preparing to return to action.”

Mourinho was forced to apologise in April after being spotted breaking lockdown restrictions to hold a training session with midfielder Tanguy Ndombele in a public park. Serge Aurier and Moussa Sissoko also had to say sorry after the pair flouted social-distancing guidelines to train together. Despite those incidents, Mourinho is happy with the way his squad have kept themselves fit during the lockdown.

The head of Italy’s Olympic committee (CONI) believes there is a “99 per cent” chance that the government will allow the Serie A to resume on June 13, he said on Thursday.

However, CONI president Giovanni Malago said he could not predict if clubs would be able to complete the season.

Serie A clubs voted on Wednesday to set June 13 as the resumption date for the league.